Two volleyball players from Bragg Creek are excited and hopeful as they enter another season of U SPORTS competition with the Mount Royal University Cougars. Fifth-year middle Nicole Zalasky is the new captain of the women’s team.
Oct 23, 2018 12:01 AM By: Scott Strasser 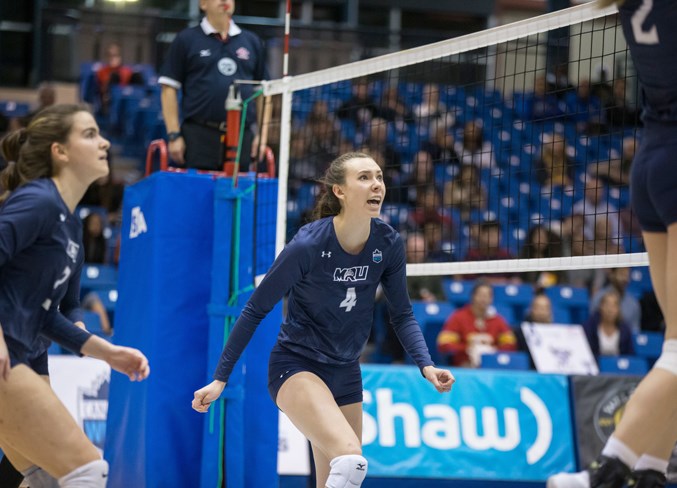 Fifth-year middle Nicole Zalasky, who hails from Bragg Creek, was named the Mount Royal University Cougars’ captain for the 2018-19 U Sports season.

Two volleyball players from Bragg Creek are excited and hopeful as they enter another season of U SPORTS competition with the Mount Royal University Cougars. Fifth-year middle Nicole Zalasky is the new captain of the women’s team. The 22-year-old psychology major said her goal is to encompass the role of the team’s official leader. “This is the first year I’ve been captain, so I definitely want to try and make this team what it needs to be, and try to promote the new players on the team,” she said. “It’s a lot of pressure, sometimes, for sure. But this team is great – they respond well to everything and there’s so many good leaders on the court that being the team captain is really nothing.” Since joining the Cougars in 2014, the Bragg Creek native has registered 196 kills, 107 digs, 17 solo blocks and 172 block assists in 72 conference matches for the Cougars. Last year was Zalasky’s strongest – stats-wise – of her individual career. She recorded 95 kills, 49 digs, 10 solo blocks and 74 block assists, stepping onto the court for all 24 of MRU’s matches. Head coach Sandra Lamb said Zalasky’s extensive playing experience has helped her grow into a leadership role this season. “[Zalasky] is a quiet leader, but when she says things, she’s heard,” Lamb said. “Her play and maturity on the court is exactly what this younger team needs. “She has been our number-one blocking middle for the last couple years, and the stability she brings is very welcome at this time.” Zalasky and the Cougars kicked off the 2018-19 U SPORTS regular season Oct. 19 to 20 (after press time) with a home series against the University of Manitoba. Despite a young roster with only two players above third year, Zalasky said, MRU is optimistic it can improve upon its 11-13 record from last season. “We have a lot of new faces from last year, but we’re looking pretty good,” she said. “We’ve had some preseason tournaments, and those ended well for us.” Gaining experience On the men’s side, Bragg Creek’s Jackson Brennan is entering his second year with the Cougars. The 19-year-old said having a year of university volleyball under his belt has increased his confidence heading into the 2018-19 campaign. “It’s unbelievable how far you come after just a year of playing at this level,” he said, adding playing against older opposition has helped his development. “When you get into post-secondary, you’re 18 and playing against guys who are 23, who have been playing in this league for the past four years. You learn a lot just watching the games and guys play.” As a rookie last season, Brennan enjoyed plenty of playing time as the back-up setter for Tanner Greves. Brennan made the court 14 times for the Cougars and assisted on 92 points. Though he still expects to be the second in command this year, in Greves’ final season with the Cougars, Brennan said he’s optimistic he’ll feature more often than he did during his rookie campaign. “I think I can push for more [playing time] this year,” he said. “I was happy with what I got last year – I didn’t expect that much, right away. I got my chances, and you just have to take advantage of those opportunities.” Head coach Shawn Sky said he has full confidence the 19-year-old business major can deliver on the court, when called upon. “He does a good job, in terms of running an offence, and he’s progressing as a future leader in our program,” he said. The men’s team is coming off a disappointing 2017-18, winning just seven of its 25 matches. But a positive preseason bodes well for the team’s chances this year, according to Sky. “I’m a fan of our culture and where we’re at,” he said. “We have guys stepping up in leadership roles, and I like our cohesion and culture.” The Cougars played its first conference matches of the season Oct. 19 and 20 (after press time) against the University of Manitoba. For schedules or other information on MRU’s volleyball teams, visit mrucougars.com