There will be no Mac's AAA Midget World Invitational Hockey Tournament for the Airdrie CFR Chemical Bisons to compete in this Christmas, after the tournament was cancelled in the fall due to the spread of COVID-19.
Dec 17, 2020 10:00 AM By: Jordan Stricker 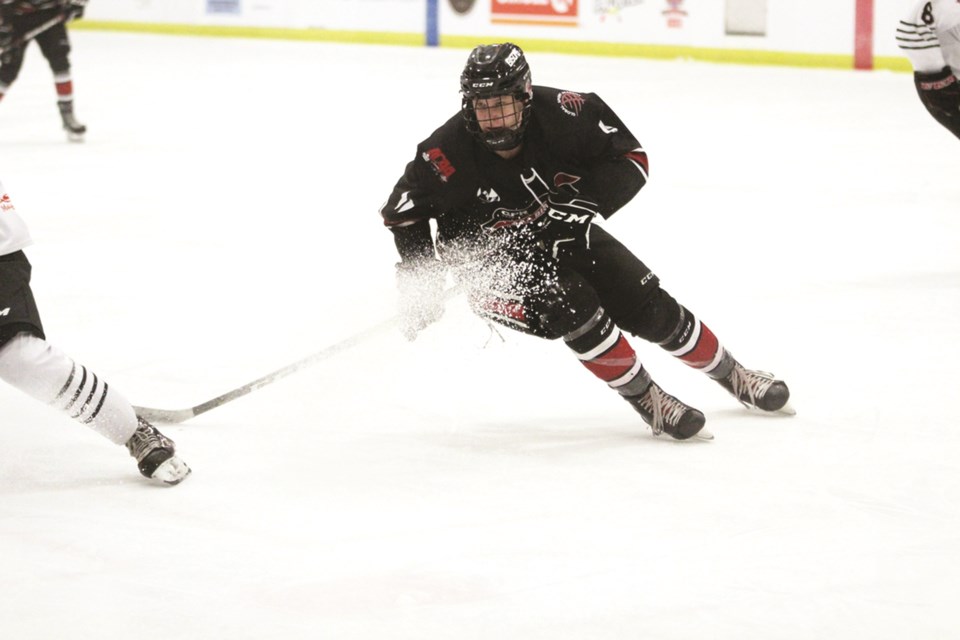 The Airdrie CFR Chemicals Bisons will have to wait until next year to compete in the Mac's AAA Midget World Invitational Hockey Tournament, as it has been cancelled due to COVID-19. File photo/Airdrie City View

There will be no Mac's AAA Midget World Invitational Hockey Tournament for the Airdrie CFR Chemical Bisons to compete in this Christmas, after the U18 tournament was cancelled in the fall due to the spread of COVID-19.

“The social responsibility in regard to the safety of the participants, volunteers, spectators and facility staff is one of the prime factors for this decision,” stated a letter signed by Larry Herbison, the Mac’s tournament chairman. “The challenges for international teams’ participation, western Canadian teams, associated hotel and team logistics while maintaining current guidelines associated with COVID-19 could not be met to ensure the safety of everyone.”

Bisons coach Dustin Taylor said he was not surprised the annual tournament was cancelled, but it was still disappointing when the announcement came. The squad has competed in the Mac’s tournament – one of the most prestigious and well-known U18 hockey tournaments in North America – for the last three years, since the team relocated to Airdrie from Strathmore.

“It’s a loss of an opportunity, and you have to empathize with the kids,” said Taylor, who is in his third season of coaching the AAA hockey team. “For many of these kids, this may be the top [level] that they ever achieve in hockey. To have that stage taken away is quite unfortunate.”

According to macstournament.ab.ca, the tournament is held annually from Dec. 26 to Jan. 1 in Calgary. The Mac’s features 25 AAA U18 teams who are invited to compete from across Canada, the United States and Europe. The website said the championship game, which takes place at the Scotiabank Saddledome, has been played in front of as many as 10,000 spectators.

Taylor said he can sympathize with his players’ disappointment, not only as a coach, but also as a former player on the team. He said the tournament radiates hype and excitement and is something the Bisons look forward to every season.

“It’s one of the highlights of the year, being able to perform on that level of stage,” he said.

Up until the Alberta Elite Hockey League (AEHL) was temporarily halted due to the spread of COVID-19, the Bisons had recorded a 1-3-1 record in their five games so far this season. Taylor said while the 2020-21 campaign remains up in the air, he, his assistant coaches and players have been able to adapt and move forward through the difficult time.

“Kids often ask how you stay motivated with nothing in front of you,” Taylor said. “The reason these kids do so much is because they want to work hard for something. Right now, they don’t really have something to work hard for, so I can understand why it is so difficult to find that motivation.”

Prior to the AEHL season being halted, Taylor said he was feeling very positive about the Bisons’ prospects this year. While Airdrie finished at the bottom of the league standings in 2019-20, and went winless at the 2019 version of the Mac's, he said many of the team’s returning players are now a year older and more experienced, with a season in Alberta’s top U18 hockey league under their belts.

“We have a very mature group,” he said. “The feeling we have as a coaching staff is that we would finish top three and set up a great run in the playoffs. We also felt we would be in the final of the Mac’s tournament. It’s unfortunate we can’t do anything to aspire to that goal.”

From the players’ perspective, team captain Ethan Tinevez, 17, said he was disappointed to learn the Mac’s would be cancelled.

“Going into my third year along with some of the other guys, this was our last year to be in the tournament,” he said. “We had a better team to compete this year, so I was pretty disappointed.”

Second-year forward Cody Pisarczyk echoed that sentiment, adding that playing in the Mac’s tournament is something he always looked forward to as a young hockey player. He played in his first Mac’s as a first-year Bisons player last season.

“I remember going to watch the tournament as a kid, it was the big thing back then,” he said. “It was a bad feeling knowing we wouldn’t be playing this year, especially because playing last year was so awesome.”

He added that if or when the 2020-21 season is allowed to resume, the Bisons will be ready to go.