“Some people don’t believe in moral victories, but for us to be that close and play that hard throughout the entire game means a lot,” Lucas said. “I think it bodes well for the rest of the season.”

Taking on the perennial powerhouse of the Rocky View Sports Association (RVSA) in the first game of the 2022 season proved just too tough a task for the Bert Church Chargers on Aug. 26.

But the loss wasn't for a lack of effort, and the final result was much closer than many would have predicted.

Hosting the seven-time RVSA championship-defending Cochrane Cobras last Friday, the Chargers kicked off the 2022 high-school football season with a 44-27 defeat.

However, Bert Church head coach Tony Lucas praised his players' efforts in a game that, with just a few minutes left on the clock, was still anyone's contest. While the final scoreline favoured the perennially dominant Cobras, the season-opener was a back-and-forth encounter that saw the Chargers down by just seven points with two minutes left in the game.

“Some people don’t believe in moral victories, but for us to be that close and play that hard throughout the entire game means a lot,” Lucas said. “I think it bodes well for the rest of the season.”

Cochrane took a 14-0 lead early into the game, but Bert Church crawled their way back into the contest in the second quarter, tying it up courtesy of some energetic runs and touchdowns from Grade 12 running back Damien Cherry. 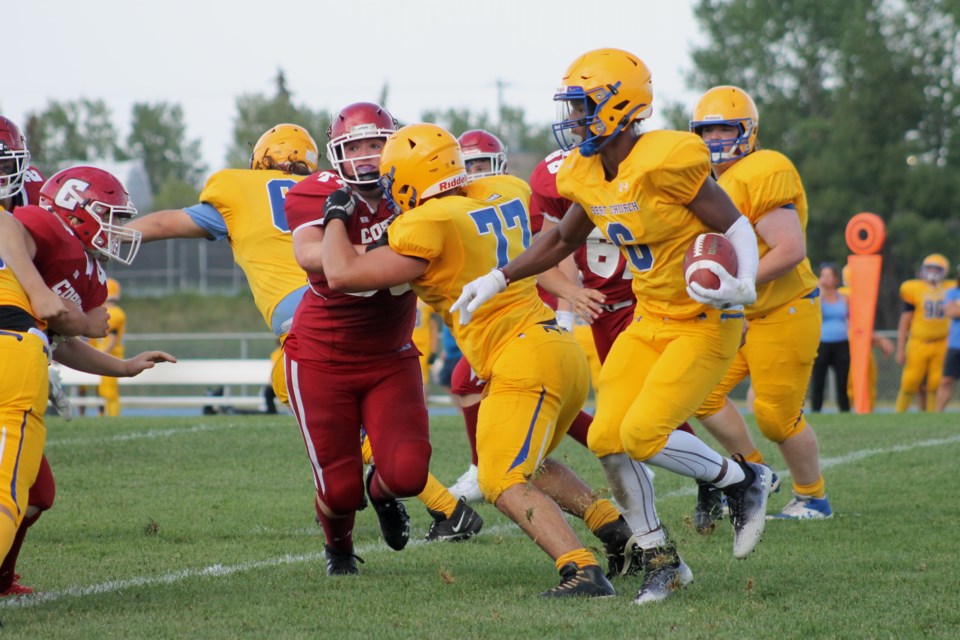 “We know he’s a phenomenal talent and that he can do that stuff,” said Lucas of Cherry's two-touchdown performance. “He amazes us, even in practice. But he was a really good leader on the sidelines today. He was picking up his teammates, giving them credit. It shows a lot of maturity over the last year.

“Not that he was difficult last year – he wasn’t – but he’s going even more in [a positive] direction. It’s not often you get that kind of talent with that kind of person.”

The crimson-clad visitors regained their two-touchdown cushion by halftime thanks to a catch-and-run into the end zone by Grade 12 running back Ethan Clazie and a rushing TD by quarterback Christian Golem. The Cobras went into the locker room for the break up 27-14.

#Cochrane regains the lead on their next drive, though it’s hard to see from this clip. Ethan Clazie with the carry, I believe? After the convert it’s 21-14 pic.twitter.com/XtK7NYa4S2

It was a low-scoring third quarter – Bert Church’s Grade 12 receiver Charlie Wiersma was the only player to put points on the board, bringing one back for the hosts with a catch-and-run into the end zone down the left side.

Since the Chargers’ defence managed to keep the Cobras out of their end zone, it meant the score was 27-21 with just one quarter left to play.

“I think the mindset was about owning the next play, and we were able to do that,” Lucas said. “It can be hard to do sometimes, but if you keep your mind off the scoreboard and keep your eyes on the field, you can do that.

“We try to tell the kids it’s about making plays. High school [football] is about match-ups sometimes. You’ve got to beat the guy across from you, and we were able to do that sometimes today and it made me really happy.” 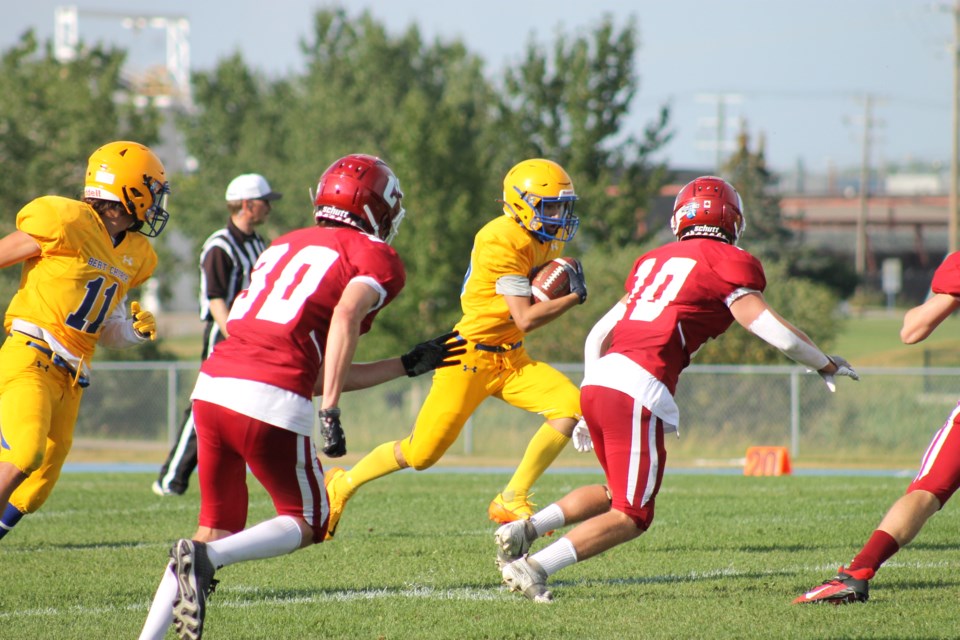 Both teams added TDs to their haul in the final frame. The Cobras capitalized on a defensive penalty from Bert Church to put their o-line into positive field position on their first drive of the quarter, and Clazie scored on a play that made the score 34-21 with just under 10 minutes left on the clock.

But five minutes later, Chargers’ Zack McKillop found space in the end zone on Bert Church's next drive and caught a pass from quarterback Wyatt Cannon, which meant it was 34-27.

Lucas praised Cannon's performance in the season-opener. The Grade 12 pivot has replaced the Chargers' previous quarterback Ben Klassen, who is now attending a private high-school in the United States to help pursue his football career.

“[Cannon] threw a pick-six right at the beginning of the game, but to have the resilience to deal with that and carry on was great,” Lucas said. “He, like the rest of us – including the coaches – have a lot to work on, but he made two touchdown passes, moved around in the pocket nicely, and showed a lot of poise.”

Showcasing why he was selected for Team Alberta last year, Clazie scored one more touchdown for the Cobras on their next drive, before the visitors added an insurance field goal in the final two minutes to put the game out of reach for Bert Church. 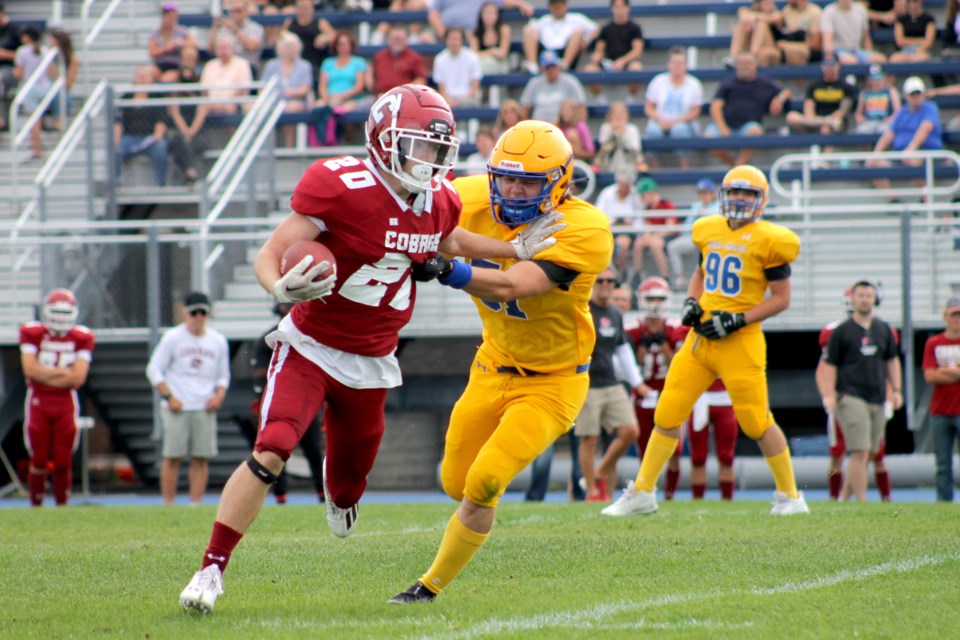 Despite the loss, Wiersma said the Chargers players can hold their heads high.

“We lost a lot of good players last season, but we executed, played our positions, and gave them a good ball game,” said the 16-year-old receiver.

“Even the score, I was surprised. Most of us were excited.”

Next up for the Chargers is another home tilt against a Cochrane-based team, when they take on the Bow Valley Bobcats on Sept. 3.

Over on the west side of the city, Airdrie's two other high-school football programs are eagerly preparing to kick off their own respective 2022 campaigns. And for the second year in a row, it will be against each other.

The Mustangs – last year's runners-up in the RVSA – are coming off a 29-22 win in a preseason exhibition game against the Grande Prairie Phoenix. That match-up was held immediately following Bert Church's game against Cochrane.

Kick off for the West Side Championship is slated for 4:30 p.m. p.m. at Ed Eggerer Athletic Park.