Darrell Belyk is going back to the Canadian Arm Wrestling Championships.
0
Jun 10, 2010 12:00 AM By: Airdrie Today Staff 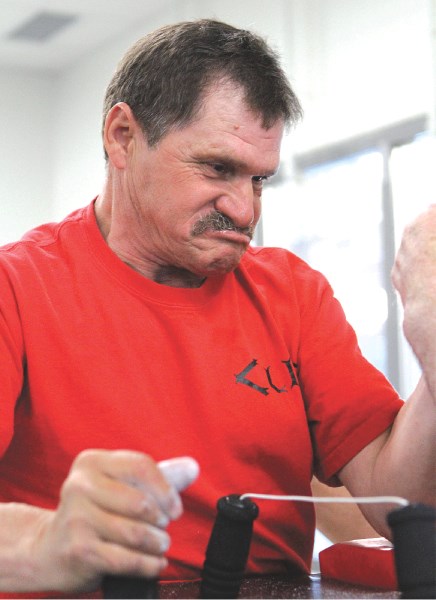 Darrell Belyk is going back to the Canadian Arm Wrestling Championships.

And this time he’ll be joined by some of his teammates, after winning the master’s men’s left 0-176 pound division at the 2010 Alberta Arm Wrestling Championships at Genesis Place on June 5.

More than 80 athletes competed at the one-day tournament and Belyk said he was happy with both the results for the local club, as well as the event itself.

“It turned out quite well and the volunteers I did have put it together for us – they showed Airdrie off,” said Belyk, who started the CLAWS of Airdrie and was the event’s main organizer.

“I had many people come to me and say ‘This is a great event and a great facility to hold it in.’ That’s a pat on the back to Airdrie.”

All of the competitors qualify for the national tournament, which will be held in Winnipeg during the Labour Day long weekend in September.

Belyk also won the 2010 John Miazdyk Award, an annual award voted on by his arm wrestling peers. Miazdyk, who was from Spruce Grove, started the World Arm Wrestling Championships in 1979.

“We just wanted to remember him on an annual basis, both provincially and nationally,” Belyk said. “It’s a prestigious award to get because of the man he was and how he organized the sport. It’s gratifying to have that.”

Belyk was especially satisfied with his tournament win, after beating Gary McDonald in the final, because Belyk almost didn’t enter, due to his organizational commitments.

“In the first round, he beat me on elbow fouls, so I had to come from the B side and beat him twice,” Belyk said. “I’ve never beaten him before, so that was a little icing on the cake.”

The CLAWS typically have downtime through the summer months, but Belyk said he will keep busy in order to be ready for Winnipeg and the shot at another World Arm Wrestling tournament.

“I’ll be in the gym a lot and doing my specific exercises,” he said.