It may have taken 12 years, but the Airdrie Storm finally has its first playoff victory in Calgary Bantam Football Association play.
Nov 5, 2010 12:00 AM By: Airdrie Today Staff 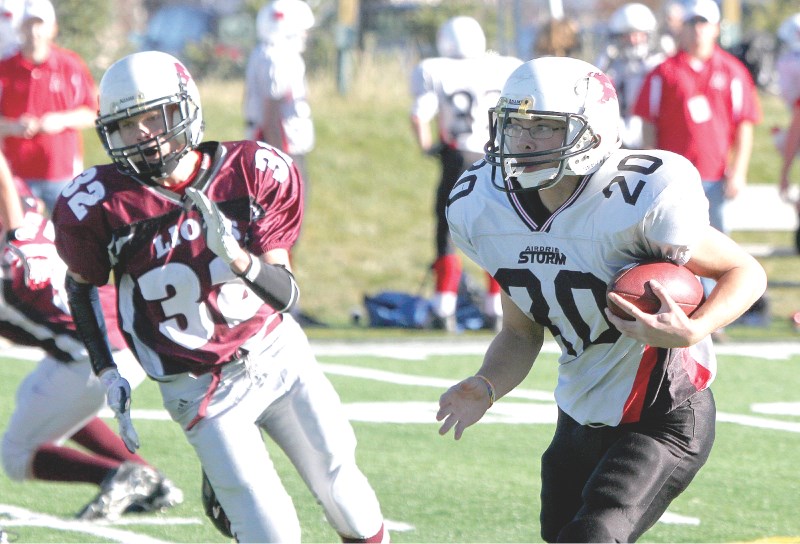 It may have taken 12 years, but the Airdrie Storm finally has its first playoff victory in Calgary Bantam Football Association play.

Josh Duazo had five rushing touchdowns to lead the Storm in its 42-3 win over the Cochrane Lions during the second round of CBFA playoffs at Shouldice Park on Oct. 30.

“When I get the ball, my mind opens and I just go,” Duazo said.

“I see green field and then I just run to it. With all of our execution, it just makes a lot easier for the offence to score.”

“His vision is amazing and he’s got a bunch of intangibles you can’t coach.”

“The kid is like butter, as he slips through everything,” said Lions’ head coach Pat Coyle.

“Our defence was on the field for too much of the game and you could see the wear down on those guys. Our inconsistency to punch the ball into the endzone was one of our biggest drawbacks. It was a young team and hopefully they experienced something here.”

Airdrie built up a 26-0 halftime lead before Cochrane got its lone score of the game with a 20-yard field goal with 4:02 left in the third quarter. On the Storm’s next drive, running back Nathaniel Cross appeared to be stopped for a loss of yards, but managed to break free and ran for a 70-yard touchdown to put Airdrie up 34-3.

“I had to get out of the back field, but after I got that, my wide receivers blocked for me and I was able to get down the field,” Cross said.

“This is the first time a (Bantam) Storm team has gone to City’s (Championships), so we’re hoping to win it and keep going to Provincials.”

An anomaly in the CBFA playoff schedule provided the Storm with a first round bye and an extra week to rest and prepare for the Lions.

“It gave us a good chance to gameplan, sit down with the coaches and watch a bunch of film and we had a lot of injuries that we got cleared up with the extra week off,” Kemp said.

“It helped us big time. Sometimes it can be a downfall, but it worked out for us.”

Duazo scored again with 3:30 remaining in the fourth quarter to secure the victory and move the Storm into the Division 3 Championship game against the Calgary Colts on Nov. 6.