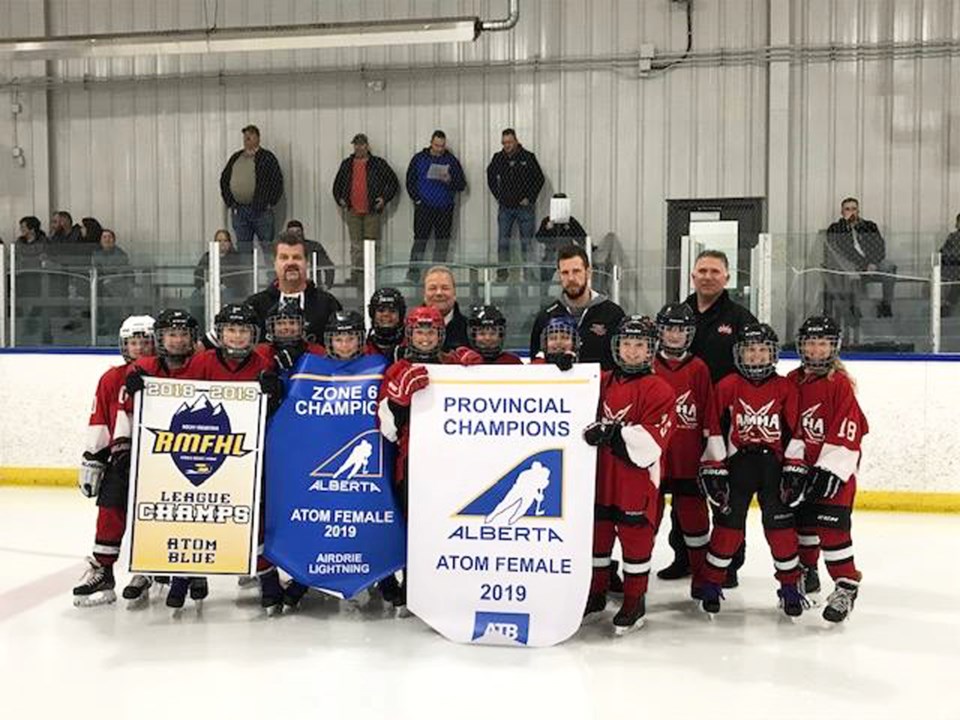 A competitive atom girls’ hockey team in Airdrie proved its dominance on the ice continually throughout the recent season, finishing the 2018-19 campaign with three shiny new banners to hang from the Ron Ebbesen Arena rafters.

The Airdrie Atom Blue Lightning showed its strength by going unbeaten (18-0-0) in the top atom girls division of the Rocky Mountain Female Hockey League (RMFHL). Following the successful regular season, the team claimed the Zone 6 banner before capping off the year by winning the atom girls’ provincial championship March 17 in Medicine Hat, Alta.

“The girls were undefeated in the regular season and they were 42-5-0 throughout the whole season,” said head coach Andy Coates. “We only lost one game [after] the end of November.”

According to Coates, the experience of the squad – all but three of the Lightning’s players were in their second year of atom hockey – paid dividends. He said the team’s biggest strengths were its unity and depth.

“The girls played for each other,” he said. “They were strong and had a good foundation built from the year before. They didn’t have much of an individualistic drive.”

Sharpshooters for the Lightning included Coates’ daughter Chelsea, who recorded 48 goals and 66 points during the regular season, as well as Sara Gerdel, who managed 20 goals and 53 points. The two continued to lead in scoring during the post-season, with Chelsea taking 12 points and Gerdel grabbing 11.

Other players who contributed plenty of offensive power were Norah Stevenson and Ever Ruurda, who each collected 25 points during the regular season.

Coates said he “had a blast” coaching at the atom level, which is comprised of nine- and 10-year-olds.

“I have four daughters of my own, so adding 15 more in the dressing room was pretty cool,” he said. “I find coaching girls at this age, they listen well and do everything they can to play as one. They’re really coachable.”

Most of the team will move on to the peewee age group next year. Coates said many of the Lightning will likely play on the same team, but due to the growing number of players, there could be more than one team for that age group.

“The female program [in Airdrie] has developed a fair bit of recognition, and I think there will be enough girls for two teams next year in peewee,” he said. “I’m not sure if they’re tiered or how it will work, but there should be enough for two clubs.”

While the season is over, Coates said many of the players on the Lightning will play spring hockey together, or other sports like lacrosse or soccer. He added at least eight players from the team competed at the Alberta Cup Challenge event in Edmonton, April 26 and 27.