Provincials and promotion – those are the two words on the minds of every player on the Airdrie United 1 men’s soccer team.
Jan 31, 2019 12:01 AM By: Scott Strasser 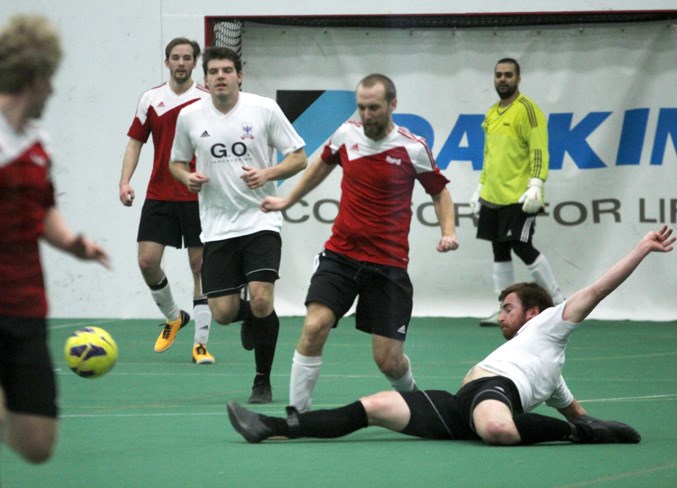 Provincials and promotion – those are the two words on the minds of every player on the Airdrie United 1 men’s soccer team. Eleven games into the 2018-19 indoor season, Airdrie United 1 boasts the top spot in Division 3A of the Calgary United Soccer Association (CUSA), with an 8-3-0 record. The team’s only defeats were a 3-2 loss against the South West United Relics Nov. 21, 2018, a 2-1 setback against the Chinooks Chipolopolo, Dec. 4, 2018, and, most recently, a 4-2 loss against Rogue, Jan. 25. "It shows that if you don't play your game, anyone can win in this league," said midfielder Phil Austin following the team's loss against Rogue. "We've played three bad games and lost three times. We've had eight good games and we've won eight times. "We just have to play our game, and the wins will happen." Airdrie United 1 has been on a roll for most of the season, including a five-game winning streak during the last two months. The team is showing it has the potential of topping the division this year, according to coach Tyler Grandan. “The morale has been good, even when we’ve been tied or behind, and even in our losses,” he said. “We know what we have to adjust and we shift accordingly.” While Airdrie United 1 struggled to field a full roster in previous years,  Austin said commitment from players has been much better this season. “It’s the same 12 to 13 guys showing up to each game, so we’ve been able to mesh really well,” he said. “There aren’t really a lot of new faces, but we have had a couple new guys join the team, with people moving away to other countries and things like that, but for the most part, it’s just that commitment level.” After a disappointing 2017-18 indoor campaign, this season is about redemption. Airdrie United 1 was ousted from Division 2 of CUSA last year based on a ninth-place finish. The team’s ambition this season has been to finish atop Division 3A, which would result in the squad gaining promotion back to the second division next year. Finishing first would also qualify Airdrie for the men’s Division 3 provincial championships, which are set to take place in Edmonton March 22 to 24. “We’re still on track, and we’ve had a couple of big games that really put out a statement of what our intent is,” Grandan said. “We’ve had a full commitment and the development of the team has been [great]. They all trust each other, understand their jobs and shift as needed, depending on the team we’re facing.” Airdrie’s most recent fixture took place Jan. 25 against Rogue. While Airdrie went into the contest on a five-game winning streak, the team faltered, coughing up a 2-1 lead at halftime to lose 4-2. "Everyone was tired in their own way, whether it was physical, mental or for whatever reason," Austin said of the second-half collapse. "We really don't have an excuse for it. For whatever reason, we just didn't seem to want it as much." The squad’s next game will be Feb. 2 at the Calgary South Soccer Centre against fifth-place South West United Relics. Airdrie will be seeking redemption against the mid-table side, after losing to the Relics earlier this season.