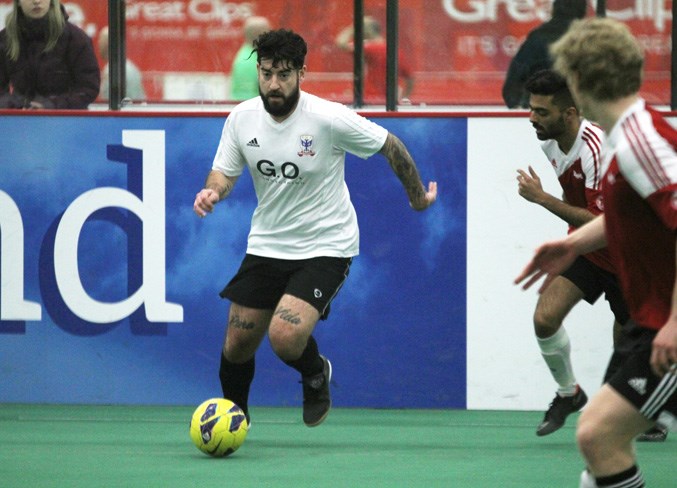 Mauricio Rosas carries the ball for Airdrie United 1, during a regular-season match earlier this year.

It’s mission accomplished for Airdrie United 1, after the men’s indoor soccer team completed its goal of topping Division 3A in the Calgary United Soccer Association’s (CUSA) 2018-19 indoor league. Winning Div. 3A means the Airdrie team will re-gain promotion to the second division next winter. United 1 was ousted from the higher tier last indoor season, due to a disappointing ninth-place finish. “The game that we clinched the division in, I told the guys, this is the only thing standing in our way,” said Tyler Grandan, the team’s head coach. “Right after the game, they were overjoyed and ecstatic.” Airdrie won the division March 2 with a 6-1 dismantling of the EMFC Blue Devils. Grandan said the game – Airdrie’s fifth consecutive win – was one of team’s strongest performances of the season. “We came through and demonstrated we were a solid team that does the basics consistently,” he said. United 1 concluded its season with a 3-1 loss to Lads Club 1 March 6, and a 4-2 win March 12 over MAC United. Even though the regular season is over, there’s still some footy left to play. The first-place finish in the Calgary league qualified Airdrie United 1 to compete at the Division 3 men’s provincial championships. The tournament will be held March 22 to 24 in Edmonton. “We’re excited to go and see what comes out of it,” Grandan said. “Now, our next goal is to be a contender [at provincials] and see what the teams from other cities are like.” Airdrie ended its regular season schedule with a 14-4-0 record. The campaign ended on a high note, including the five-game win-streak between Jan. 30 and March 2. During those matches, Airdrie scored 24 goals and conceded just six. “The guys were getting scoring from every player on the team and everyone was doing their job, which allowed everyone to raise their game to another level,” Grandan said. Following the provincial tournament, the players will take a short break before preparations begin for the 2019 outdoor season, according to Grandan, with tryouts set for mid- to late-April. Airdrie United 1 will compete in CUSA’s Division 2 this summer. Airdrie United Football Club will also field a squad in Division 5, as well as teams in Calgary's over-35 and over-45 leagues. “We’ll probably be looking for a field as soon as the snow clears off,” Grandan said. “As soon as we get the weather, we’re going out there.”

While the men’s indoor soccer league has wrapped up regular-season competition, Airdrie’s top women’s soccer team – the Airdrie United Aztecs – still has one more fixture left to play. Competing in the Calgary Women’s Soccer Association’s eight-vs.-eight league, the Aztecs currently sit second in Division 4, with a 9-2-2 record. The team's last outing was a 3-1 win March 17 over the Chestermere United Excelsior. Airdrie's final match of the regular season will take place March 31 against About To Get Messi. Kick-off is scheduled for 7 p.m. at Foothills Soccer Club’s indoor field house in southeast Calgary.