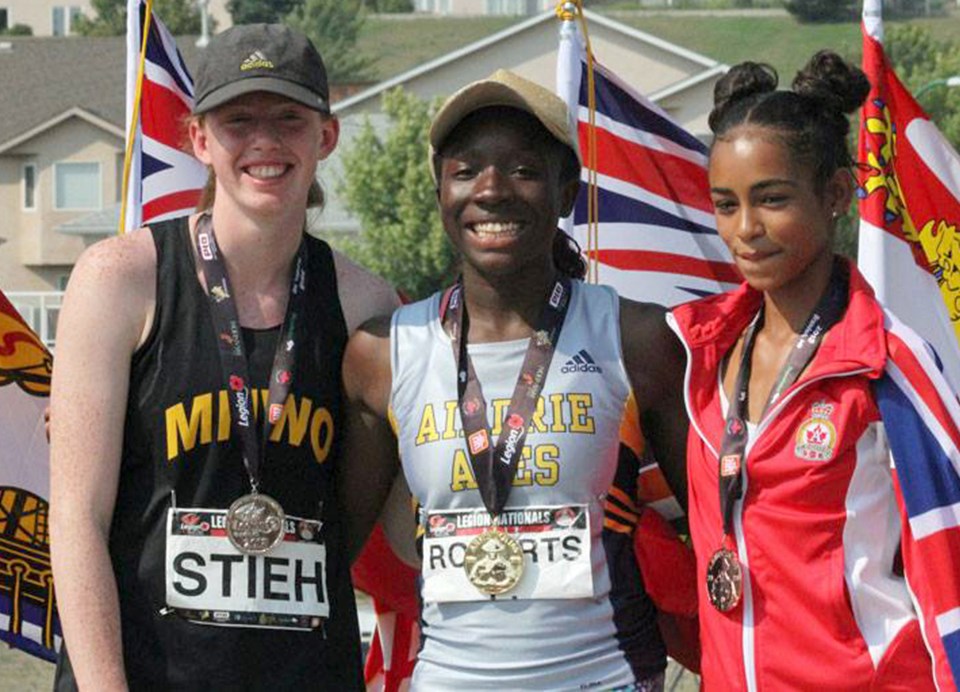 Airdrie sprinter Princess Roberts (center) won gold in the 400-metre (m) and silver in the 200-m sprint at the 2018 National Youth Track and Field Championships.

Airdrie’s athletes faced not only their opponents, but also the elements at the 2018 National Youth Track and Field Championships, held in Brandon, Man., Aug. 10 to 12. The young track-and-field stars battled near 40 C heat, high humidity and poor air quality to take home a few medals and personal bests (PBs) from the meet. “The conditions affected everybody,” said Airdrie Aces coach Jodie Matsuba-Szucs. “I think all the athletes were affected by the heat in at least one event. “With the heat like that, we’d tell the kids to stay indoors, in the arena, and come out with just enough time to warm up and get ready for their races, because it just sucked the life out of you.” Despite the adverse weather, sprinter Princess Roberts became Canada’s queen in the U18 womens’ 400-metre (m) dash, with a PB of 56.18 seconds to take home the gold. But the 17-year-old was less excited about her silver medal in the 200-m, for which she is ranked first in Canada for the U18 age group. Racing against a strong headwind, Roberts ran the 200-m in 25.18 seconds, which is more than a second off her best time. Thrower Jinaye Shomachuk also beat the heat to record two gold medals at nationals. While her throw was about four metres from her farthest distance, Shomachuk still threw 48.33 m in the U16 womens’ hammer throw to win the event. She earned her other gold medal in the discus throw with a distance of 39.27 m, beating the Alberta record for her age group. Shomachuk concluded her national youth championships with a fifth-place finish in the shot put. “She should have easily won that – she usually throws 12 and a half, but she was having some health problems,” Matsuba-Szucs said. “But she still finished top five on a bad day.” Short-distance runner and hurdler Sarah Zinck also reached the podium for Airdrie, picking up the silver medal in the 200-m hurdles with a time of 29.01 seconds – 0.03 seconds faster than the third-place finisher. Other Airdronians who competed at nationals included Kashay Kelsick, Aiden Good, Parker Allen, Jalen Greenidge, Peter Roberts, Nic Wroe, Rudy Buchanan and Jasmine Szucs. Kelsick cracked the top five in the 200-m hurdles for his age group, while Greenidge finished just outside the podium in the long jump. He placed fourth with a distance of 6.58 m. Good ran his third sub-two-minute 800-m race of the summer, with a time of 1:59.99, to finish in the top 16. Buchanan placed ninth in the 400-m hurdles, finishing his race in 61 seconds flat.