The Airdrie Thunder lost for the first time this season, Nov. 6, but it was the loss of leading scorer Andrew Bergmann earlier in the week that was drawing more attention.
Nov 9, 2010 12:00 AM By: Airdrie Today Staff 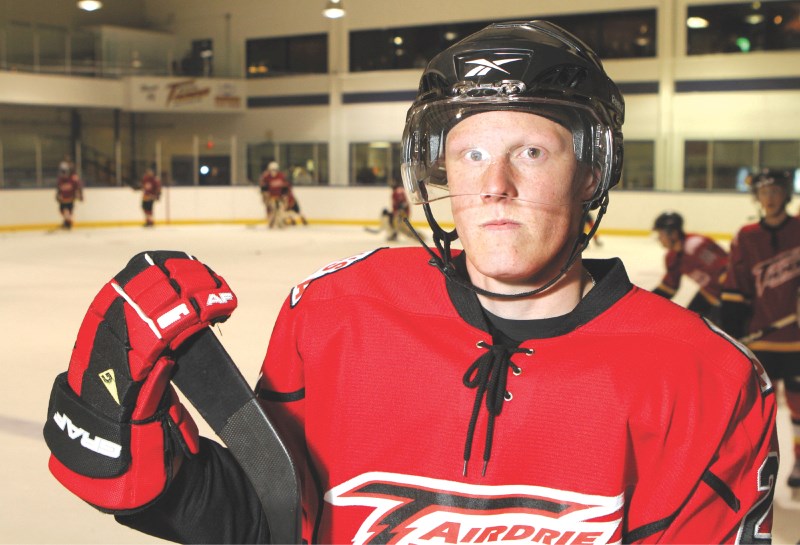 After an amazing start to the season, Andrew Bergmann left the Airdrie Thunder to play Junior A with the Waywayseecappo Wolverines of Manitoba.

The Airdrie Thunder lost for the first time this season, Nov. 6, but it was the loss of leading scorer Andrew Bergmann earlier in the week that was drawing more attention.

Bergmann, who had 22 points in nine games with the Thunder, opted to leave the Junior B team for an opportunity with the Waywayseecappo Wolverines of the Manitoba Junior Hockey League.

He stepped into their lineup with a goal and two assists in his first two games, a 6-5 loss to the league-leading Selkirk Steelers and a 5-3 loss to the Winkler Flyers.

“The team was good in Airdrie, but I wanted to move on and play Junior A this year,” Bergmann said. “It was a pretty personal decision. I just wanted to further my career and go as far as I can. Hopefully I can keep putting up points like I was in Airdrie and maybe we’ll start winning some games.”

“He’s a tremendous talent, only 18 years old with a desire to play Junior A and had the opportunity, so we’re going to allow him to do that,” said Thunder head coach Darryl Einarson. “We wish him all the best.”

The Thunder split a weekend series with the Red Deer Vipers, losing 6-3 on the road, Nov. 6, after scoring six third-period goals in a comeback 8-6 win at the Ron Ebbesen Arena on Nov. 5.

Alex Hustad had all three goals in Red Deer, while he also scored a hat trick, including the game winner, in Friday night’s game. He now leads the Heritage Junior Hockey League in scoring with 27 points.

“It was a tight game and a tremendous comeback on our part,” Einarson said. “I was really proud of our guys, as they just didn’t quit. Gardiner held us in and gave us a chance to win. To comeback against a great team like Red Deer was a great win. The next night it just wasn’t going our way and it was tough in their barn. It’s one of those games were you file it, learn something from it and move on.”

The Thunder was missing its entire top line for most of the weekend, with Alex Diduch away on holiday, Bergmann’s departure and an injury to Wallan during the first period of Friday’s game.

“(Wallan) could have gone if it was a playoff game, but we felt he should rest. We do miss him (Diduch) a lot, as he adds quite a bit of feistiness to our lineup and scoring as well,” Einarson said. “But it shows our depth. Guys like Rockafellow, and obviously Hustad, are playing great every single night. (Brandon) Esposito jumped in the lineup, played really well too and we’re happy to have him back.”

The Cochrane Generals improved to 9W-0L on the season with a 4-2 win over the Medicine Hat Cubs at home Nov. 6, after posing a 5-4 overtime win over the Thrashers in Three Hills on Nov. 5.

Cochrane is now the last unbeaten team in the HJHL this season.

Captain Danny McSween, second in league scoring with 25 points, had two goals against the Cubs and scored the overtime winner against Three Hills. Mike Matlo added two against the Thrashers and one on the Cubs, while Jonny Pictin had one in each game.

Garrett Fraser earned the Medicine Hat win in net, while Brendon Satchwell was the netminder in the win over Three Hills.

Cochrane will host the Strathmore Wheatland kings, Nov. 12 at 7:30 p.m. at the SLS Family Centre, before visiting the Blackfalds Ford Wranglers, Nov. 14.