While many of Airdrie’s athletes haven’t been able to play their sport of choice in recent weeks, coaches are finding creative ways to help athletes continue their development during the difficult time.
Dec 25, 2020 1:00 PM By: Jordan Stricker 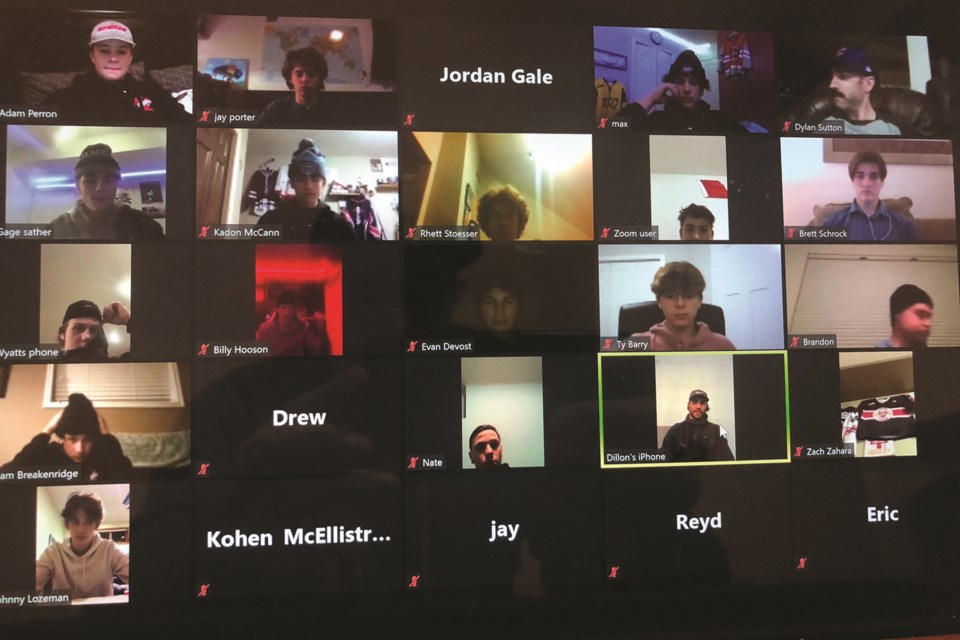 The Airdrie Xtreme U15 AAA hockey team has held online information sessions during the pandemic to promote personal growth for players. Dillon Dube was one of the many guests that have spoken to the players. Photo Submitted/For Airdrie City View

While many of Airdrie’s athletes haven’t played their sport of choice in recent weeks, coaches are finding creative ways to help athletes continue their development while pandemic-caused restrictions keep them from the game.

The Airdrie Xtreme U15 AAA boys’ hockey team has been utilizing Zoom to hold information sessions.

“We can’t be on the ice, so we wanted to bring in some guest speakers who could bring some different insights to the players,” said head coach Tyson Soloski. “Hopefully, they can take one or two things from each speaker and apply that to training, their mental game or taking things to the next level of hockey.”

CEO of Global Sports Mark Maloney, general manager of the Calgary Hitmen Jeff Chynoweth and Calgary Flames player Dillon Dube – an Xtreme alumnus – are just a few of the people who stopped by to leave the players words of encouragement. Soloski said eight guest speakers have joined in on what staff have called the Xtreme Speaker Series.

“The kids love them,” he said. “It’s nice to take your mind off of everything going on in the world right now. I know they have taken a lot out of them.”

The Xtreme was among the many sports teams impacted by the cancellation of team sports and group activities announced in November. Since then, Soloski said having the opportunity to gather virtually a few times a week has maintained a familial atmosphere for the group.

“They have all talked about some amazing stuff,” he said. “What I found really cool was them speaking to my team about their past experiences in hockey and how they got to where they are now."

McLaughlin added the speakers have hammered home the idea of working hard to get better every day, "whether it’s in school, in the hockey rink or in the gym, we have to be fully committed.”

He said another important piece he's learned from the sessions is to look for areas of improvement, not just in hockey but everywhere in life.

“Whether that is in math class or working on my shot there is always something to work on,” he said. “Also, learning to accept adversity when it comes your way. We have learned to use it as motivation to push ourselves every day.”

From the ice to the pool, the Nose Creek Swim Association is also taking its training online. Coach Alexx Diep has been offering similar online sessions for the swimmers involved with the Airdrie-based club.

“At first, we just met with the kids online a few times a week to keep them engaged and check in with them,” he said. “That slowly evolved as we realized the time away would last longer. We delivered a lot of online training. We also had a few key people in the swimming world visit us on Zoom.”

Sessions included a former Olympic swimmer delivering a speech on resiliency and the importance of adapting, while another Olympian spoke about his journey to the Games.

“The kids were really absorbing everything they were saying,” Diep said. “The swimmers realized that even in times of no COVID-19, these people faced a lot of challenges.”

Diep said from his perspective, coaching has been difficult during the pandemic in terms of keeping motivated and coming up with fresh ideas to assist that.

“Right now, I am personally going through a bit of a slump in terms of motivation and personal coaching mental health,” he said. “I am doing different things to keep moving.

“It’s not easy. I am hoping that being sincere will allow the athletes to also be sincere and come out with comments about their mental health.”