Three young members of the Airdrie Skating Club (ASC) had the chance to represent their city and club at Skate Canada’s 2018 figure skating Sectional Championships. The event was held Oct. 31 to Nov. 4 in Red Deer, Alta.
0
Nov 15, 2018 12:01 AM By: Scott Strasser 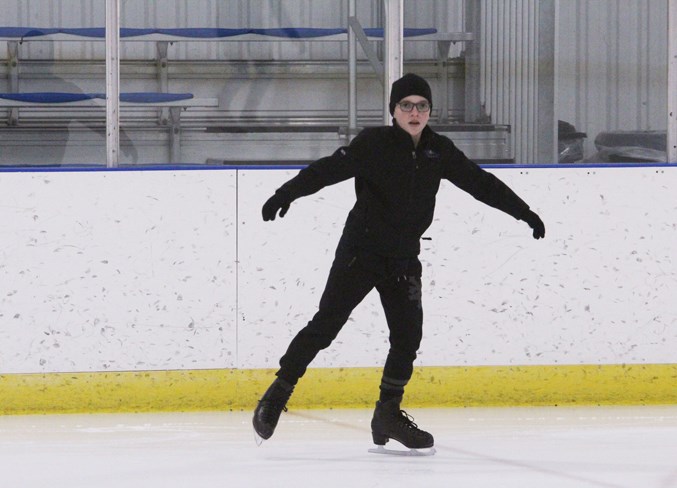 Twelve-year-old Benjamin Vatcher was one of three Airdrie skaters that competed at Sectionals in Red Deer Oct. 31 to Nov. 4.

Three young members of the Airdrie Skating Club (ASC) had the chance to represent their city and club at Skate Canada’s 2018 figure skating Sectional Championships. The event was held Oct. 31 to Nov. 4 in Red Deer, Alta., and featured the top young skaters from Alberta, Yukon and the Northwest Territories.  Ten-year-old Jaden Kasper and 12-year-olds Benjamin Vatcher and Heather Nunn all scored personal bests, according to ASC coach Chalsie Doiron. Sectionals identifies the top skaters in each province for advancement to higher rounds of competition, according to Doiron, ultimately leading to the Canadian Figure Skating Championships. For many young athletes, she said, the event acts as their first exposure to competitive-stream competition.  “The way it’s done is similar to the way a competition would be done at a higher, national level,” Doiron said. “It’s a great way for skaters at this age to see where they are at against all the other competitors.” Kasper competed in the pre-juvenile category (U11) for single skaters and placed 17th, with a score of 20.71 points. She said she was pleased with her performance and added she felt confident heading into the competition.  “At most competitions, I usually feel really, really nervous, but this time, I wasn’t nervous,” said Kasper, who has been figure skating for three years.  “I think not being nervous at such a big competition like that [means] I won’t be as nervous at smaller ones.” Doiron said Kasper’s performance in Red Deer moved her up eight spots in the Alberta section’s Leading Edge Series for the pre-juvenile age group. The series ranks youth figure skaters based on the points they score at each competition.  “From the last competition to this competition, she went from 34th to 26th place, out of 49 skaters,” Doiron said.  Nunn and Vatcher competed as an ice-dance team. While the two 12-year-olds each have a few years of experience as single skaters, they only started practising as a pair last summer, according to Doiron. “They’re still so very new to it. It was their first competition together as a team,” she said. “They spent three months just completely working on everything and spending four or five days a week on this.” There were only two other dance pairs in the pre-juvenile age group for ice dance, and the Airdronians placed second.  “Overall, it was a great first experience for them in this part of the competition,” Doiron said.  Vatcher said competing at Sectionals taught him the importance of persistence. “If falling happens, it doesn’t matter – just get right back up,” he said.  Now that Sectionals is over, Doiron said, the ASC’s next big competition will be the Calgary Region STARSkate Invitational, Dec. 7 to 9 in Okotoks.