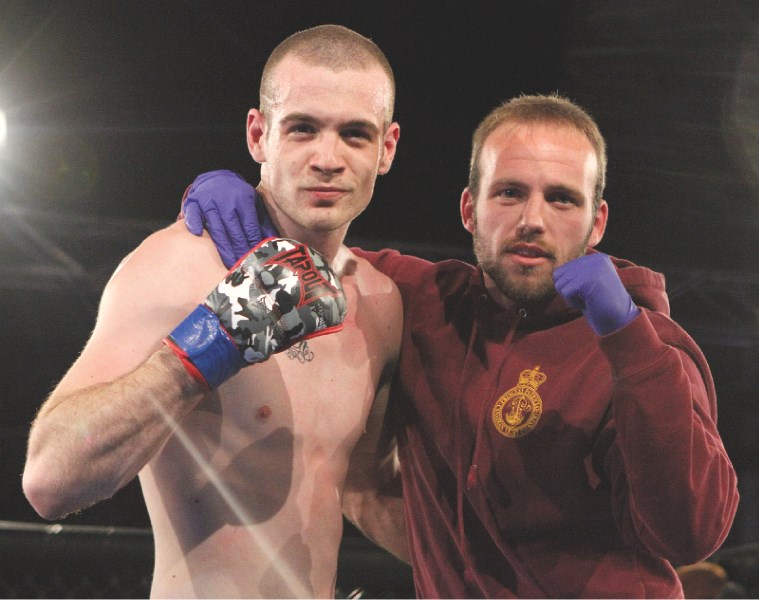 Airdrie fighter Adam Lacasse (left) and teammate Gareth Jones pose for a photo after the unanimous judges decision in Lacasse&#8217; favour during School of Hard Knocks 7, June 5 at the Silver Dollar Casino in Calgary.

Lacasse, who trains out of the Primal MMA camp in Airdrie, has a Muay Thai background, but showed his grappling skills in the fight.

La took the fight, his MMA debut, on short notice after the original opponent had to drop out, so Lacasse decided to try and control where the fight was fought.

“My gameplan was to keep it standing, it’s something I am comfortable with,” said Lacasse.

La caught Lacasse with a kick early in the first round, prompting the Calgary fighter’s corner to call for more kicks, but that gave Lacasse the opportunity to take the fight to the ground.

“He caught me with a kick the first time, then his corner was yelling to kick again,” said Lacasse.

“I knew the kick was going to come at me lazy, so I caught the kick.”

Lacasse showed great grappling skills, continually moving towards the dominant position, and even sinking in a guillotine choke at the end of the first round. But it was a spinning backfist that appeared to hurt La.

“I hit him with it and I stepped back to make sure he wasn’t going to counter,” said Lacasse. “I should’ve followed up and finished it there.”

During the second round, which was fought mainly on the ground, Lacasse was able to put La into a variety of different submission holds, none of which were able to damage his opponent.

La was able to maneuvre into the dominant position a couple times, none of which worried Lacasse, as no submission attempts were ever tried by La during the match

The win is Lacasse’s first victory in three attempts in the Hard Knocks Fighting organization.

Lacasse’s teammate, Jamie Guminy, who was the only Airdrie fighter on the professional side of the card, also lost his fight by decision, after being dominated on the ground by Red Deer’s Brent Keryluke.

Lacasse says he feels the Primal MMA camp out of Airdrie, which is the combination of Gareth Jones, Lacasse and Guminy, is the strongest in the region because of what each fighter brings to the table.

“We are not like a gym; they take your money and they train what they want with you,” said Lacasse.

“We each have different strengths, so we are able to crossover. It’s a real family mentality there.”

With his first win notched, Lacasse hopes to get on the Hard Knocks 8 card in September and improve his 1W-1L-1T record.

“Hard Knocks is good to all of us,” he said.

“It is a great organization, and it’s in our backyard. I will continue to fight with Hard Knocks.”