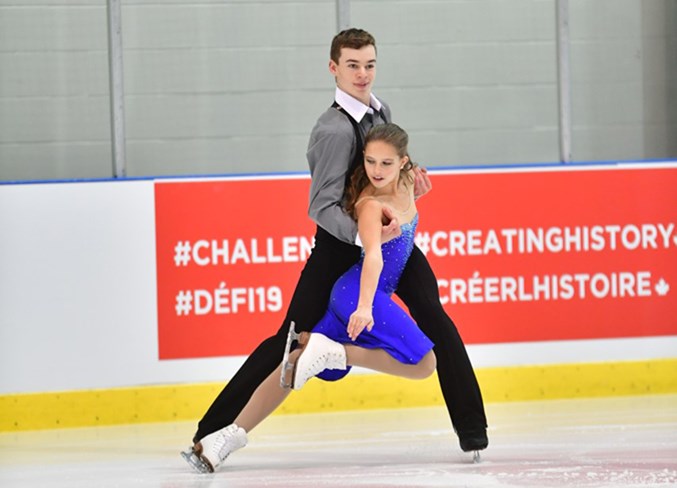 Airdrie figure skater Savanna Martel will compete in the Ice Dance competition alongside Cobi Chant at the 2019 Canada Winter Games Feb. 15 to March 2 in Red Deer.

Four athletes from Airdrie will be among the 250 competitors representing Alberta at the 2019 Canada Winter Games in Red Deer Feb. 15 to March 2. Thomas Hulsman, Savanna Martel, Keagan Slaney and Teyana Roberts will compete at the biggest multi-sport competition to be held in Alberta since the 1988 Winter Olympics in Calgary. Hulsman will be Airdrie’s oldest representative at 19 years old and the W.H. Croxford graduate will compete in the biathlon event. “I am super excited,” said Hulsman, who moved to Canmore following high school to train full time at the Biathlon Alberta training centre. “It’s a good group of people from across Canada that are going to be there racing, so it’s going to be a lot of fun.” While this will be his first Canada Winter Games, Hulsman is familiar with high-level competition – he’s won multiple medals since 2015 at the Canadian National Biathlon Championships, and has twice competed in Europe at the Biathlon Youth and Junior World Championships. Hulsman said he became involved in biathlon in 2010, after watching the sport on TV during the Winter Olympic Games in Vancouver. “You have to go out and ski, so your heart rate gets very high, and you’re doing an endurance sport,” he said. “Then, all of a sudden, you’re asked to stop all that, and calm yourself down to shoot at some metal plates. That’s a challenge in itself.” Thirteen-year-old Martel will also be competing for the first time as she vies for a medal in Ice Dance alongside her skating partner, Olds resident Cobi Chant. “I’m really excited to be honouring Alberta for the Canada Winter Games, because it’s a once-in-a-lifetime opportunity, and not many people are able to [do it],” said the Grade-8 Muriel Clayton Middle School student. Despite only skating together for a year, Martel and Chant are ranked third in Canada for their age group, after earning the bronze medal at the 2019 Skate Canada Challenge. Prior to that, the pair earned a silver medal at the Skate Alberta Sectional Championships in 2018. “We know each other a lot better than we did at the beginning and we’re good friends now,” Martel said, adding her goal in figure skating is to compete at the 2026 Olympics. Martell has been skating since she was six. While she used to compete as a member of the Airdrie Skating Club, she now laces her skates for the Calalta Figure Skating Club, in Calgary. Going from ice to the mat, Airdrie martial artist Roberts is turning heads in the Canadian Judo scene. The 15-year-old Bert Church High School student will enter the Canada Winter Games on a high, after topping the podium Jan. 13 in Montreal, Que., at the Canada Elite 8 National Championships for the 63-kilogram weight class, in the U18 age category. She also won gold in judo at the 2018 Alberta Winter Games. “I feel really proud of myself for making it [to the Canada Winter Games] and nervous to compete,” Roberts said. “I’ve just been training every week, like I have been, and trying to train harder for the Games.” Though she is still relatively new to judo, Roberts previously trained in jiu-jitsu for more than three years. The fourth athlete from Airdrie who will compete at the Games is Slaney, a 15-year-old hockey player who will don the Team Alberta sweater. “It’s amazing. I’ve been dreaming about it for a long time, ever since I knew what the tournament was,” Slaney told the Airdrie City View in a December 2018 interview. Another Airdrie hockey player who will compete alongside Slaney is his Mountaineers teammate Craig Armstrong. While Armstrong is from Beiseker, he’s called Airdrie home for many years.