Airdrie athletes Savanna Martel and Teyana Roberts proved they can compete with the country’s best during Week 2 of the Canada Winter Games, held Feb. 24 to March 3 in Red Deer.
0
Mar 7, 2019 12:01 AM By: Scott Strasser 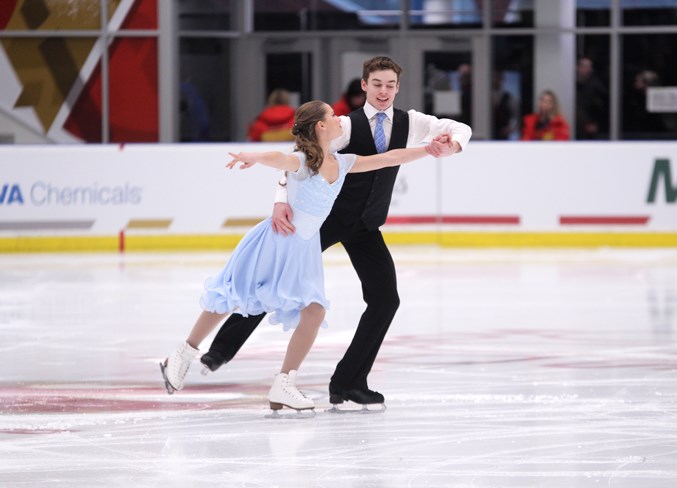 Airdrie athletes Savanna Martel and Teyana Roberts proved they can compete with the country’s best during Week 2 of the Canada Winter Games, held Feb. 24 to March 3 in Red Deer. Martel, a 13-year-old figure skater, concluded her competition with the bronze medal in the pre-novice ice dance Feb. 27. “We were quite pleased,” said Martel, who was skating alongside her ice-dance partner Kobi Chant, of Olds. “It could have gone a little better, but it was definitely a good skate and we really enjoyed it.” Martel and Chant had entered the final round of their competition in first place after performing well during the pattern dance. Unfortunately, they were not able to hold onto the lead following the free dance portion, after registering a 49.89-point score. “It could have been because of the level of our lift, or the twizzles,” Martel said. “Those are two harder elements. Other than that, it was a good program and coming third is really good.” While finishing the week on the podium was an obvious highlight, Martel said other aspects of the Canada Winter Games were equally enjoyable. “I also really enjoyed being able to be there with athletes from other sports, being able to watch all these other sports and people and be able to meet all these athletes from all over Canada,” she said. Now that the Canada Winter Games has wrapped up, Martel said, the pair’s 2018-19 season is officially over. She said she and Chant will not rest for long however, as they will soon start preparing for the first figure skating competition of the 2019-20 season – the Wildrose Invitational, which will take place in Leduc in July.

Competing at her first Canada Winter Games, 15-year-old judo athlete Teyana Roberts showed she is not phased by older competition, earning two medals in Red Deer. Roberts kicked off her tournament with the bronze Feb. 27 in the women’s 63-kilogram (kg) individual competition. “Standing on the podium, I felt accomplished,” she said. Despite losing her first match Feb. 27 to British Columbia’s Isabelle Harris, Roberts was able to rally back to win her Repechage A and B bouts, before overcoming Alberta teammate Greta Goasdoue-Wallace in the bronze-medal match. “[My coaches] told me that I put my [first] opponent on too much of a pedestal, and that made me fight not as strong as I could have, because she was older than me,” Roberts said. Two days after claiming the bronze, Roberts was a member of the Alberta team that finished first in the women’s team judo competition, with wins over Prince Edward Island, Ontario and B.C. “I won a couple of my matches pretty quick,” Roberts said. “I was proud of that. It didn’t go into golden scores and it wasn’t a close match – I just beat them right away.” Roberts’ and Martel’s medal-winning performances during Week 2 ensured that all five Airdrie athletes competing at the Canada Winter Games made it onto the podium. During Week 1, biathlete Thomas Hulsman earned the silver in the men’s 3x7.5-kilometre relay, while Keagan Slaney and Craig Armstrong finished with the bronze as members of Alberta’s U16 men’s hockey team.