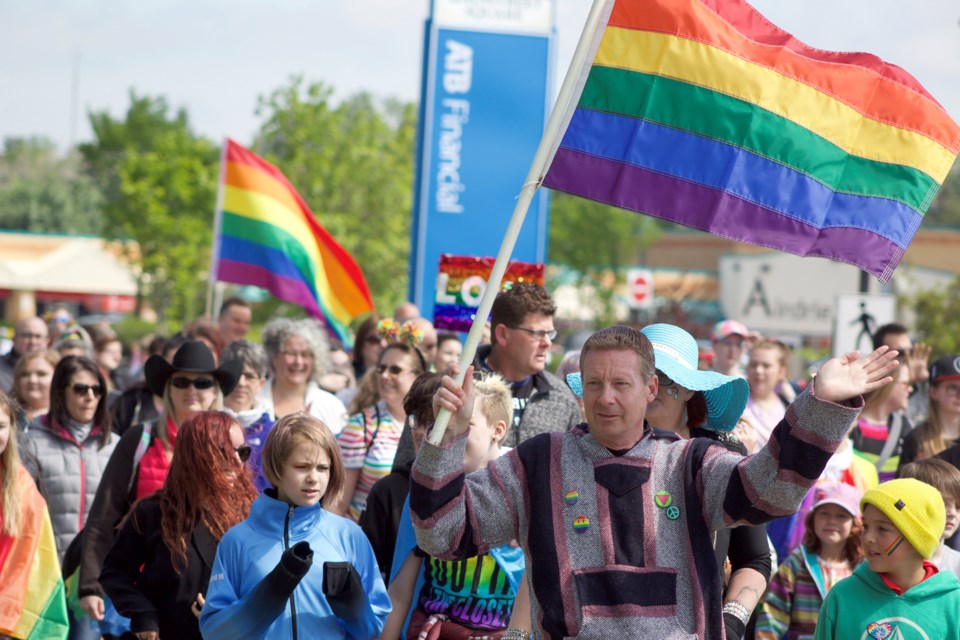 Airdrie's LGBTQ2S+ community – along with a large number of straight allies – participated in a solidarity walk June 22, at the city's first-ever Pride event. On July 2, City council refused a request from a straight pride group to fly a flag at City Hall in August. File Photo/Rocky View Publishing

Following close on the heels of Airdrie’s first-ever LGBTQ2S+ Pride Festival, City council has denied a request for a straight pride group to fly its flag at city hall.

“The flag that has been brought forward today…is working solely to exclude one section of our population,” said Coun. Tina Petrow during a council meeting July 2, “whereas the Pride flag does the exact opposite. It flies to symbolize equality between everyone, no matter what colour stripe you wear.”

Larry Boland, on behalf of It’s Great To Be Straight, had requested council’s endorsement to fly the group’s flag Aug. 12, claiming “straight people are an oppressed majority.” The date comes just weeks before a straight pride event planned in Boston, Mass., according to Boland, where he said organizers were also denied the opportunity, by the municipality, to fly their flag.

“Governments have spent millions of dollars of taxpayers’ money promoting and encouraging the LGBTQ2S+ community, and the straight people, nobody wants to listen to them,” Boland said. “Nobody appreciates their lifestyle, and nobody’s willing to do anything for them or to recognize them.”

According to Petrow, the group should be grateful there is no need for straight pride events or flags – that, as a straight female, “every day of my life is a straight pride day.” She added she’s never known a straight friend to have been beaten up, refused entry to a building or an event, denied job opportunities or been afraid to leave their home simply because of their sexuality.

But having a pride parade or recognizing a marginalized population, according to Boland, “doesn’t change what happens what the minority of people will do to any race or any group,” and said he doesn’t believe it has any impact on “the strength or safety of the LGBTQ2S+ community.”

While Boland was unable to provide details on how many members belong to the Airdrie chapter, he said it is “growing.” However, according to Coun. Al Jones, the group doesn’t appear to be registered in Alberta or in Canada.

Jones also noted the letter provided no evidence to support any claims of inequality ­– and said that, in fact, straight people made up the “majority” of the crowd at Nose Creek Park June 22, supporting Airdrie’s LGBTQ2S+ community at its inaugural event.

Council voted unanimously to receive the letter for correspondence – no motion was put forward for a potential approval. Boland said he is currently putting together a presentation to argue his case at a future meeting; however, council spoke strongly against the concept, indicating the group will likely encounter continued resistance.

“I’m not willing to entertain a request like this, or continue to discuss a topic that, in my mind, is designed to undermine and minimize the work that Airdrie Pride has done in our community,” Coun. Candice Kolson said. “This request is not progress.”