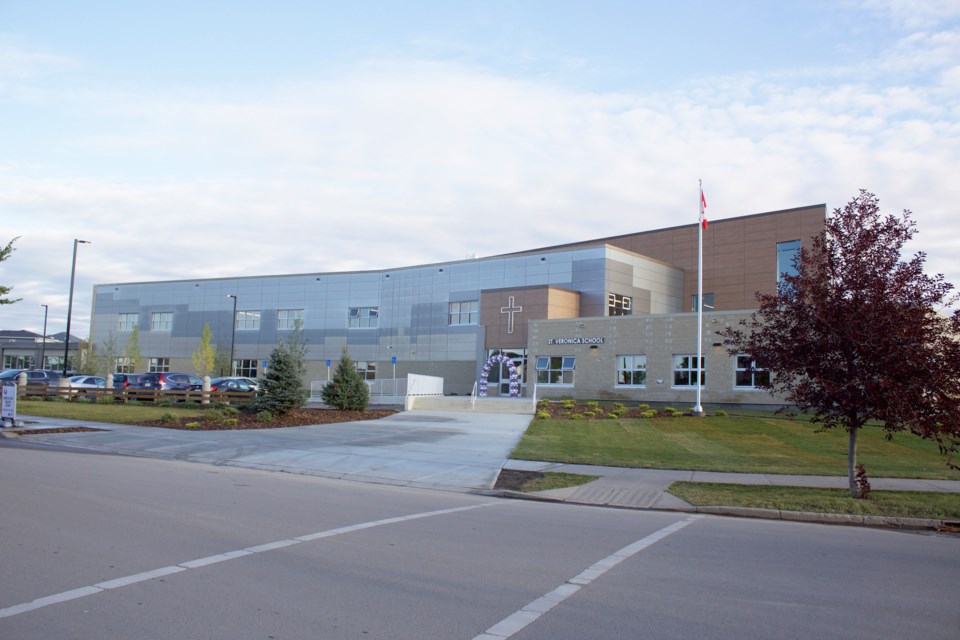 Principal Patrick Quinn said he was filled with excitement as the school welcomed its first cohort of students.

“You’re part of this process for the last six months or so...and you’re hoping it’s all going to work out, and it all works out,” he said. “It’s a feeling of joy, elation and excitement.” 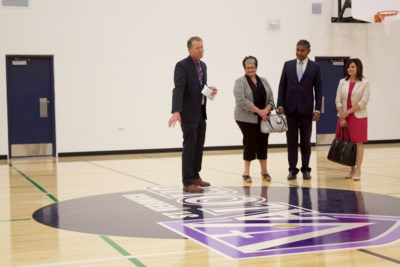 (From left) Principal Patrick Quinn shares the significance of St. Veronica School's team name, Valour, with school trustee Linda Wellman, Minister of Infrastructure Prasad Panda and Minister of Education Adriana LaGrange during a tour of the school Sept. 5. Photo by Ben Sherick/Rocky View Publishing
Ground was broken for the new facility in June 2018, Quinn said, and the school was originally scheduled to open September 2020. However, when it became apparent construction could be completed early, a push was made to have the building ready for this academic year.

“Through the summer, the construction guys [were] phenomenal,” he said. “They started working all day, every day – Saturday and Sunday included – from around early July, and they just never stopped.”Quinn led a tour of the school Sept. 5 that included parents, Calgary Catholic School District (CCSD) officials, the press, Minister of Education Adriana Lagrange, Minister of Infrastructure Prasad Panda and local MLAs Angela Pitt and Peter Guthrie.

The tour highlighted various architectural and design elements of the new building, such as the gymnasium, classrooms, learning commons and, Quinn’s personal highlight, a large window coated in blue and yellow film to simulate stained glass and capture the morning sun.

Some small elements have yet to be completed, Quinn noted – an elevator to the second floor was out of order, some signage needs to be installed, wooden guards in the stairwell will be replaced by glass, and basketball hoops and tarmac game spaces are not finished – but he added the work will be completed before the end of the year, if not by the end of September.

“It feels really awesome to be at a brand-new school, and be the oldest here,” Chadwick said.

Faubert added, while she’ll miss the teachers at Our Lady Queen of Peace School, she’s happy to be at the new facility. 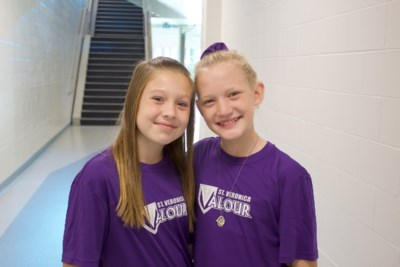 (From left) Grade 6 students Peyton Faubert and Brooklynn Chadwick said they are excited to attend St. Veronica School, where they will be students for the next two academic years. Photo by Ben Sherick/Rocky View Publishing
“We’re sad that we can’t go here for high school,” she said.

This year, the school comprises students from kindergarten to Grade 6, and will expand to Grade 7 next year as the oldest class ages. Quinn said around 370 students are currently enrolled, but capacity is 750.

“We’re anticipating we’ll get there shortly, in a few years,” he said.

CCSD Vice-Chair Linda Wellman – the trustee representing Airdrie – said she was thrilled by the building, but noted the new school highlights the need for additional education facilities in the city, as the community continues to face rapid growth and current students grow older.

“We have been busting at the seams for quite some time,” she said. “We’re absolutely delighted that we were actually able to open this school a year ahead of time, which is almost unheard of…but it also does add more pressure on us, as well. It’s going to put more pressure on us to ensure that our number one capital priority, which is the addition and modernization to St. Martin de Porres [High School], actually comes to fruition.”

For now, the St. Veronica’s community is happy to see the school open. Ryan Torris, a parent of a Grade 3 student, said he and his family felt grateful for the “positive environment for the kids to grow in.”

“It’s nice to have a convenient, brand-new school that offers the ideals that we have in our family,” he said.