The new Chinook Winds Skate Park is complete and now open to the public. However, the City wants to make it clear that the area immediately surrounding the park is a construction zone, which is closed to the public.
Jun 4, 2010 12:00 AM By: Airdrie Today Staff 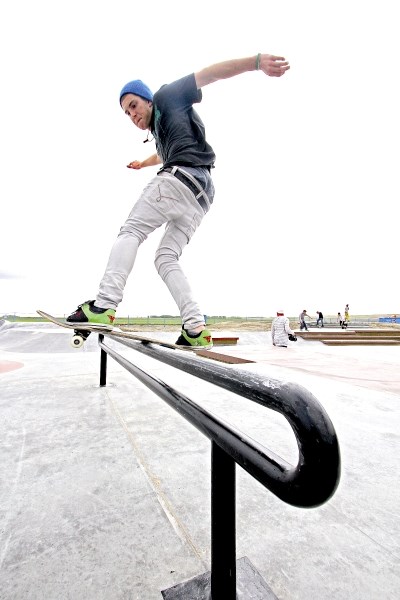 Sixteen-year-old Josh Healey, a team Sully Boardsports skateboarder, rides a rail at the new skatepark in Chinook Winds Park, June 1. The park is finished and open to the public.

The new Chinook Winds Skate Park is complete and now open to the public. However, the City wants to make it clear that the area immediately surrounding the park is a construction zone, which is closed to the public.

“We love the enthusiasm we’ve seen already and we know people are anxious to try it out,” said Rhonda Deaville-Erb, parks planner.

“We want you to get out there riding right away, so we’ve opened the skate park early. In return, we know you will use it respectfully so it doesn’t have to be completely closed off before the grand opening Aug. 28.”

It will include a snake run, street features, stairs, rails, ledges, ramps, bowls, planters, gaps and a viewing area.

“We really want people to get pumped about this but at the same time, we don’t want people destroying the outlaying areas,” said Shannon Howorko, president of the Airdrie Extreme Athletics Association, the fundraising group for the skate park.

“It is imperative that everyone realizes we are opening this early for you, but if you take advantage of that and seriously damage the surrounding areas, you will hinder the grand opening of the park.”

Deaville-Erb said there will be a zero-tolerance policy on graffiti in the area.

“This is also the construction access; please be respectful of all signage, construction equipment and workers,” said Deaville-Erb.

“They’re working hard to get the entire park area ready including a playground, multi-use court area, splash park, trail system and much more.”

The grand opening of the skate park on Aug. 28 from 11 a.m. to 4 p.m. will include live music, a barbeque, skateboarding companies from Calgary and Airdrie, raffles and draws. The skate park will be open 5 a.m. to 11 p.m., seven days a week. Check www.airdrie.ca for more details on all Chinook Winds park amenities and more information on the grand opening in August.