On May 27 at about 1:15 p.m., the Airdrie Integrated Traffic Unit responded to a motor vehicle crash in the southbound lanes of Highway 2 at the Yankee Valley Boulevard overpass.
Jun 4, 2010 12:00 AM By: Airdrie Today Staff 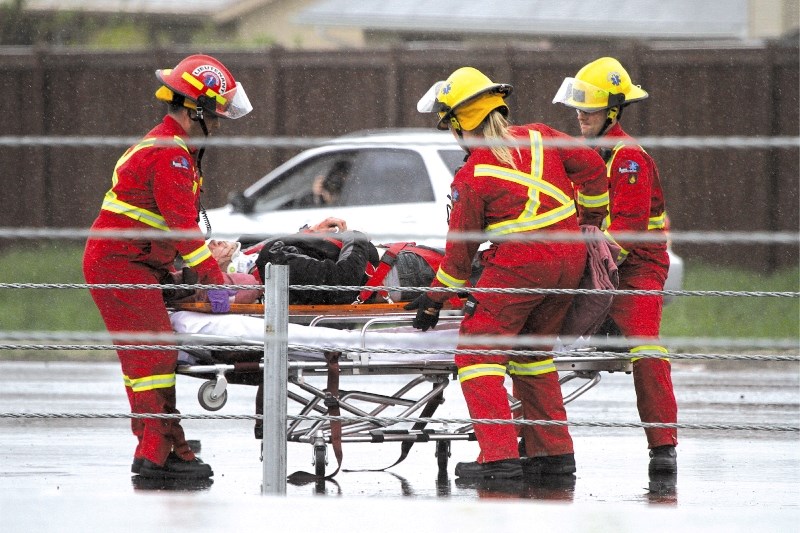 The driver of a Pontiac Sunfire receives medical attention after a single vehicle accident in Airdrie, May 27.

On May 27 at about 1:15 p.m., the Airdrie Integrated Traffic Unit responded to a motor vehicle crash in the southbound lanes of Highway 2 at the Yankee Valley Boulevard overpass.

A male driver of a red Pontiac Sunfire was travelling southbound when he lost control of his vehicle. The Sunfire drove over the centre median, striking the newly installed safety barriers. The barriers prevented the Sunfire from driving into oncoming traffic, however, the vehicle rebounded back onto the roadway and was struck by a southbound semi truck. The driver of the Sunfire was transported to Calgary hospital to be treated for non-life threatening injuries. The driver of the semi was not injured in the collision.

The matter remains under investigation at this time. Police would like to remind motorists to reduce speed through the construction zones and to be cautious when driving on wet, slick roadways.

A man was arrested on drug charges after a short police chase, May 22.

At about 3:15 p.m., the Airdrie Integrated Traffic Unit, comprised of RCMP and Alberta Sheriffs, were conducting speed enforcement on the northbound lanes of Highway 2 near Balzac. While conducting the checks, a grey Jeep Grand Cherokee was seen speeding through the construction zone. When officers attempted to stop the vehicle, the driver failed to respond and continued to proceed northbound.

The officers caught up to the Jeep Cherokee a short distance away on Highway 566, where the male suspect immediately pulled over to the side of the road. The suspect was arrested for fleeing from the police. The suspect was searched after he was arrested and police found several marijuana cigarettes. Seven pounds of marijuana was also found in the Jeep Cherokee. The street value for this seizure is $11,200. Fifty-seven-year-old Michael George Fedun, of Yorkton, Saskatchewan, faces charges of possession for the purpose of trafficking, trafficking and flight from police. Fedun will appear in Airdrie Provincial court on June 10 to answer to his charges.

An Airdrie man is dead after rolling his car near Vulcan.

At about 3:30 p.m. on May 29, the Vulcan RCMP, EMS, and Fire Rescue were called to a single vehicle motor collision on Hwy. 23, just south of Vulcan.

A 42-year-old man in a 1990 Oldsmobile was travelling southbound on Hwy. 23 when he failed to negotiate a left hand curve in the roadway. Once the vehicle left the pavement, the driver tried to steer the car back onto the pavement.

He lost control of the car and it slid sideways into the west ditch of the roadway where it rolled a number of times before coming to rest on its roof. The driver was the lone occupant of the vehicle and was declared dead at the scene of the collision. The name of the driver is not being released until his next of kin are notified.

The collision is still under investigation and it is believed that alcohol was not a factor.

On May 31 at about 5:25 p.m., Airdrie RCMP responded to a motorcycle collision in the southbound lanes of the construction area on Highway 2 within the city of Airdrie. A man driving a Harley Davidson motorcycle lost control of the bike when the wheels came in contact with the uneven surface. The bike came to rest in the left hand lane while the driver landed in the right hand lane. Several motorists stopped to assist and protect the driver by stopping their vehicles to prevent further harm to the driver. The driver, a 44-year-old Chestermere man, was transported by ambulance to Calgary hospital to be treated for non-life threatening injuries; at this time he remains in hospital in stable condition.

Police will not be releasing the name of the victim in this collision and no charges will be laid.

Sometime between midnight on May 26 and 11 a.m. on May 27, suspects entered a home under construction on Reunion Close, causing damage and removing tools and materials from the property. Locks were broken to gain entry into the home; all aluminum construction material and siding was taken from the residence. A locked trailer parked on the property was also broken into. Suspects caused damage to the trailer to gain entry giving them access to tools and equipment.

Stolen items include two ladders, a Dewalt 18-volt cordless circular saw, two Paslode siding staplers, a Dewalt Dakota 18-volt drill, an air hose reel and a Van Mark metal master brake. Some of the tools have the letters “GIN” etched on them.

The value of the damage and loss is estimated to be more than $5,000. This is the fifth time in 13 months that construction materials have been stolen from this area. Police are asking that members of the community work together to keep a watchful eye on properties in their neighbourhood and to pay close attention to suspicious activity in areas being developed.