Sale of 'Home For Hope' in Airdrie raises $200,000 for children's hospitals

A recent home sale in Airdrie will benefit children’s health-care in Alberta to the tune of more than $200,000.

Scott Strasser
Jun 15, 2021 10:00 AM
Previous Next
The Home For Hope in Airdrie sold for $825,000, and will result in the donation of more than $200,000 to children's hospitals in Calgary and Edmonton.Scott Strasser/Airdrie City View
Expand

A recent home sale in Airdrie will benefit children’s health-care in Alberta to the tune of more than $200,000.

“The home is now sold, so at this point, we want to be here together to give gratitude to the people who made this possible,” said Sam Iaquinta, the director of Castellano Custom Homes, who came up with the idea.

The motivation for the project was deeply personal for Iaquinta, as he has a son named Ben who received extensive treatment at both of the children’s hospitals in 2013.

“We spent quite a lot of time in both hospitals and I got to know the staff and people there,” Iaquinta said. “That's where we created the idea that what we do for a living is build homes. By doing that, we [figured] we could return something back to the community we work in. That's how it came about.”

The luxury home, which sold for $825,000, is packed full of upgrades, including a two-storey encased fireplace, upgraded lights and a high-end appliance package. Iaquinta said the house also comes complete with high-efficiency furnaces, upgraded insulation and special siding that will protect it from hail damage.

One of the house’s main selling points was the backyard, which backs onto a pond and fountain in King’s Heights, as well as the area’s walking paths. 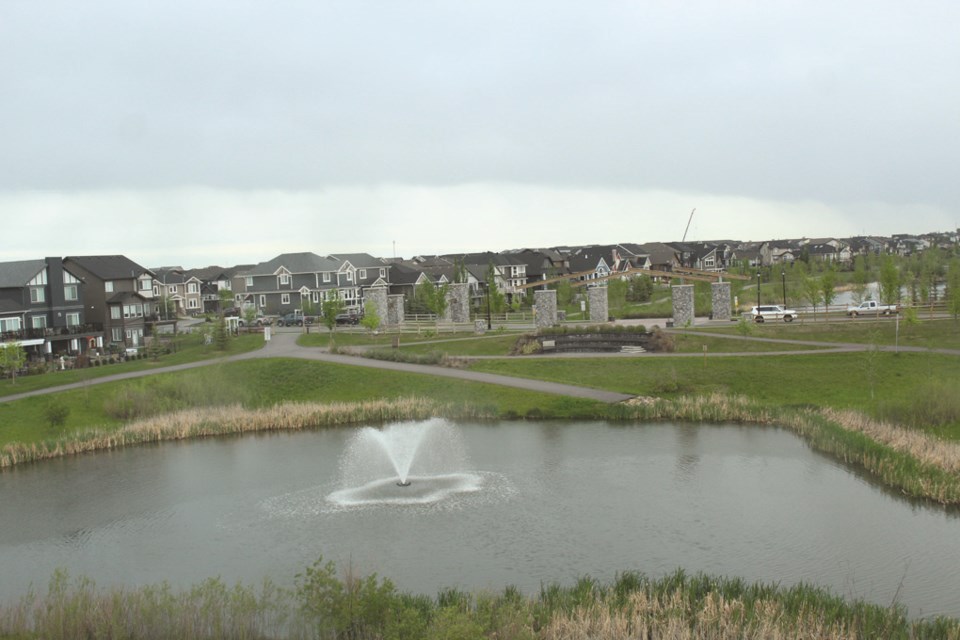 The home backs onto a pond with a fountain in the southeast neighbourhood of King's Heights. By Scott Strasser/Airdrie City View

“It's a beautiful lot and the backyard faces northwest, which means in the summer months, the backyard will have plenty of sun, and there's a lot of sun in the front in the morning,” Iaquinta said.

Differing from a traditional real estate approach, the home was sold online through Bōde – an online technology marketplace that allows people to buy and sell real estate without representation.

Jeff Jackson, the founder and vice-president of sales for Bōde, said the company was excited to partner with Castellano Homes on the Homes For Hope project, and offered its services pro bono.

“[The house] had been on the market previously and I think we had it for two or three weeks before it sold,” he said. “There was a lot of interest and several sets of buyers, some of whom were hovering had the sale not gone through.

“It's such a great initiative and learning Sam's story about his son and the troubles they had, we wanted to do our part,” Jackson added. “We were excited to take it on."

While the donation amount is still uncertain as the sale is in audit, Iaquinta said the house’s sale is expected to return a profit of more than $200,000, which will be donated to the Alberta Children’s Hospital Foundation and the Stollery in Edmonton.

Melanie Sortland, the manager of community initiatives and events for the Alberta Children’s Hospital Foundation, praised Iaquinta’s efforts, as well as others involved with the project.

“I know for him and the team, it's been long in the making and it's exciting it's coming to completion,” she said at the June 10 event. “It's exciting for them and exciting for the children and the families who will benefit from the donation.

“I'm excited for the new owners – I don't know them, but I hope they feel really good about their purchase and the difference they're making in the community. I hope they love the home as much as we do.”

Iaquinta said the project was only possible because of the generosity shown by local contractors, many of whom donated their labour or materials at a reduced cost or for free. He added Melcor Developments also sold the land for the home at a discounted rate, which further allowed for a larger profit to be made.

Mayor Peter Brown was also at the event June 10, and said it was fantastic to see a project like Homes For Hope come to Airdrie and support Alberta’s children’s hospitals.

According to Iaquinta, the family that purchased the home took possession on June 14.

Cause of Hillcrest fire under investigation, GoFundMe page set up for impacted families
Aug 11, 2022 9:55 AM