In a statement sent to the Airdrie City View on June 8, a spokesperson from RVS said the division's trustees started discussions on the possibility of changing the school's name last week.
Jun 8, 2021 4:00 PM By: Scott Strasser 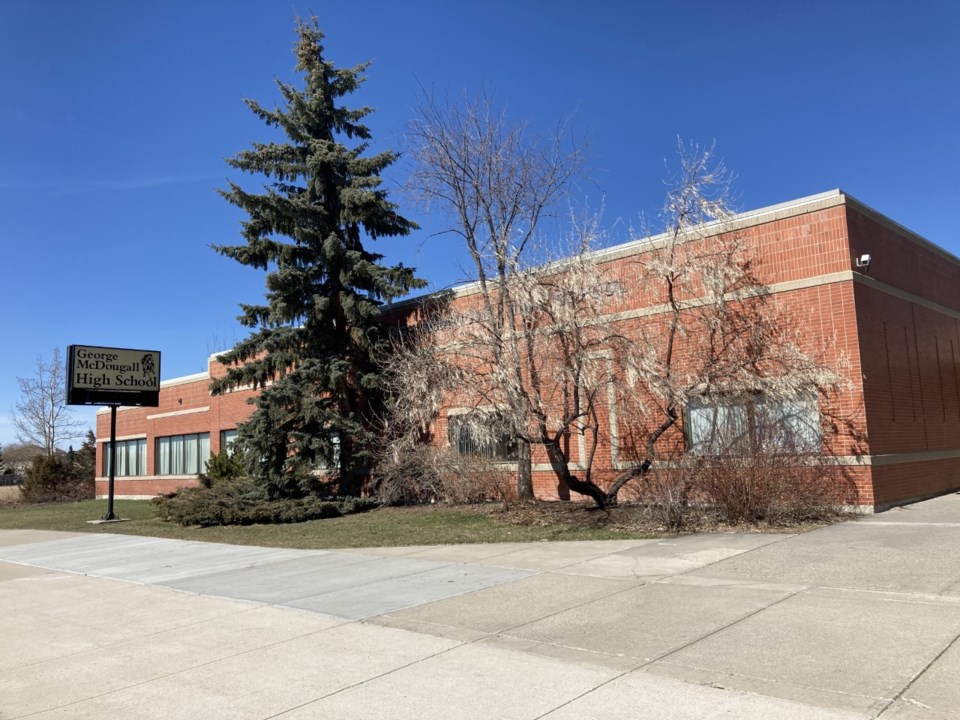 In light of the recent discovery of 215 Indigenous children's remains buried under a former residential school in British Columbia, a call-out has emerged to rename George McDougall High School in Airdrie.

Strathmore resident Steve Durrell, who ran for the Alberta NDP in the Airdrie-Cochrane riding in 2019, said he recently contacted Rocky View Schools (RVS) to inquire about the possibility of changing the local high school's name. The school, founded in 1962, is named after a 19th-century Methodist missionary.

“The reality is, while that might have been a thing that was celebrated in the past, today, they're looked on quite poorly. It's not appropriate when we're trying to reconcile with Indigenous Peoples to be at the same time celebrating and venerating someone like George McDougall, whose claim to fame in the area is creating one of these residential schools that caused so much pain and suffering for so many people.”

In a statement sent to the Airdrie City View on June 8, a spokesperson from RVS said the division's trustees have started to discuss concerns people have expressed about the school's name in the last week.

“The board believes this is an important issue that deserves careful and thoughtful consideration, as well as guidance from Indigenous leaders and feedback from our school communities,” the statement read. “Further exploration and dialogue will continue among the board, administration and with stakeholders.”

According to the statement, the naming of schools in RVS is guided by Administrative Procedure AP-5402 – Naming of Facilities. The procedure provides direction on the processes required to name one of the district's facilities.

“The AP does not specifically address re-naming facilities and what that process could look like is being discussed as well,” RVS' statement continued.

A delegation will also be heard at the June 17 RVS Board of Trustees meeting in favour of renaming the school. Kim Cheel, one of the presenters, said the presentation will delve into who George McDougall was, the impact of his orphanage and school, his lack of ties to Airdrie and the Truth and Reconciliation Commission from 2015.

“I know there's some confusion and some people have said 'he only did a day school,' but it's absolutely 100 per cent worth noting that day schools were no less traumatic than residential schools, just because the kids were allowed to go home at the end of the day,” Cheel said. “Just because he 'only' did a day school is not reason enough to laud him.”

According to a post on thechildrenremembered.ca, George McDougall founded the McDougall Orphanage and Home in Morleyville in 1876. His legacy also involved negotiating Treaty 6 and 7 in Alberta.

Calls to rename schools, universities and other such structures named after controversial historic figures have re-emerged since May 27, when news broke the remains of 215 young Indigenous children were discovered buried under the former site of the Kamloops Indian Residential School.

That finding has brought the multi-generational impact of residential schools back to the forefront of conversation, according to Dr. Cora Voyageur, a sociology professor at the University of Calgary whose research focuses on Indigenous issues.

“This is something that has really gotten some traction over the past while,” she said, citing incidences like the toppling of a statue memorializing Prime Minister Sir John A. MacDonald in Montreal last year and the recent toppling and desecration of Egerton Ryerson's statue in Toronto

“I know there have been people who don’t agree with those actions, including our premier, who talked about cancel culture and cancelling the history of Canada,” Voyageur said. “I guess my comment to that is that there is more than one history to our Canada – we can’t privilege one history in this country over another.”

Citing other examples of name changes in the region, Durrell mentioned the former Langevin Bridge over the Bow River in Calgary's downtown, which was renamed to Reconciliation Bridge in 2017. More recently, Langevin School in Calgary changed its name to Riverside School.

The namesake of the school, Hector-Louis Langevin, is one of Canada's Fathers of Confederation, and considered one of the architects of Canada's residential school system.

“[Changing a name] doesn't mean we're going to forget our history,” Durrell said. “In fact, it's important we continue to teach the history of things like residential schools and those behind them, so we don't repeat those mistakes and errors. It's also important at the same time that we're not celebrating those acts. We need to teach them and be cognizant of our past, but we don't need to necessarily celebrate the wrongs that were committed.”

While he said he did not intend to spearhead a campaign to pursue a name change for George McDougall High School, Durrell said he wanted to start a conversation about the school’s name and the missionary’s legacy, which is why he tweeted about the topic on June 2.

“It's something that is important to me, though,” he said. “My wife's family, some of her grandparents were in residential schools and it's important that my children know that past is something we're looking to change and isn't something we want to see carried forward.”

Voyageur added she is happy Canadians are starting to do more “soul-searching” with regards to the country’s colonial past, though she added there are still policies in place that keep systemic racism alive. She referenced the recent eight-year sentence provided to Thunder Bay resident Brayden Bushby, who was charged with manslaughter after killing an Indigenous woman by throwing a trailer hitch at her from a moving vehicle.

“The laws and policing services we get don’t protect us in the same way non-Indigenous people are protected,” Voyageur said. “That’s something we have to reckon with. We like to think of ourselves as being different, better and kinder than the U.S. or other countries, but we have our own dark history as well.

“We have to acknowledge that and decide as a country what we’re going to do to make things better and how we’re going to move forward. It’s not just an Indigenous issue, but a Canadian and societal issue. We all have to come to terms with this and look in our hearts where we’d like to go as a country.”