Students from across Rocky View Schools (RVS) officially have their first byline. By producing photos and articles for the new magazine Rocky View Geographic, these young journalists can now proudly see their names in print.
Feb 3, 2016 12:00 AM By: Airdrie Today Staff 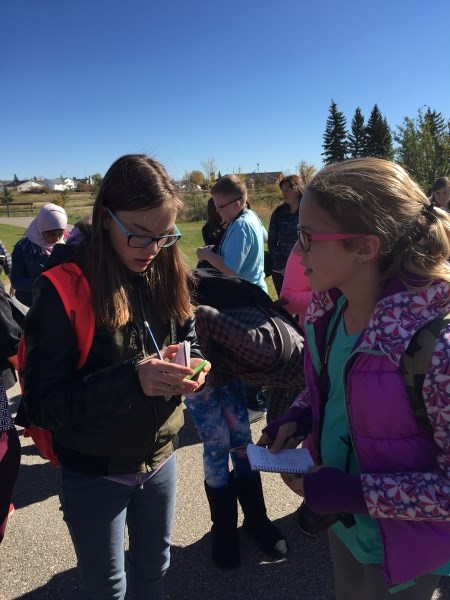 Students from Muriel Clayton Middle School in Airdrie explored areas like Nose Creek Park in order to take photos and write articles for inclusion in Rocky View Geographic, a magazine produced by more than 700 students from throughout the jurisdiction.

Students from across Rocky View Schools (RVS) officially have their first byline. By producing photos and articles for the new magazine Rocky View Geographic, these young journalists can now proudly see their names in print.

“The citizenship aspect of it was really great,” she said. “The (students) looked at their city a different way, through a different lens than they would have otherwise.”

More than 700 students in grades 1 to 9 from 13 schools in the jurisdiction participated in the initiative, which saw students go out into their community, take photos and produce articles on their learning.

“We were thinking about how to design learning for teachers, so they can design learning experiences for their students. We’re always looking for ways to make that authentic and real,” said Richard Gaudio, learning specialist with RVS.

“We find that when kids have a real world artifact, they do work and engage in high stakes. (Then), they have a product to be proud of.”

Teachers took the lead from Canadian Geographic, which lent design and layout inspiration to RVS. According to Gaudio, the magazine acted as “mentor and cheerleader,” allowing RVS to use their logo, name and persona as a model.

At Muriel Clayton, students were taught how to take quality photos and went out into the community to take photos and explore the city. Students explored residential areas near the school and took walks around Nose Creek Park.

“I liked taking the photos. Both residential and the nature photos,” Grade 7 student Kennedy Rice said. “(Those photos) kind of represented the urbanization of those ecosystems.”

Rice’s classmates Kate Hansen and Kaeleigh Frith echoed her comments, and said they too noticed growing pollution and garbage issues in Airdrie.

“Airdrie has a lot of garbage everywhere. A lot of litter,” Frith said.

Hansen focused her article on the impacts of humans on nature.

“We went around to take a bunch of photos, and mine was of a bridge. I wrote about how a bridge has an impact on Airdrie,” she said. “(It was about) if you construct a bridge, how will it impact nature around it?”

Turner said the issues highlighted in the magazine – from graffiti to water pollution – were “definitely student-driven.”

“They came up with a lot. They were quite observant,” she said. “Airdrie is growing, and they were really noticing what happens to the land. That was interesting for the kids to take that perspective.”

The project will have produced 20 Rocky View Geographic magazines in total, according to Gaudio. The magazines will “tour” RVS libraries, and could be shared as online PDF files in the future.

“We’d love for the community to see what they wrote about and what they saw and to extend that conversation,” she said.