A local resident is concerned about ground and surface water on her land downstream of a feedlot, located about five kilometres northeast of Airdrie. Lori Harnack lives about six kilometres downstream from the Thorlakson Feedyards Inc.
May 4, 2011 12:00 AM By: Airdrie Today Staff 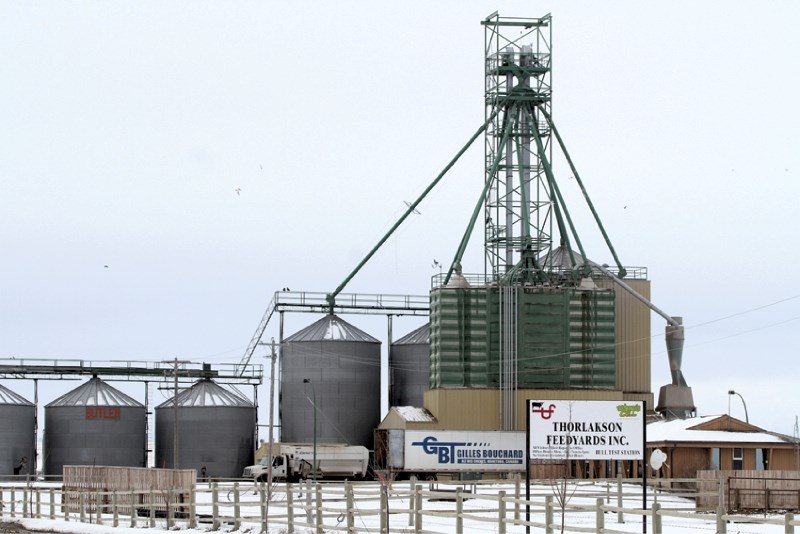 A local resident is raising concern about a large-scale feedlot operation, located northeast of Airdrie.

A local resident is concerned about ground and surface water on her land downstream of a feedlot, located about five kilometres northeast of Airdrie.

Lori Harnack lives about six kilometres downstream from the Thorlakson Feedyards Inc., a large-scale operation. She said a holding pond has been overflowing and the manure-contaminated water has been running into Rocky View County-owned ditches. She also contends that a local creek has dried up in recent years.

“My dream is to get our creek back,” said Harnack. “Nobody’s ditches look like these; this is gross. In the field there is so much pooling of manure water, there is no doubt to me it is going into the groundwater.”

According to Harnack, who lives on a farm that has been in the family since 1963, the creek started to dry up when the feedlot expanded in about 1996.

“It is a little creek, but it always trickled a bit,” said Harnack. “As my husband grew up, they used to play in the creek. You get no water and when you do (now), it is very dirty. I don’t even want my dog in it.”

She said the feedlot’s dam burst in 2003 and again in 2005. The fecal count was extremely high when the water was tested after the 2005 event, she added.

In 2008, the Natural Resources Conservation Board (NRCB) issued an enforcement order on Thorlakson Feedyards Inc. to separate run-off from a spring existing in the feedlot property.

According to Alasdair MacKinnon of the NRCB, the operation built infrastructure including a catch basin to contain surface water and culvert to mitigate the problems. It was built to provincial standards, said MacKinnon, who added that complaints registered with the NRCB’s hotline prompted a visit to the site on April 18, 2011.

During that visit, MacKinnon said manure-contaminated water was overflowing from a containment pond and entering county ditches where it eventually meandered back to Thorlakson’s land.

He said the operator took mitigation measures, which included temporarily removing a berm around its culvert system.

The overflow likely came as a result of this year’s late spring and heavy precipitation, he added.

“Normally, they would be irrigating in late March,” said MacKinnon, adding it is against provincial regulations to irrigate on snow or frozen ground.

“This is an exceptional year.”

MacKinnon said there is no environmental risk for anyone at the site, although he recommends rural residents reliant on well water regularly monitor their water quality.

“There are no concerns as far as risk to the environment,” said MacKinnon.

Feedlot manager Milton Scott agreed saying there are no concerns about contaminating the ground water either.

“The water is not seeping into the ground,” he said.

“It is a clay base that has been engineered to spec. There’s a secondary dam a mile from the feedlot on our land that is engineered to hold any overflow.”

Scott added the local creek isn’t a year-round waterway, but generally only has water in it in the spring.

Scott said the organization has met every regulatory environment and has done nothing wrong.

“Thorlakson Feedyards has nothing to hide, nothing to be ashamed of,” said Scott. “I am very proud of the company I work for.”

Area Councillor Greg Boehlke said he has heard complaints about the situation for at least four years.

“Since the NRCB and Alberta Environment were looking at them, they have been doing quite a bit of work at the feedlot,” he said.

“But I still keep getting complaints. I feel handcuffed.”

Boehlke added that although he supports feedlots, perhaps the Province should be testing wells downstream.

He said such issues are solely under the jurisdiction of the NRCB.

“Upgrades were apparently completed to the satisfaction of the NRCB,” said Dietzler. “We assume the NRCB is taking appropriate action and we hope they are.”

Dietzler added that any concerns regarding agricultural runoff should be reported to the NRCB on the organization’s 24-hour hotline at 1-866-383-6722.

“We have a number of feedlots in Rocky View and we certainly do support the continued operations of the beef industry,” said Dietzler.

“From an agricultural point of view, it is important these operations be supported. On the other hand, if there are environmental concerns, those need to be dealt with as well.”