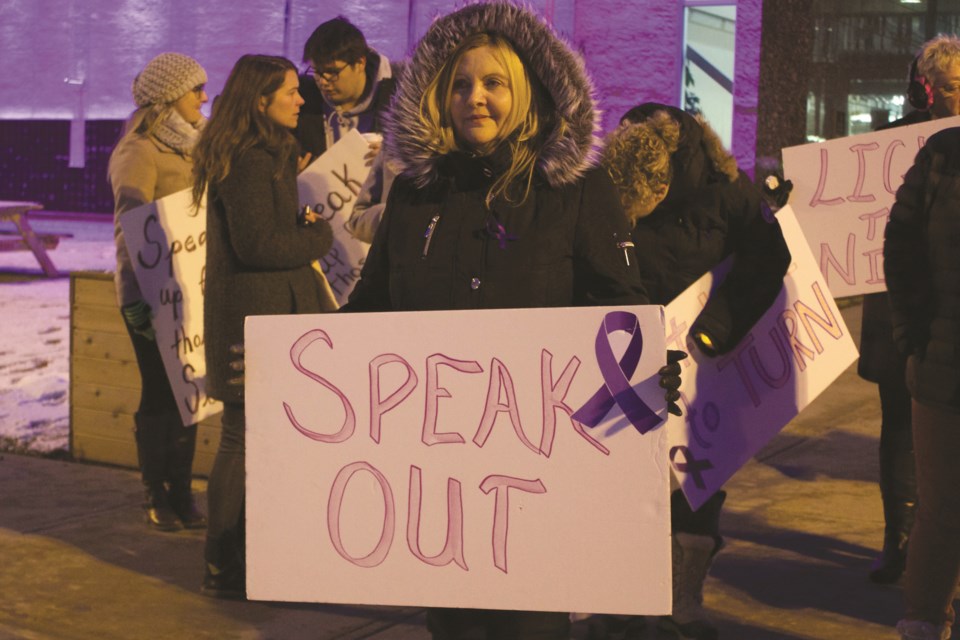 A small group departed the purple-lit City Hall Nov. 4, carrying lights and signs with slogans promoting awareness of family violence prevention during a Light the Night ceremony and vigil walk.

The event, according to Community Links Community Engagement Manager Laurie Jacob-Toews, served as the kick-off of Family Violence Prevention Month in Airdrie.

“It just is a time for us to increase awareness about family violence in the community,” she said. “This year’s theme is ‘Where to Turn,' which is really about raising awareness so people know where they can go if they are impacted by family violence.”

According to Jacob-Toews, Family Violence Prevention Month started in 1986 in Hinton, Alta., when a group of women launched an education and prevention campaign. The campaign has since expanded to the entire province, and she estimated it has been observed in Airdrie for the past 15 years.

Jacob-Toews said, according to the Canadian government, one in four violent crimes in Canada involve a family member, and less than one in five of people abused by their spouse report family violence.

“We know, on a global scale, across Canada and in Airdrie and Alberta, it is a concern and something we need to talk about,” she said.

According to Insp. Kimberley Pasloske, detachment commander of Airdrie RCMP, local occurrences of spousal abuse have decreased – there were 679 domestic violence files in 2018, the most recent year available, compared to 819 in 2017. The rate is similar to detachments in other Alberta municipalities with a population of 60,000 or greater, she said. Still, family violence remains a priority, she said, and one case is “too many.”

“We don’t want to have any,” she said. “Although our stats aren’t very much different than other communities, we still see domestic violence as a real issue that we do need to address.”

Several resources exist in Airdrie, Jacob-Toews said. Community Links, Airdrie and District Victims Assistance Society (ADVAS), the RCMP, and Airdrie P.O.W.E.R. are among the local organizations that are equipped to help anyone facing family violence, and a full list of resources is available at the Airdrie Public Library (APL).

“If you are in a situation where you are feeling threatened and you don’t have anywhere to go, you do have somewhere to go,” Mayor Peter Brown said. “You can call 911, you reach out, talk to a mentor, a friend, a coach, a teacher at school, whatever the case may be. There’s help out there for you, so don’t suffer alone. We’re here to help.”

According to Jacob-Toews, 75 per cent of people who read or heard about family violence prevention indicated they now had better knowledge of how to help, demonstrating the importance of Family Violence Prevention Month.

Several events are planned for the month to raise awareness on the issue. Events are planned through a committee of partners that includes representatives from Airdrie Housing, Community Links, Alberta Health Services and its Mental Health Capacity Building in Schools Initiative, ADVAS, Airdrie P.O.W.E.R., Airdrie RCMP and Stepping Stones to Mental Health, Jacob-Toews said.

On Nov. 20, a free presentation hosted by the Calgary Women’s Emergency Shelter will take place at APL from 7 to 8 p.m.

“That presentation is really for the public, and it’s geared at people to help them understand when someone they know and love may be going through family violence,” Jacob-Toews said. “It’s how to recognize family violence or, if someone might be in a situation that’s not healthy, how to respond, how to refer, and then also the facts and myths about family violence.”

The following week, Community Links will host an elder abuse awareness tea Nov. 27 from 1 to 2:30 p.m., which Jacob-Toews said will help encourage conversations around elder abuse, which is sometimes a forgotten topic. Due to limited space, attendees are asked to RSVP online at nrvcl.ab.ca or by calling 403-945-3900.

Oranj Fitness will also hold a yoga class to fundraise for the events, Jacob-Toews said. Details are still being finalized, and were not available by press time.

The RCMP will give presentations at local high schools outlining the signs of an unhealthy relationship throughout the month of November.

Some private events on personal safety and a Celebration of Healing are also planned, which are free of charge and confidential. Jacob-Toews can be contacted at 403-945-3900 for more information on these events.

Airdrie sees increase in crimes against individuals
Nov 7, 2019 9:00 AM