Nose Creek Elementary was presented with a trophy and a plaque for being the top fundraising school in the Ronald McDonald House’s pull tab competition.
Jun 8, 2010 12:00 AM By: Airdrie Today Staff 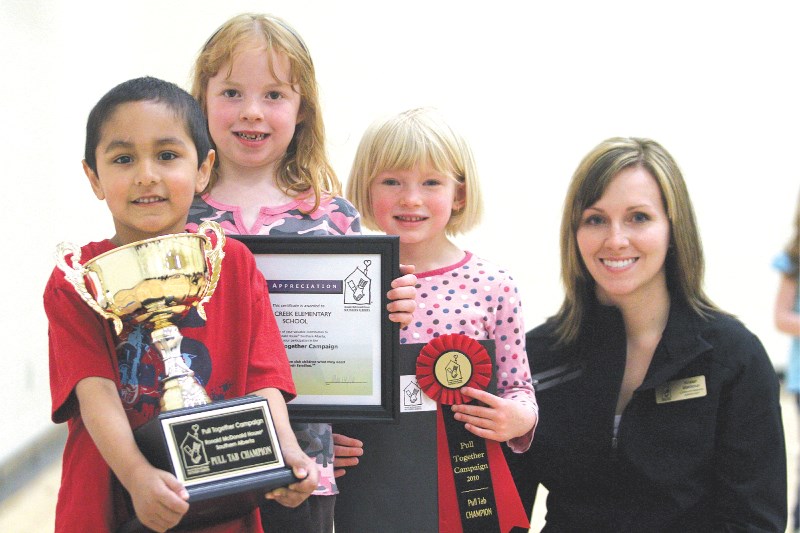 (Left to right) Nose Creek Elementary School students Karman Khehra, Morgan Sorsdahl, Miikka Weigumaap and the Ronald McDonald House&#8217;s Kristen Staldeker pose for photos after the school was presented with a trophy and plaque for being the top fundraiser in the pull tab competition, June 1.

Nose Creek Elementary was presented with a trophy and a plaque for being the top fundraising school in the Ronald McDonald House’s pull tab competition.

At the start of the school year, students began collecting the pull tabs off of the tops of pop cans to donate to the Ronald McDonald House.

The students collected 112.9 pounds of pull tabs, the equivalent of more than 175,000 tabs. The exact amount of money raised from the tabs was not available at press time.

“The event itself was to help raise money for a good cause,” said Nose Creek Elementary School Principal John Murphy. “The overarching effect was to pull a group of 540 together for a common cause.”

The school was not aware that the other 15 schools partaking in the fundraiser were competing against one another. It wasn’t until the last few weeks that the school knew it was a contest.

“The kids were pleased to bring in as many tabs as they could to show they were doing their part to support a cause,” said Murphy. “The real enthusiasm came in the last few weeks when the students knew they were nearing the end.”

Murphy said he is proud of both the students, and teacher Jan Laubman who brought the idea to the school.

“The enthusiasm and energy of all the schools who participated in the event was an inspiration to the families, staff, and volunteers,” said Kristen Staldeker, Ronald McDonald House representative. “We are thrilled to announce we raised more than 1.2 million pull tabs. Thank you to all the students, teachers, administrators and all involved for making this competition possible.”