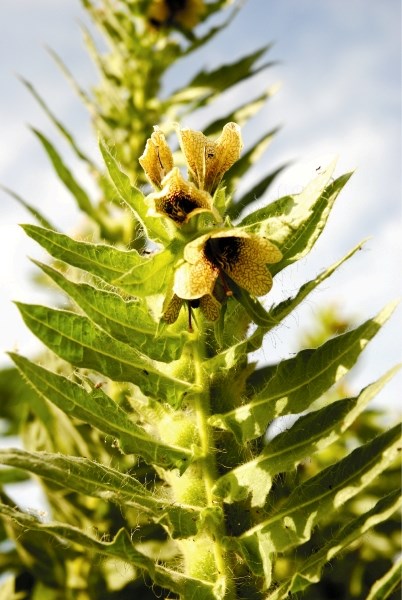 Black Henbane, an invasive plant native to Europe, is a poisonous weed that is on the Alberta noxious weed list.

The Act consolidates existing regulations and expands the list of invasive plants, many of which are not currently found in Alberta, but live in bordering provinces and states.

“Rocky View is now operating under the new Act,” said Tim Dietzler, Rocky View County agricultural fieldman. “That includes a number of new plants that are being regulated.”

Several of the new species that have been added to the list are ornamental plants that have escaped from people’s gardens.

“We named species that are non native, something that scientifically has been demonstrated to significantly impact native area, riparian areas and agricultural lands,” said Dietzler. “Most of the new species are European in origin.”

These weeds are generally problematic, said Dietzler, as there are few native controls such as insects. An example is Dame’s Rocket, a fragrant short-lived perennial that has been found in small infestations in the county.

According to Dietzler, the last revision of the Act was in 1995, and this revamp looked broader to incorporate invasive species from outside of native lands in addition to agricultural weeds.

The new Act also puts more of an onus on urban centres to control weeds.

“It clarifies that all municipalities have to manage these invasive plants,” said Dietzler. “Often they start in urban areas.”

For more information or to report a weed sighting, call the Rocky View Agricultural Service at 403-230-1401.