RCMP detachments in Alberta have been implementing the province’s Crime Reduction Strategy (CRS) for the past six months, and according to RCMP Superintendent Peter Tewfik, early results are positive.
0
Sep 13, 2018 12:01 AM By: Airdrie City View 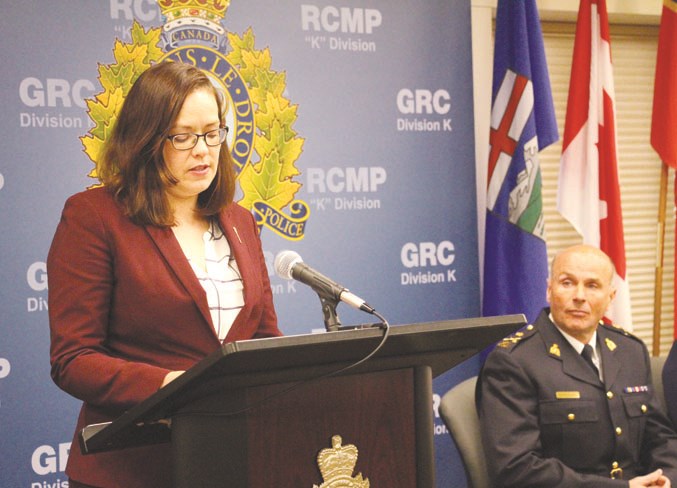 Minster of Justice and Solicitor General Kathleen Ganley said the RCMP&#8217;s efforts at reducing crime through the province&#8217;s Crime Reduction Unit is working, based on statistics released Sept. 4.

RCMP detachments in Alberta have been implementing the province’s Crime Reduction Strategy (CRS) for the past six months, and according to RCMP Superintendent Peter Tewfik, early results are positive. “We’ve looked at the data, and I can tell you our crime reduction strategy is working,” he said during a Sept. 4 press conference in Airdrie. “Mid-way through our first year of implementing the strategy, our data indicates our policing approach is making a difference.” As a direct result of the CRS, Tewfik said, there had been 648 fewer motor vehicle thefts and 366 fewer break and enter incidents in Alberta this year compared to last year. The number of thefts has also declined significantly, he said, with 2,358 fewer taking place in Alberta in 2018 compared to 2017. Property crime is a particular focus of the CRS, and, according to statistics released by RCMP Sept. 4, this type of crime – excluding fraud, mischief and arson – decreased nine per cent between January and July in all Alberta RCMP detachments, compared to the same period last year. In rural detachments alone, the release stated, these types of crime decreased by 11 per cent. Since their inception in February, statistics revealed, Alberta CRUs have made more than 500 arrests and laid approximately 1,600 charges. Minister of Justice and Solicitor General Kathleen Ganley said the CRS is clearly working. “In the six months since we announced $10 million in funding for a seven-point action plan, RCMP has recorded a noticeable decrease in property crimes,” she said. “We’ll continue to support the RCMP and our police partners to help ensure Albertans live in safe and secure communities, no matter where they call home.” The province has increased grants to rural crime-watch programs, she added, to “ensure they can include all those people who want to help out.” When asked if the government would consider giving crime-watch volunteers tax breaks, much like volunteer firefighters, she said it’s something the province would explore. “It’s certainly something that we can look into, because of the increase in the number of people coming forward,” she said. The Southern Alberta CRU was opened at the Airdrie RCMP detachment in February with a total of nine RCMP members working across southern Alberta, from the southern border to just south of Red Deer. Three other CRU offices are located elsewhere in the province.