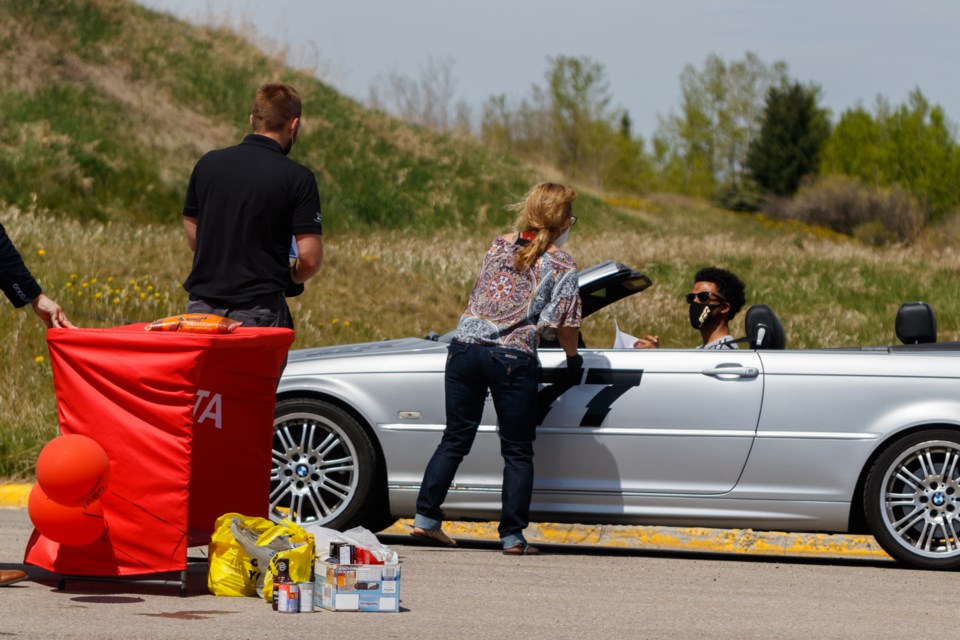 Tickets are handed out for

COCHRANE— The "Movie Under the Stars" drive-in event has sold-out.

"Movie Under the Star" hosts the Young Professional Rotary Club of Cochrane held their official ticket launch for the Cochrane Activettes fundraiser “Movie Under the Stars” on Friday (May 29) at Cochrane Toyota, and cars were backed up along the block with food donations ready to get their ticket.

“We tried to make it available for anyone,” said Young Professional Rotary Club of Cochrane head representative Ryan Baum, adding that he hoped the local access in Town would allow easy accesibility for Cochranites.

The tickets became available at 1 p.m. and Baum said within the hour they had handed out between 60 to 70 tickets.

Onward is a special treat to show because it gives families a chance to see the movie on the big screen, Baum said. The film hit theatres a few weeks before COVID-19 health regulations caused the province to go into lockdown limiting those who were able to see it.

Onward tells the story of two brothers who’s father dies leaving them with a note explaining how he can be brought back to life.

“They go an adventure to bring him back, It’s a family-friendly Pixar film which we’re excited about,” Baum said.

There were 200 tickets available for the drive-in.

The group decided to move to tickets due to the excitement surrounding the drive-in movie, Baum said, explaining that within one-week they had 5,600 people visit their Facebook page indicating they were interested in attending the event.

The event was originally planned to be general admission, he said, because they were not sure what kind of response they would receive and wanted to be able to open it up to everybody.

The incredible interest caused them to adapted their approach and transitioned to tickets to ensure they could limit the number of people showing up to the drive-in.

When "Movie Under the Stars" was first announced, they planned on allowing 300 cars to attend. However, Baum said, after taking a closer look at the parking lot they decided to reduce that number.

The number of available spots was decreased he said to comply with current COVID-19 public health regulations.

“COVID has put a whole other challenge in this event,” Baum said. “We’re trying to adapt to the COVID regulations and make sure that we can run it safely for everyone.”

"Movie Under the Stars" is free of charge and takes place at the Spray Lake Sawmills Family Sports Centre. Gates for the show open at 8:30 p.m. and the movie begins at 9:30 p.m. The audio will be transmitted through a radio frequency. No washrooms or concessions will be available due to COVID-19 public health guidelines.

“We’re overwhelmed and excited by the turn-out and the people interested,” Baum said. He added that with the success they have found they plan on hosting another feature in July.

The goal of the drive-in movie is to uplift the spirit of Cochranites during the COVID-19 pandemic while supporting the Cochrane Food Bank which has been under pressure during the pandemic.

Baum said they hope to raise some money to help the Fodd Bank finish its expansion project. He added that he hopes guests bring food donations as well.

“Hopefully this raises the spirit of Cochranites and we can have some fun while we do it,” Baum said.

"Movie Under the Stars" is especially exciting, he said, because this is the first event the Rotary Young Professional Club has hosted.

They hope to take what they have learned from the drive-in and make an even greater experience for guests at the next event.

“We’ve just been blown out of the water,” Baum exclaimed. “Hopefully the next event will be better and better."