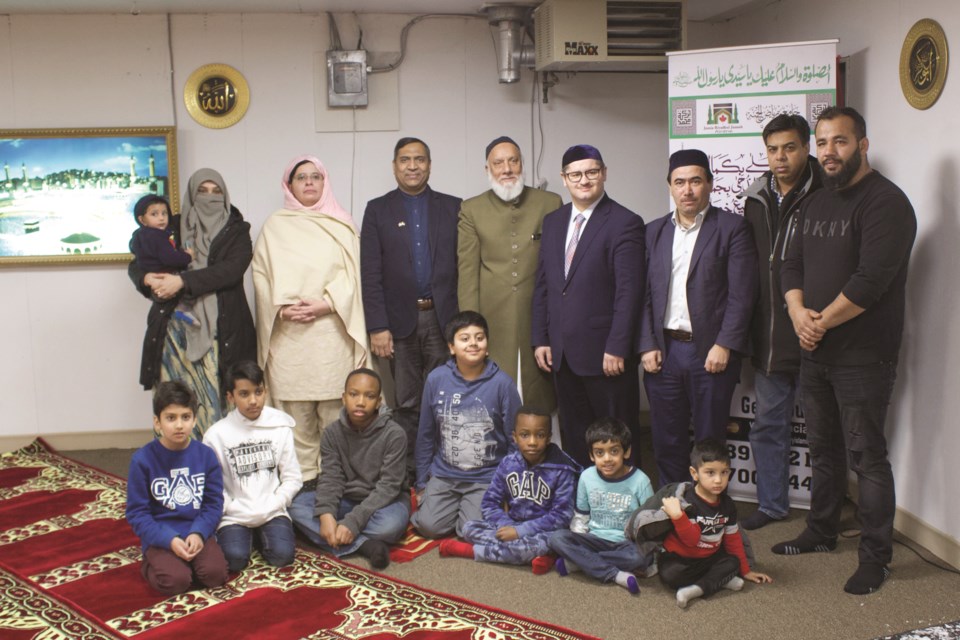 Members of Airdrie’s Muslim community are pleased to finally have a permanent place to worship.

“This is the first mosque [in Airdrie],” said founder Syed Soharwardy, who is also the founder of the Islamic Supreme Council of Canada, to which the mosque belongs.

Jamia Riyadhul Jannah Masjid – which Soharwardy said translates to “garden of heaven” – is located downtown at 121 2 Ave. on a property that was purchased in 2018 with the intent of constructing a mosque. Currently, the facility operates in two existing buildings – a former garage has been converted to host daily prayer, with separate areas for men and women, while a house on the property is used for meetings and children’s classes.

The eventual goal, Soharwardy said, is to demolish the two buildings and construct a mosque, complete with a dome and minaret. While the project remains some distance away, he estimated a preliminary cost could be around $2 million.

The property is currently owned by the Al Madinah Calgary Islamic Assembly, but Soharwardy said the plan is to eventually transfer ownership to the Muslim Council of Airdrie (MCA), which is responsible for the mosque’s operations.

“I believe it’s a very good thing that we have got a permanent place,” said Mona Shehzad, MCA general secretary.

For years, Airdrie’s Muslim population – which Soharwardy estimates is somewhere between 2,000 and 3,000 people, and growing – faced challenges finding a place to worship. Al Madinah Calgary Islamic Assembly began hosting prayers on Fridays and during Ramadan at the Airdrie United Church about 11 years ago. However, as the community grew, the need for a permanent mosque increased, leading to the purchase of the site. In 2018, members of the local Muslim community opened the Airdrie Islamic Centre (AIC) in a rented property near Safeway – Soharwardy clarified AIC is not affiliated with Jamia Riyadhul Jannah Masjid.

The current buildings require some renovations – including improvements to parking and washrooms, the addition of a kitchen and wheelchair accessibility – before it can accommodate larger Friday prayers. For the time being, Friday prayers are still occurring at the United Church, but some children’s classes are being held at the centre.

According to Shehzad, the mosque serves a purpose beyond being a place for religious worship or learning.

“It’s not just a place of worship,” Soharwardy added. “It’s a place where we help each other, where we discuss issues.”

The mosque is also “not just a place for Muslims,” according to Shehzad, but is open to anyone in the community, regardless of religious beliefs.

As the renovations continue, treasurer Shehzad Awan said the mosque will need to surmount some financial challenges.

“This mosque is in dire need of funding from the community – from the Muslim community and the broader community,” Awan said.

Soharwardy said he was confident, as with any church or temple, congregants will donate to meet the mosque’s needs. Currently, donations are being used for renovations – which will cost approximately $21,000 – along with day-to-day operations and paying off the purchase of the property.

More information about Jamia Riyadhul Jannah Masjid can be found at mcamosque.com