A group of residents in Irricana and Beiseker are hard at work to bring a trail project to fruition. Jeannette Richter, chairperson for the Meadowlark Society Steering committee, said the trail would use land from a decommissioned CP Rail line.
Apr 17, 2018 12:00 AM By: Ben Sherick 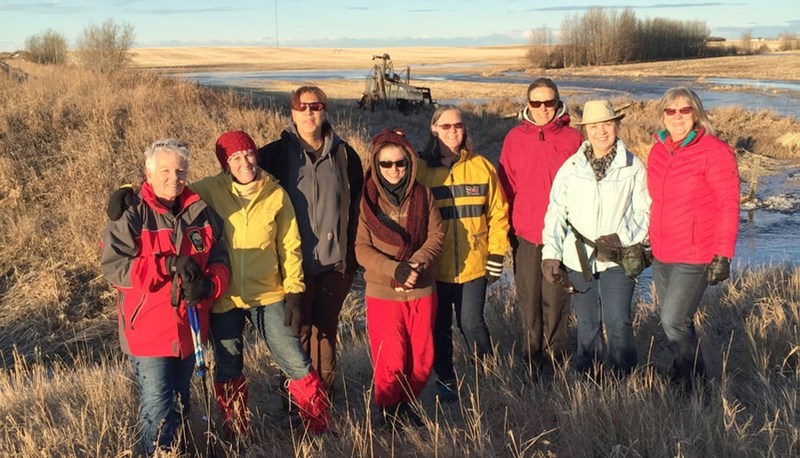 Members of the Meadowlark Society stand along a portion of the future trail connecting Irricana and Beiseker.

A group of residents in Irricana and Beiseker are hard at work to bring a trail project to fruition.

“The trail bed has remained unused and abandoned since that time,” Richter said.

The Meadowlark Society was formed to bring about the completion of the trail. Richter said the 10-kilometre (km), non-motorized trail would connect Irricana to Beiseker, crossing the Rosebud River and Crossfield Creek on the way. Eventually, the trail will connect to Trans Canada Trail’s Great Trail, a series of pathways that connect coast to coast across Canada.

“It would be a beautiful prairie trail with a high blue sky and fresh air,” Richter said.

“It’s quiet and you can see to the horizon on the east side. It’s beautiful.”

Richter said some residents do currently use the rail bed, but some obstacles keep it from functioning as a proper trail.

“From Irricana, people do walk on it, they go on the trail. But from Beiseker, there’s a very deep gouge in the rail bed,” she said. “CP Rail took a culvert out to discourage people from going on it with their ATVs and quads.”

The committee’s vision for the trail is a hard surfaced path 5 metres (m) across, with another 5 m of mowed land on either side.

However, the project is currently in the planning and feedback stage, and Richter said the committee hopes to hear from residents of the two communities.

“We do have a vision of what the trail will be like, but we want to make sure that we’re listening to our communities and the people that will be walking and using the trail,” she said. “This is why we are asking them what they would like to see on the trail.”

The committee currently has a survey available at meadowlarktrail.ca, where residents can submit feedback on the trail. Richter said they also plan to have open houses in Beiseker and Irricana sometime in early May. The committee will then go before Rocky View County council to request a land use bylaw redesignation for the property.

Following that, the culvert needs to be replaced and bridges over the Rosebud River and Crossfield Creek must be built before the trail can be completed. Richter said Trans-Canada Trails will fund those projects.

“If the County approves this, than we will be starting the construction of the culvert and the bridges this summer,” she said.

The committee will need to find other ways to pay for the rest of the project.

“There might be some small monies for a small portion of the trails, but this is a long-term project,” Richter said. “We have formed a society and we will be raising funds and trying to get gifts in lieu, and we will be having to involve the community.”

Overall, Richter believes the Meadowlark Trail will be valuable for both Irricana and Beiseker. That value will come through increased connectivity between the two communities, allowing another route of travel for students living in Irricana and enrolled in school in Beiseker or simply providing another opportunity for residents to get outside to enjoy sunshine, fresh air and activity.