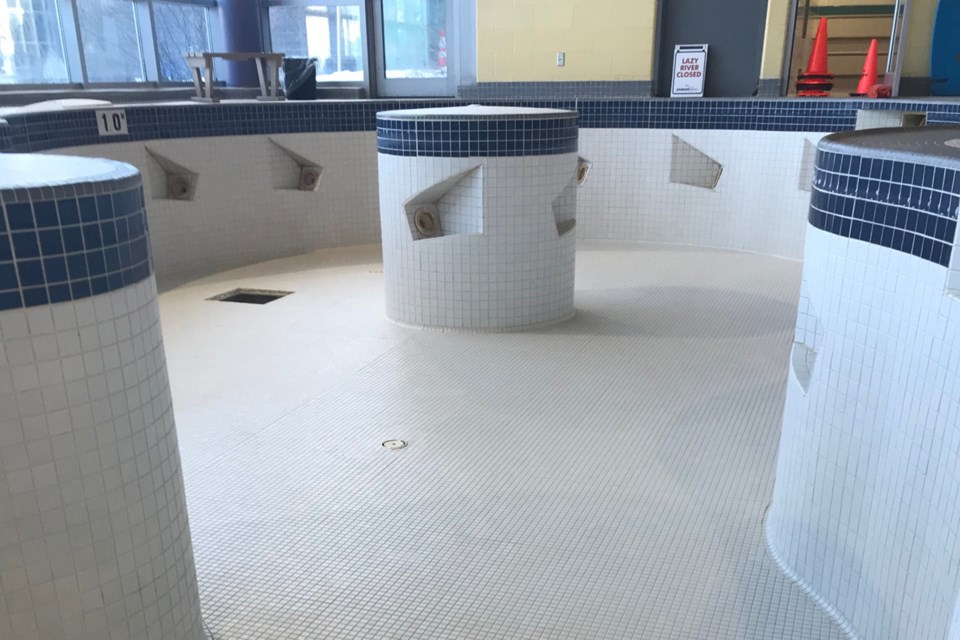 With Genesis Place Recreation Centre closed for the foreseeable future, general manager Brad Anderson said staff is taking the opportunity to complete a number of maintenance tasks on the pool and other amenities.

“We’re only closed for three to four days a year, so facilities like ours never really get an opportunity to close and actually do deep cleans and more intensive maintenance on things where it's hard to reach when customers are in the building,” he said.

Typically, according to Anderson, a shutdown is required every few years to perform these maintenance chores – the next one scheduled for Genesis Place was in 2021. However, with the unexpected closure a few weeks ago, he said, tackling the chores ahead of time will mean fewer interruptions to customers when the doors open up again.

So far, the pool has been drained, allowing crews to begin working on a number of different projects – replacing drain covers, giving the basin an acid pressure wash to get the old paint out, and then repainting the basins.

“We’re also doing a ton of work in the basement with some mechanical work, so replacing pumps, adding some new chemical lines in and some pool controllers, which was all scheduled to take place in 2021,” Anderson said.

But it’s not just the pool getting a bit of a make-over during this unexpected closure. Anderson said the larger tasks identified will give crews enough work to keep them busy over the next 90 days, at least, before they can move on to smaller chores like putting up a new curtain to divide the gymnasium and replacing all the lighting within the facility.

“We had a grant from the government to replace some of our lighting with LEDs, so we're taking that on as a project,” he said. “We're just kind of moving amenity by amenity, identifying the work that can be done while we're while we're closed.”

Although more than 180 casual City workers were laid off March 20, Anderson said around a dozen employees are still taking care of things behind the scenes at Genesis Place, Ron Ebbesen Arena and Plainsmen Arena, performing maintenance and administrative work.

“This is usually the time of year where we start mapping out all of our rentals for the next September to June season and inputting all the programs into our system,” he said. “We’re still maintaining our normal timelines for planning for the facility, but a lot of our frontline workforce has been laid off – the people that actually deliver on the programs and services that we offer.”