Local students participate in walkouts in support of GSAs 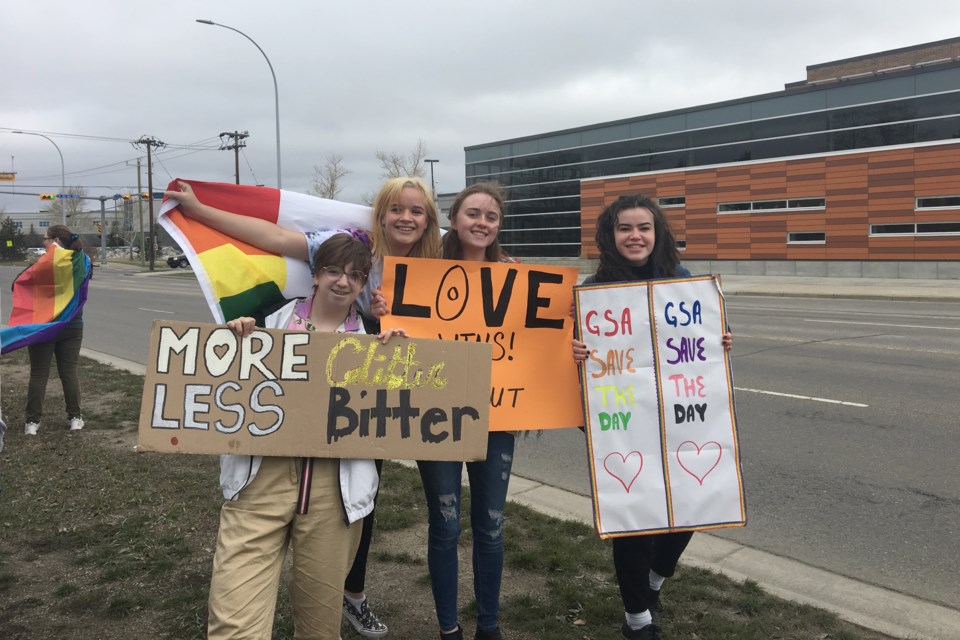 Jacelyn Hawes (second from left) and other students at Bert Church High School took part in a student-led walkout May 3 to demonstrate their opposition to changes of legislation that could eliminate protections for gay-straight alliances. Photo Submitted/For Rocky View Publishing

Airdrie students joined their peers across the province in a demonstration May 3, walking out of school in protest of proposed changes to education legislation that could remove protections for gay-straight alliances (GSAs).

Jacelyn Hawes, a Grade-11 student at Bert Church High School, took part in her school’s student-led demonstration. She was motivated, she said, to support friends who participate in her school’s GSA, and because she thinks it’s important for people to “stand up for what they believe is right.”

“Sometimes, it’s really hard for individuals to be able to express themselves, because they feel pressured or viewed badly,” she said. “At the GSA, you can just be yourself.”

According to Hawes, students at her school – along with pupils at George McDougall High School and W.H. Croxford High School – skipped the first class of the day. At Bert Church, Hawes said, students crossed the street to demonstrate in front of the school with flags, chants and signs.

Similar walkouts were held across Alberta, in response to a vow made by Premier Jason Kenney in the recent election.

During the campaign, Kenney announced his intention to replace the School Act with the former Progressive Conservative government’s Education Act. The move would eliminate Bill 24, which mandates principals must immediately grant permission for GSAs upon request by students, and limits school administrators from disclosing any information about the groups other than their existence.

While the Education Act does leave room for principals to permit GSAs, it lacks the strict requirements put in place by the New Democratic Party when it was in power.

At a campaign rally March 26, Kenney claimed the Education Act would, “have the strongest legal protection for GSAs of any province in Canada.”

“We oppose mandatory notification of parents about membership in peer support groups, including GSAs,” he said. “We support GSAs.”

However, Kenney maintained his party wanted to strike a balance between, “the protection of kids and the support they need,” and the rights of independent schools that oppose GSAs on religious grounds.

Prompted by the walkouts, newly-appointed Education Minister Adriana LaGrange issued a statement May 3.

“Our government has been very clear: we do not support mandatory parental notification or ‘outing’ of any student,” the statement read. “We do strongly support efforts to make our schools in Alberta free from bullying, by providing peer support, counselling and safe spaces for all students in our province, especially those subject to bullying or prejudice because of their sexual identity.”

LaGrange added the most important part of her job is to listen, and she hopes to hear from students in order to better understand their concerns.

Kiersten Mohr, president of Airdrie Pride Society, said GSAs are vitally important for LGBTQ2+ youth, since they provide a safe, supportive and private space for young people to process their identity and sexuality at their own pace during a particularly vulnerable stage of life. Mohr said she feared the government’s proposed education legislation would remove the privacy of those groups, thereby discouraging youth from participating in them.

“There’s a group of youth that are now caught, because they may have disclosed to people in the GSA world of their identity, their sexuality, and may not have had that conversation at home yet,” she said. “If the legislation gets changed, they find themselves in a position where they don’t have that protection, and that’s a really, really vulnerable, terrible place for these youths to be in.”

Even if protections for GSAs are eliminated, Mohr said, Airdrie Pride Society’s Prysm program will remain a safe, private and supportive space for local youth to find belonging.

She added she was proud to see local youth – who were not of voting age during the recent election – take a stand and use their voices to make a statement.