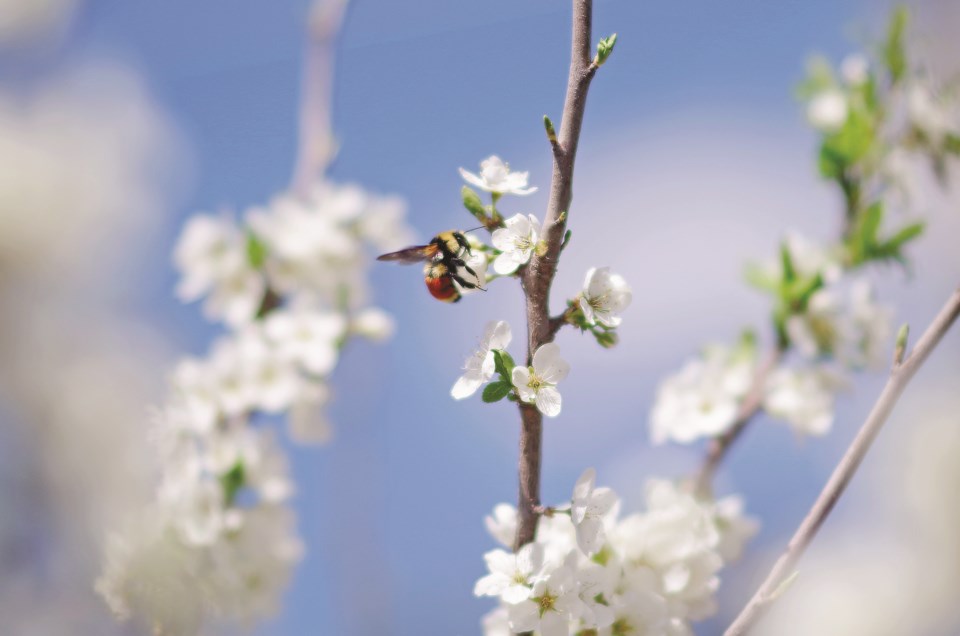 A national pollinator recovery strategy could help Canada better protect the habitat of bees and butterflies, according to the Canadian Wildlife Federation. File Photo/Rocky View Publishing

With bees and butterflies facing extinction around the world, the Canadian Wildlife Federation (CWF) is calling for the creation of a national pollinator recovery strategy – an action plan that would establish habitat restoration projects throughout the country’s parks, rights-of-way and other green spaces.

“They help with a big chunk of our food source,” said Kendall Bampton, with the City of Airdrie’s urban forestry crew. “That’s been a big issue around the world, as they’re becoming threatened due to pesticides and other things.”

Last summer, Airdrie – which was named Canada’s 23rd official Bee City in April – hosted an urban beekeeping pilot project, according to Bampton. A beehive was operated on City property, she said, and residents were encouraged to visit Open Hive Days, where they could learn more about the project and its benefits.

“That rolled into this year, where we had the urban beekeeping pilot project on private property,” Bampton said. “We wanted to get it out into the community, as well.”

The City also hosted beekeeping training sessions in the spring, she added, allowing those interested in apiculture to find out more and learn what kinds of opportunities are available to them within the municipality.

“We also have a couple of orchards throughout the city, as well, with different apples, plums, cherries and pears, as well as Saskatoon and honey berry bushes,” Bampton said. “Those provide habitats and different food sources for all the pollinators, as well.”

The orchards not only benefit local pollinators, she noted, but also residents – as the pollinators make use of the habitat, they produce fruit for locals to enjoy.

According to Bampton, residents are enthusiastic about the projects. The City has hosted education forums, including a talk at the Airdrie Farmers’ Market and a walk through Nose Creek Park, to give residents a better idea of which plants and flowers are pollinator-friendly. She said the response has been positive.

“There’s definitely interest from people wanting to plant the right annuals and perennials in their yards, so it’s just about us getting the word out there through education,” she said.

Another helpful tip for residents looking to make their properties more pollinator-friendly, Bampton added, is to provide a water source. For bees and butterflies, their small size means finding a safe place to drink can be a challenge.

“That’s a big thing to help them out, so they’re not going and looking for pools and hot tubs and whatnot, then getting in there and maybe not living,” she said, suggesting residents consider installing a shallow dish with rocks where the pollinators can rest while they access the water source.

The City also protects its pollinators through less-direct initiatives, as well. According to Bampton, Airdrie’s integrated pest management plans aim to keep pesticide spraying as low as possible and tend not to spray during periods of high yields, to ensure pollinators are able to do their jobs.

“We like to reduce the use of pesticides where we can – like maintaining our turf in other ways, instead of going right to the chemical route,” she said.

CWF is currently asking Canadians to sign a petition to the federal environment minister proposing the development of an action plan to address concerns surrounding the protection of pollinators across the country. For more information, visit banwithaplan.org

“The food is the main thing,” Bampton said, “and then along the way, it’s beautification at the same time – encouraging more plants and flower species within our community.”