After a few hiccups surrounding the launch of Airdrie-based app rnnr.shop, the founders have been working diligently to continue growing the start-up, which aims to support convenience and local business.
Jun 10, 2021 4:00 PM By: Jordan Stricker 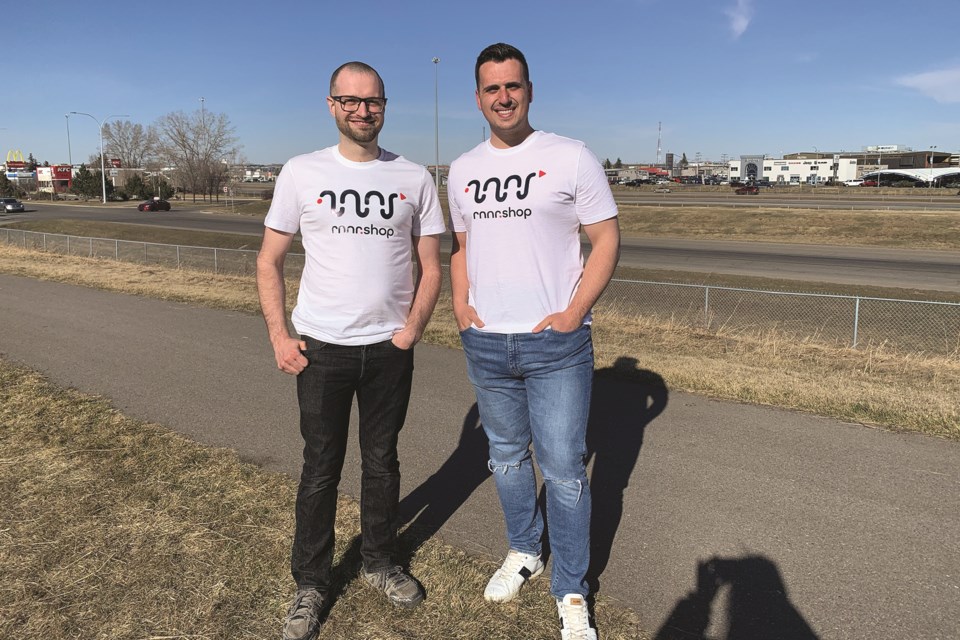 Anthony Morvillo (right) and Andrew Koenig (left) had a strong showing at a competition based around supporting start-up businesses where they made it to the third round, beating out arounnd 40 businesses. Photo Submitted/For Airdrie City View

After a few hiccups surrounding the launch of Airdrie-based app rnnr.shop, the founders have been working diligently to continue growing the start-up, which aims to support user convenience and local business.

“During the initial launch, we were available on Google Play, but we weren’t approved for Apple’s App Store,” Anthony Morvillo said. “We have to redevelop quite a bit of it.”

Although the omission from the app store was admittedly a setback, it didn’t stop Morvillo from continuing to gather information and move ahead with the app’s soft launch in Airdrie earlier this spring.

The rnnr.shop app, created by Morvillo and his partner Andrew Koenig, has a similar function to Skip the Dishes, but includes items other than restaurant food. People who visit rnnr.shop, if they are located in Airdrie, can shop through the app and receive a wide range of delivered items, from furniture, groceries, video games, household items to auto parts. The items are purchased from big box stores in Airdrie and delivered to the shopper’s door in as little as an hour.

The app has been a seven-month work in progress for Morvillo and Koenig, who lives in Calgary.

“We have been collecting data, we are working on the redevelopment and after we will relaunch it,” he said. “People are still buying in and making orders. There is something here.”

The idea for rnnr.shop came after Morvillo experienced a hiccup while preparing Christmas dinner last year, when he found himself in need of a meat thermometer for the Christmas turkey but was unable to leave his kitchen to go buy one.

“Like most people, all my holiday shopping was done online,” he said. “I knew I could purchase one from Amazon, but I needed it to arrive immediately. I would have paid any delivery fee to get it within the hour.

“I was annoyed that I could get a soggy Big Mac with Skip the Dishes within 15 minutes, but not a meat thermometer.”

Clearly, the idea has clicked with some people, as Morvillo was recently a part of a contest hosted by Michele Romanow, a co-star of the television series Dragon's Den. The contest, called The Pitch, is centred around discovering and funding start-ups with potential, with the winner taking home $25,000.

Morvillo made it to the third round before ultimately not securing enough votes to move onto the semi-finals. Although his app didn’t win the contest, he said he was happy he had the opportunity to pitch his product to Romanow.

“We beat out around 40 other companies, which is great,” he said. “We got a lot of publicity from it and now a lot more people know who we are.”

As the duo continue to redevelop and add to their app, Morvillo said he wants to continue to build it with a focus on Airdrie customers and stores.

“We are going to continue to fulfil orders,” he said. “We are going to keep pushing, we aren’t going to give up. Things are looking good – we are just asking for people to be patient with us.”