Local competitors and projects shine at 4-H on Parade

There’s a lot of agricultural talent in Rocky View County. Local youth won big at 4-H on Parade, a competition and show with more than 500 members from about 40 clubs, held at the Calgary Stampede Grounds, May 28-30.
Jun 1, 2010 12:00 AM By: Airdrie Today Staff 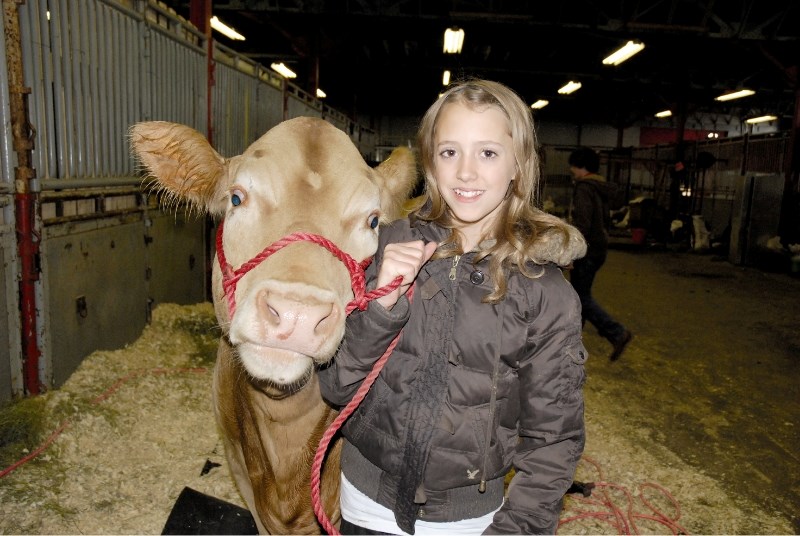 Rachel Drake of the Irricana Beef &amp;amp; Multi Club won Grand Champion Overall Steer at the 4-H on Parade show at the Calgary Stampede grounds, May 28-30.

There’s a lot of agricultural talent in Rocky View County.

Local youth won big at 4-H on Parade, a competition and show with more than 500 members from about 40 clubs, held at the Calgary Stampede Grounds, May 28-30.

Rachel Drake, 12, of the Irricana Beef & Multi Club won Grand Champion Overall Steer for her Charolais-cross, which weighed in at an impressive 1,288 pounds.

“I am thrilled to have won,” said Drake. “Not many juniors get the chance to win Grand Champion Overall.”

Drake, who lives on a farm just outside of Kathyrn, was responsible for feeding, walking, showing and grooming her animal.

Despite the responsibility, she had fun.

“I find it thrilling to have a steer, because you can make a soul mate out of him,” she said, adding that this is the second year she has raised an animal.

Drake said her steer won because of his weight and looks.

“He has a great loin and a clean front end,” she said. “He’s got a lot of good muscle on him, that’s why people love him so much.”

“It feels pretty good,” said McCallum. “This is my seventh year in 4-H, and my first time winning.”

This year, which will likely be her last, McCallum’s experience helped her choose the winning lamb.

“I took more time picking my lambs out this year,” she said. “I just put a lot more time and effort into it.”

McCallum spent about two hours cleaning, feeding and walking her lambs every day.

She says it is worth it as she has learned responsibility, management and other life skills.

Cameron Olson, 17, of the Balzac 4-H Beef Club, was the first in many years to show hogs at 4-H on Parade, which is Canada’s largest 4-H event.

Although his three Duroc-cross hogs were not judged at the event, they were quite popular.

“They were on display as a project,” said Olson. “I really enjoyed raising them, they were a lot of fun. They are very dynamic, interesting animals to work with.”

By raising the hogs, Olson was returning to Alberta’s 4-H roots as many of the first clubs in the province were hog clubs. However, there haven’t been hogs at the event for many years.

Olson is hoping that at least five members from three different clubs will raise hogs in the coming years, allowing for judging.

However, he cautions the animals aren’t for every member.

“They are a project for older, intermediate or senior members,” said Olson. “They can be very aggressive. They are definitely not an animal for small children.”

4-H on Parade is the culmination of a year’s worth of time and effort put into a variety of projects by Calgary area youth. This year’s event included cattle and dairy shows, sheep shows, canine events, light and heavy horse events, art and photo competitions and a live sheep and cattle auction.