Limited Remembrance Day ceremony to be held at cenotaph

The COVID-19 pandemic has forced the Airdrie branch of the Royal Canadian Legion to find a creative way to honour the sacrifice of Canada’s military personnel this Remembrance Day.
Oct 29, 2020 7:00 AM By: Ben Sherick 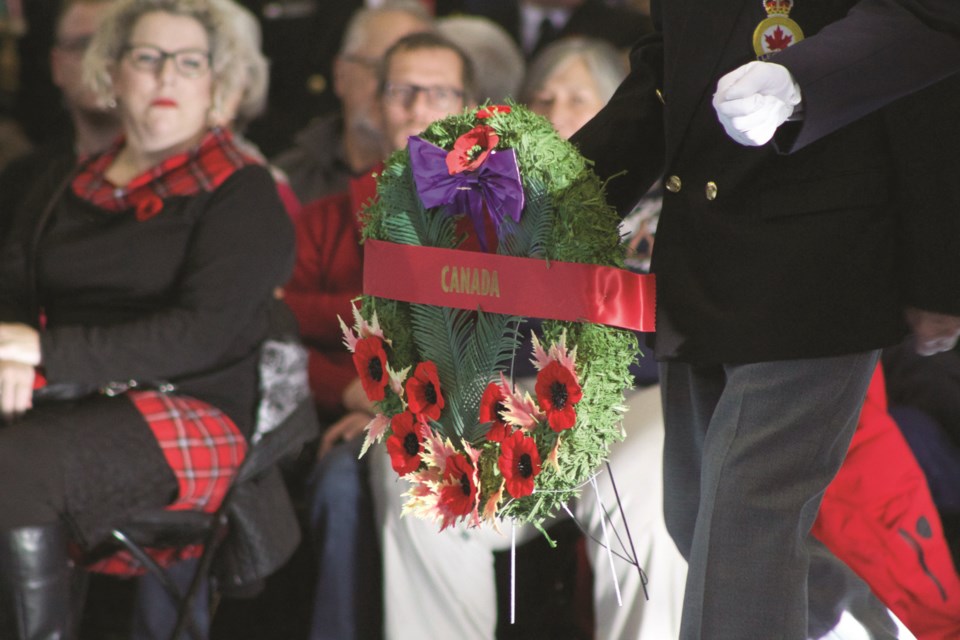 Due to COVID-19, a Remembrance Day ceremony will not be held at Genesis Place Recreation Centre this year. Instead, a small service will be held at the cenotaph and a pre-recorded ceremony will be made available online. File Photo/Airdrie City View

The COVID-19 pandemic has forced the Airdrie branch of the Royal Canadian Legion to find a creative way to honour the sacrifice of Canada’s military personnel this Remembrance Day.

According to Bill Drummond, First Vice President of Royal Canadian Legion 288, two Remembrance Day services will be offered this year in lieu of the annual ceremony normally hosted at Genesis Place Recreation Centre. A short, limited-capacity service will be held at Airdrie’s cenotaph near the Town and Country Centre Nov. 11, while a longer pre-recorded ceremony will be available to stream online.

“The world’s a different place from last year, for goodness sake, never mind before,” Drummond said. “But we shall overcome and I’m sure somewhere along the line, we’ll get back to what we used to call normal. In the meantime, we have to live with what we’ve got.”

According to Drummond, 1,500 people attended last year’s Remembrance Day ceremony. With current public health restrictions, a ceremony of that magnitude is simply not possible this year.

The outdoor service at the cenotaph will be limited to 100 people, Drummond said, including those involved in the ceremony. Tickets for the ceremony are available to veterans and Legion members and can be secured on a first-come, first-served basis at the Legion. An area around the cenotaph will be roped off and two City of Airdrie peace officers along with Legion volunteers will enforce the limited capacity.

Because of the condensed duration, Drummond said the Legion will limit which elements of the Remembrance Day ceremony are included. For example, wreaths will be pre-laid to limit possible transmission of the virus and keep the ceremony short.

The playing of the Last Post and Reveille, which Drummond said were “an integral part of the service,” will be prerecorded. There will be some brief addresses made, he said, but readings of the poem In Flanders Fields and a roll call of local fallen will be limited to the virtual ceremony.

“We’re going to include as much as we can, keeping in mind that we have to limit the timeframe,” he said.

The virtual service, meanwhile, will resemble past Remembrance Day ceremonies and will include everything that would normally take place at Genesis Place, Drummond noted.

The pre-recorded ceremony – which will be available on Youtube, although Drummond was unsure which channel – is being produced by Bert Church LIVE Theatre, which has stepped forward to fill the role as a type of host. Chris Stockton, artistic producer with BCLT, said the elements of the virtual ceremony are currently being recorded at the theatre.

“If this is something we can do for this year to help Canadians reflect, then I’m glad we’ve been able to contribute. It pales in comparison to the contribution [of] our men and women in the services,” he said.

Because the virtual ceremony was put in motion so early, Stockton said there has been some flexibility in recording the different segments of the service.

The virtual ceremony will be distributed to local schools prior to Remembrance Day, Drummond added.

Drummond said it is disappointing to not hold the full Remembrance Day service this year, but the legion had the difficult task of finding a balance between honouring the memory of Canadian soldiers and keeping the community safe and healthy.