A devastating garden pest has been found in Rocky View County and green thumbs want to create awareness.
Jul 13, 2010 12:00 AM By: Airdrie Today Staff 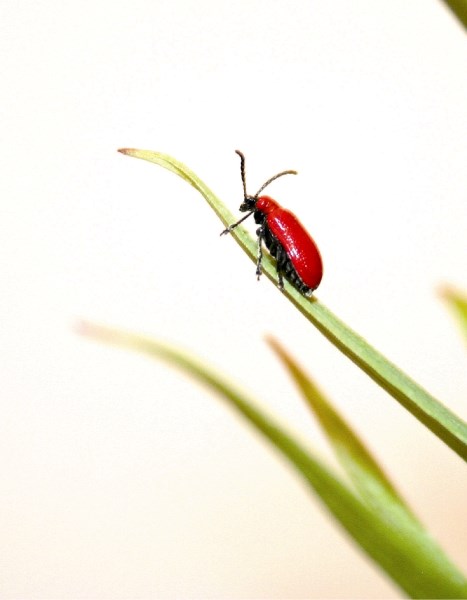 The Lily Beetle may look innocuous, but it is wreaking havoc on lilies in Rocky View County and beyond.

A devastating garden pest has been found in Rocky View County and green thumbs want to create awareness.

Ken Fry, an entomologist and coordinator for the environmental horticultural program at Olds College, is involved in a project that is monitoring the spread of the red lily beetle Lilioceris Lilii (Scolpoli), an insect that devastates lillium and fritillaria species.

The Alberta Association of Colleges and Technical Institutes and the Alberta Regional Lily Society are funding the project, which is in its second year.

“What we are doing is trying to set up a data base to determine its rate of spread,” said Fry, adding the bugs were first discovered in Airdrie in 2004, and were likely brought in on lily material originating in Ontario.

Since then the beetle, which is native to Europe and Asia, has spread south to the southern edge of Calgary and west to Cochrane. Unconfirmed sightings have been reported as far north as Red Deer.

The project relies on gardeners monitoring and reporting the beetle.

The adult beetle is bright red with black legs, head, antennae and undersurface. Several times a year, adults lay orange eggs. The larvae resemble slugs as they cover themselves with their own excrement to repel predators.

If uncontrolled, the beetle will completely defoliate and potentially kill lilies, such as Asiatic, Oriental, Easter, Tiger and Turk’s Cap and Fritillaria.

Currently the beetle has no predators, although a predatory wasp is now being released in Eastern Canada in hopes of controlling the insects. The wasp may be released in the west in several years.

Most pesticides have very little effect on the insects.

“It is an insect that has no specific natural well-adapted enemies…and an abundance of species,” said Fry. “There is precious little that is holding it back.”

Both the adults and the larvae voraciously eat all leaves within reach and then turn to the flower buds.

According to Fry, if uncontrolled, the beetles could devastate the local lily population.

“It is a challenging beast,” said Fry. “My suggestions are to be vigilant to pick the adults in the spring before they lay the eggs and to squish the eggs and larvae.”

Fry said he is grateful for local residents working with him to report the bugs.

Judy Cahoon, a well-known gardener and Airdrie resident, is working on the project.

Her memorial garden, located on the edge of Nose Creek in Waterstone, is home to more than 50 lilies.

Her garden has fallen prey to the nasty bugs since 2005.

To control their spread and save her lilies, she spends an hour every day patrolling for the adults, larvae and eggs.

She sends her handpicked samples to Fry each week as part of his study.

Cahoon’s goal is to create awareness and stop the insects from further devastating area lilies.

“Some people say…let them eat all the lilies, but that is not the solution,” said Cahoon. “The population gets to be massive.”

She added that no matter how vigilant she is, she keeps finding the beetles and larvae, because the insects are strong flyers that invade from neighbouring lily patches.

Despite the adversity, Cahoon won’t give up on one of her favourite flowers.

“I just can’t let the bugs destroy my lilies,” said Cahoon. “So I will persevere.”

To learn more about the lily beetle, visit www.arls-lilies.org

To report a sighting, email Adam Yakabuskie, of the Alberta Regional Lily Society, at lilybeetle@arls-lilies.org or contact Fry at lily_beetle@shaw.ca