Residents of Langdon are banding together to demand the province approve a high school for their growing community, and ensure students can stay in the hamlet instead of being bused to Chestermere for grades 10 through 12.
Oct 2, 2018 12:01 AM By: Airdrie City View 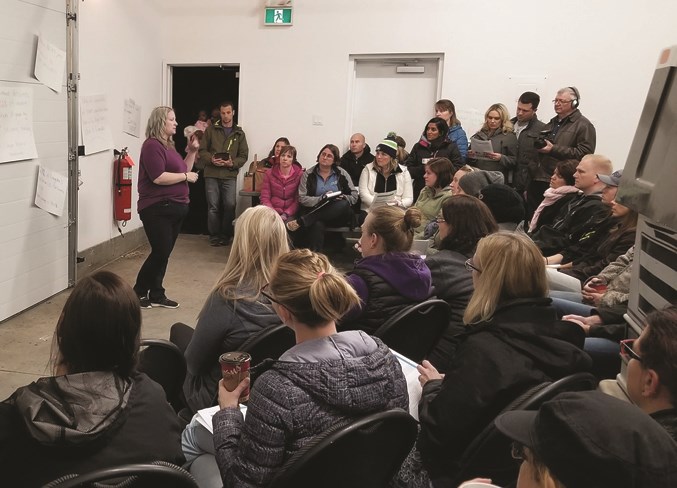 Chrissy Craig, chair of the Langdon Community Association, spoke to residents who gathered for a rally Sept. 23 to protest the provincial government&#8217;s decision not to approve a high school for the hamlet.

Residents of Langdon are banding together to demand the province approve a high school for their growing community, and ensure students can stay in the hamlet instead of being bused to Chestermere for grades 10 through 12. “Right now, [Chestermere High School] is over 90 per cent [capacity] for this year,” said Chrissy Craig, chair of the Langdon Community Association (LCA). “Next year, it’s projected to be at 101 per cent. Schools are told they are over capacity when they are at 80 per cent. “I have a child in Grade 5 and when she was born, I didn’t have to worry about this high school. We’re now getting to the point that if this high school isn’t approved in the next year, she will be going to high school in Chestermere. I didn’t think I had to worry about this.” Even if a Langdon high school was to be approved in the next six months, Craig said, by the time it opened in 2023, Chestermere High would be at 130 per cent capacity. “That’s 30 per cent more kids than are already there. They already have classrooms in the hallways, because there’s not enough space,” she added. Rocky View Schools (RVS) placed the high school in Langdon at top priority when it submitted its capital budget request to the province in October 2017, but when new schools were announced in March, the division was left entirely off the list. As chair of the LCA, Craig also sits on the board of the North Bow Facility Board, which is working with Rocky View County (RVC) and Rocky View Schools (RVS) to build a recreation centre in Langdon, co-located with the proposed high school. Design and construction of the recreation centre can’t begin until the high school is approved, Craig said, because the community plans to share many of the costs and amenities, such as libraries and gyms. The land allocated for the high school and recreation centre has already been prepared for construction, Craig added, including the installation of deep services. “We’ve spent $7.6 million and the land is absolutely ready. They could build tomorrow on that land,” she said. “The services are in. The roadway is in. The parking lot for the quads [baseball diamonds] is in. All it needs is a school.” The purchase of the land was funded by RVC and through community fundraising. Installation of the deep services was paid for by RVC and RVS. Education Minister David Eggen said his government was “playing catch up after years of neglect by the previous conservative government,” but did not indicate specifically why Langdon was left off the list of funded and unfunded capital projects for this year. “We work directly with school boards across the province to determine which schools are needed the most by looking at their capital plans to determine their priorities,” he said in an email to the Rocky View Weekly. But according to Craig, she was told by Eggen’s assistant Langdon was omitted from the capital projects list because RVS didn’t provide enough information in its request. This is a comment RVS Board of Trustees chair Todd Brand said he finds surprising. “We have never been told that our information was insufficient. The bottom line is, our information was as completely sufficient as it could possibly be required,” he said. “I’m curious on that response, because I have not heard that from the ministry at any point.” Area Coun. Al Schule is putting his support behind the residents, asking them to write to Eggen to voice their concerns. “As a resident of Langdon, I care about this issue, and as a councillor, I know how much money, time and effort the County has put into the joint-use site,” he said. “RVS division has Langdon as a priority one and is completely on board with the importance of this high school. Now, we need to pressure the provincial government to do the right thing.”