Funding details for the 40th Avenue bridge and highway interchange in Airdrie were announced Oct. 15.
Oct 15, 2020 5:45 PM By: Scott Strasser
Previous Next
Alberta Premier Jason Kenney was in Airdrie Oct. 15 to announce $21.1 million in provincial funding for the 40th Avenue and Highway 2 interchange. Photo by Scott Strasser/Airdrie City View.
Expand

The government of Alberta has committed up to $21.1 million towards the construction of a long-awaited bridge and highway interchange.

Alberta Premier Jason Kenney was in Airdrie Oct. 15 to announce funding details for the 40th Avenue bridge and highway interchange. He was joined by representatives from the provincial government and City of Airdrie.

“As part of Alberta’s recovery plan, Alberta’s taxpayers are investing up to $21.1 million to help build an interchange at Highway 2 and 40th Avenue here in Airdrie,” Kenney said. “This project will include building a bridge at 40th Avenue over the Queen Elizabeth II Highway (QEII), as well as access ramps.”

At the presentation, Kenney announced the total cost of the project would be $83 million. Mayor Peter Brown later clarified the project’s total cost is estimated at roughly $65 million, with an additional $10 million required for land acquisition. The City is responsible for funding about $45 million, he said.

After the announcement, Brown said the City will pay for its portion through a combination of borrowing, levies, the Municipal Sustainability Initiative program and reserve funds. He added the City will continue to lobby for support from the federal government as well.

“The Province was kind enough to provide a letter of endorsement for us to solicit matching federal funds, so we can look at an additional $20 million,” Brown said. “We’re working with an organization that [is] a lobbyist group out of Edmonton, and they’ll be working with us to hopefully secure that $20 million.” 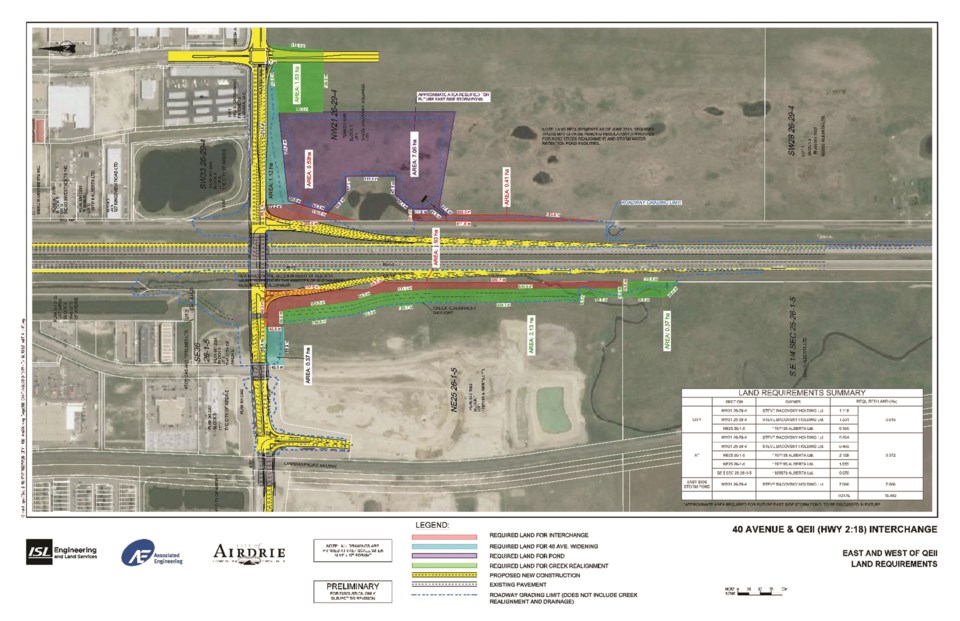 The detailed design of the 40th Avenue interchange includes a bridge over the Queen Elizabeth II Highway as well as on-and-off ramps. Photo: City of Airdrie.

Building the bridge and interchange will create 300 direct and indirect jobs, according to Kenney, who added construction is slated to begin in either 2021 or early 2022. He said the interchange should take two to three years to build and should be driver-ready in 2024.

Due to Airdrie’s rapid expansion and population growth in recent years, a third highway bridge and interchange connecting the east and west sides of the city has long been a priority for the City of Airdrie. For years, the City has lobbied the provincial and federal governments for funding support.

“In short, this one-time railway town is growing into a major urban hub in southern Alberta,” Kenney said. “Every day, about 85,000 vehicles travel up and down this stretch of the QEII, around 40th Avenue. Getting onto the off-ramp during rush hour can sometimes be a nightmare. Drivers end up in gridlock, so a commute that should take half the time and be fairly easy with a cup of coffee…is sometimes something for drivers to dread.”

During the announcement, other elected officials including Brown, Minister of Transportation Ric McIver and Airdrie-East MLA Angela Pitt touted the positive impact the completed interchange will have on Airdronians’ quality of life.

“More Albertans and new Canadians are choosing Airdrie as the place they’d like to live, work and raise a family,” Pitt said. “Many have also chosen to live in Airdrie as they work in Calgary. This has brought two results. The first is a growing, prosperous, economically vibrant Airdrie that is family-friendly with an incredible community spirit.

“The second is traffic. Anyone who lives in Airdrie knows and recognizes traffic jams in the morning and evening rush hours, as drivers get on and off the QEII. This congestion has cost us, not only in terms of time, but it presents safety concerns for residents.”

The announcement came 10 days after Airdrie City council received a report indicating the completion of the interchange would help facilitate future residential and commercial development within the city, with long-term economic returns in the billions of dollars.