The Airdrie Fire Department has released details of a vehicle fire that occurred Aug. 28 on Summerfield Boulevard. According to Deputy Fire Chief Garth Rabel, crews responded to a 911 call around 2:15 p.m.
Sep 1, 2020 10:00 AM By: Ben Sherick 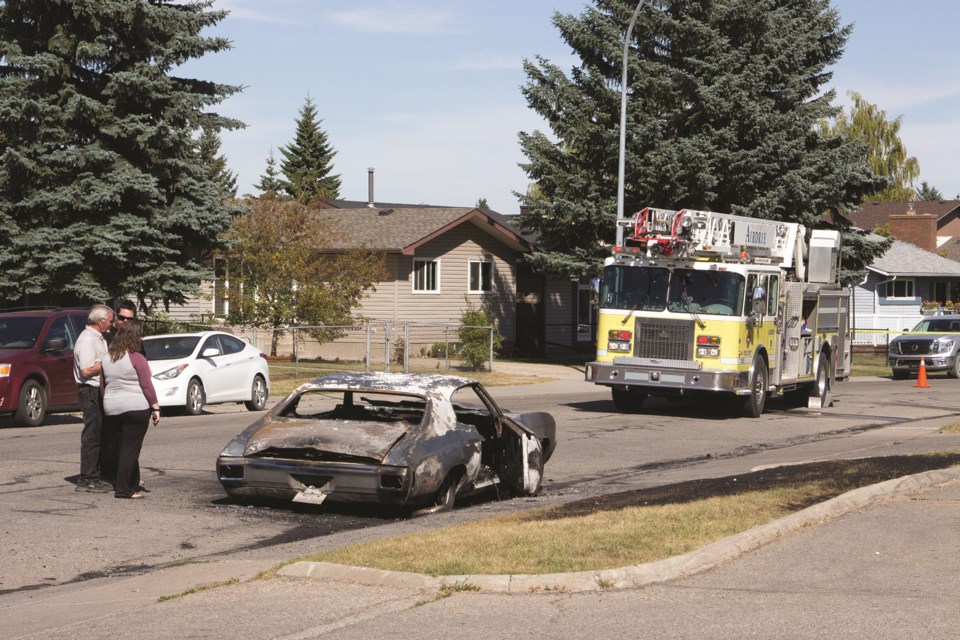 The Airdrie Fire Department (AFD) has released details of a vehicle fire that occurred Aug. 28 on Summerfield Boulevard.

According to Deputy Fire Chief Garth Rabel, crews responded to a 911 call around 2:15 p.m.

“On arrival, fire crews found a fully restored, late model car fully engulfed in flames on the side of the busy roadway,” an AFD press release stated.

Rabel added the fire sent a plume of smoke high into the air, which could be seen from as far east as Kingsview Boulevard.

According to Rabel, an adult driver and two child passengers were travelling in a 1971 Chevrolet when smoke began emanating from the vehicle. Everyone safely escaped from the vehicle, which was quickly overtaken by flames.

The adult and two children were assessed by Alberta Health Service paramedics, the press release stated. No one was injured in the incident.

The fire completely destroyed the car, and damage from the incident has been estimated at $35,000.

According to Rabel, the cause of the fire has not yet been determined.

“As far as exactly what occurred, the Fire Prevention Bureau continues to investigate to see if they can determine the cause of why the vehicle did start on fire,” Rabel said.

Three pieces of fire apparatus and eight firefighters responded to the incident.

During the response, Rabel said he noticed several people stopping to take videos and photos of the fire. The incident serves as an important reminder that in the case of any emergency, the public should give first responders – firefighters, police and paramedics – adequate space to work.

“It’s just not safe,” he said. “Not only the burning vehicle…but there’s also a big plume of smoke that went up in the air. We don’t know what’s in that smoke. Before first responders get there, people need to step back, stay back and protect themselves.”