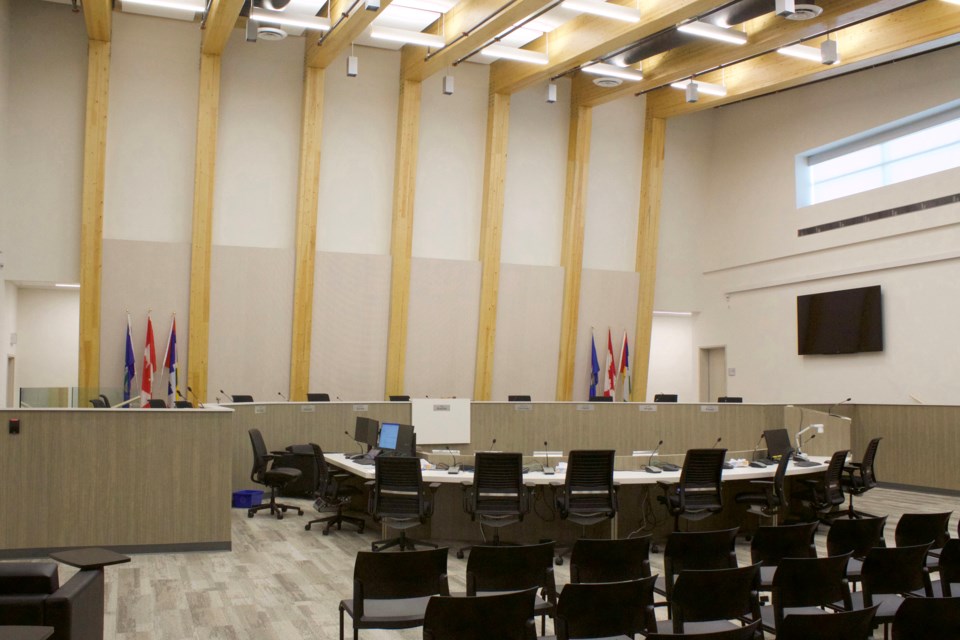 Early in the meeting, Deputy Reeve Al Schule moved to remove a notice of motion by Couns. Kevin Hanson, Samanntha Wright and Crystal Kissel from the agenda.

The notice of motion, presented in the meeting’s agenda package, would have directed RVC administration to develop a new policy for the hiring of a Chief Administrative Officer (CAO), based on feedback from RVC’s legal counsel and the Alberta Ombudsman regarding the “irregular” process followed in the recruitment of current CAO Al Hoggan.

When pressed by Kissel for a reason for his motion, Schule said administration was already working on a policy and therefore the notice of motion was redundant.

“Administration may be working on it, but who gave that directive?” asked Wright. “It wasn’t a directive of council; we don’t have a motion that states anything like that.”

Boehlke said he had mentioned to Hoggan, “perhaps we could have, not a policy but a procedure that we could hand off to the next council, and bring it to council at some point in the future.”

“The other reason, quite frankly, is there’s been some allegations of a breach of confidentiality on this item, and I don’t believe we’re going to go forward and talk about that in public right now, but that’s the reason,” he added.

“I didn’t realize the direction of one councillor put administration into any form of motion,” Wright said, at which point Boehlke shut down the debate, causing her to challenge the chair.

“This is not how this goes down. We’re allowed to debate this. If you don’t agree with me, you can ask me to be quiet, you can ask me to finish, but you still have to hear from the remainder of council – otherwise, we have not debated this properly.”

Boehlke asserted RVC’s procedure bylaw allows the Chair to limit debate, effectively ending the discussion. Council voted 6-3 to remove the item from the agenda, with Hanson, Kissel and Wright opposed.

The episode prompted Hanson, Kissel and Wright to send a Letter to the Editor, published May 7 in the Rocky View Weekly, outlining concerns about what they termed to be an “unprecedented hijacking of process.”

“We completely recognize that in a democracy, majority rules,” they wrote. “However, when the majority places its own interests above the people as a whole, it becomes the ‘tyranny of the majority.’ Good governance requires a respect for the spirit of democracy and healthy debate, not censorship and manipulated discussion.”

According to Hanson, the three councillors were concerned the notice of motion was not allowed to be presented.

“We took exception to that and felt we were being censored,” he said.

However, Boehlke said the reason for the removal of the item “will come out in the future,” reiterating it amounted to a breach of confidentiality. He also called the assertion that a two-thirds majority of council had gone “rogue” was “foolishness,” and suggested the letter was a breach of council’s code of conduct.

“When council makes decisions, you go on to the next issue – you don’t go running to the paper and write letters and get to the blogs,” Boehlke said. “Unfortunately, this group has decided they’re going to be controversial.”

While Boehlke said the situation was concerning, he still feels council has been able to work together despite differences to do “good things for the taxpayers of RVC.”

Hanson agreed debate is important – “the root of democracy,” he said – but added council has a responsibility to ask hard questions in order to ensure its decisions leave the County on a good path in the future.

In their letter, the three councillors maintained a CAO hiring policy was needed. The CAO is council’s sole employee, and RVC currently does not have a policy in place to recruit for the position. As outlined in the letter, the irregular process used to recruit Hoggan to the position led to the, “four of us [hiring] independent legal counsel and [sending] a letter to Municipal Affairs outlining our concerns.”

“Council later learned that some RVC residents also sent a similar letter to the Alberta Ombudsman. Responses to both letters recommended that council should create a CAO hiring policy, as soon as possible,” the letter continued.

During the April 30 meeting, Boehlke indicated the policy administration was working on would be presented alongside amendments to the procedure bylaw, although he did not indicate a timeframe.