The Meadowlark Trail – a proposed recreational walking trail connecting Beiseker and Irricana – took a step closer to becoming a reality after Rocky View County (RVC) council redesignated a former railway at a regular meeting Sept. 25.
Oct 9, 2018 12:01 AM By: Ben Sherick 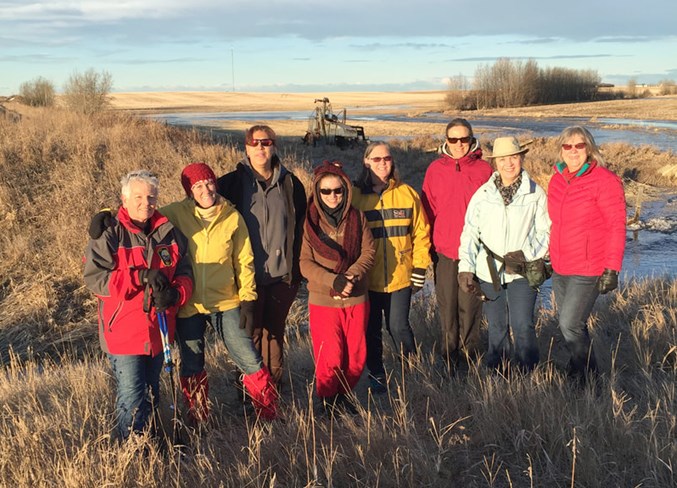 Members of the Meadowlark Society stand along a portion of the future trail connecting Irricana and Beiseker. The land received redesignation approval at a Rocky View County council meeting Sept. 25, putting the trail one step closer to becoming a reality.

According to planner Stefan Kunz, “the intent is to establish a policy and land use framework that would allow for the future construction of a trail within the former CP Rail right-of-way between the town of Irricana and the village of Beiseker.”

The land, which Kunz said was donated to the applicant, Alberta TrailNet Society, in 2005 for the purpose of developing a 10-kilometre trail, comprises 77.28 acres held in 12 separate titles. The proposed trail would feature three road crossings and two creek crossings, and would pass below an existing bridge owned and maintained by CN Railway. According to Kunz, the Meadowlark Trail Association – a group of local landowners – will be involved in the promotion, development and maintenance of the proposed trail.

He added the trail is intended to connect to The Great Trail, a Trans-Canada Trail network stretching from coast to coast.

“As the site is currently undeveloped and unregulated, instances of trespassing, dumping, access by motorized vehicles, off-leash pets and other undesirable uses have occurred, resulting in conflict with neighbouring landowners,” Kunz stated in his report. “Through the development, maintenance and monitoring of the site as established in the conditions of the proposed DC bylaw, the applicant intends to mitigate these potential conflicts.”

Based on letters submitted to the County, the proposed trail has been generally well-received. Kunz said RVC received 105 responses after circulating the application to 69 adjacent landowners, with 96 in support and nine opposed. Those positive sentiments were reinforced at the public hearing.

However, the application was opposed by some area landowners. Resident Matthew Fasoli, speaking on behalf of 15 adjacent landowners, noted concerns about emergency access to the trail for first responders, current limited parking availability near the site, the need for fencing to separate trail users from nearby agricultural practices and the need for crossing agreements allowing local farmers to access fields on both sides of the trail.

“I think, fundamentally, the concept of the trail is a great idea, but we can’t put this forward without these issues being addressed,” he said.

Linda Strong-Watson, executive director of Alberta TrailNet, rebutted the opposition, stating the land has not yet been developed as a trail and many of the concerns would be dealt with directly through a development permit. Additionally, she said, access agreements are available for adjacent landowners who wish to cross the trail for agricultural purposes.

Reeve Greg Boehlke – who gave up his chair to Deputy Reeve Jerry Gautreau in order to act as the area councillor – expressed his support of the application and the proposed trail.

“I really hope that some of the issues do – and I know they will – get addressed, and this will turn out to be a good asset in that region that is starving for something to do for people in recreation,” he said. “I really hope that this turns out to be something that bonds…Beiseker and Irricana, and I know that with council looking at the development permit, we won’t put something through that doesn’t look after the landowners’ interests, as well.”

Boehlke added he would prefer to have council act as the development authority on the project, and his motion to amend the redesignation bylaw to that end was carried unanimously. The amended bylaw then received three unanimous readings. Coun. Mark Kamachi was absent from the meeting.