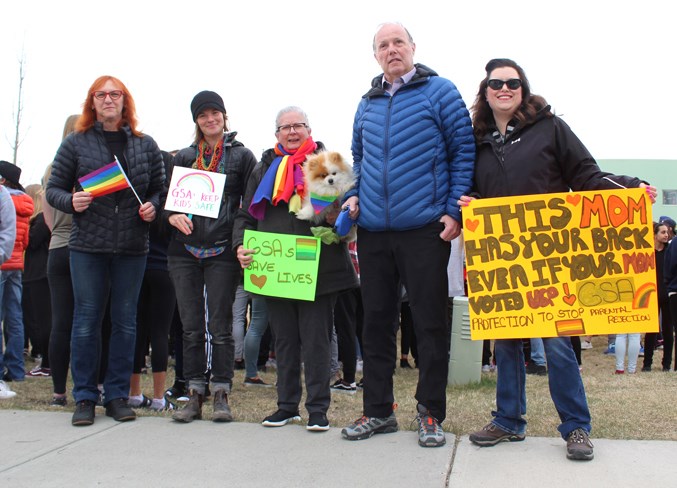 Jessica Salkeld (right) and other Cochrane advocates joined dozens of students in a walkout May 3, protesting proposed legislative changes by the newly-elected UCP government to roll back protections for gay-straight alliances. File Photo/Great West Newspapers

Around 80 Bow Valley High School (BVHS) students spilled out on the front lawn and sidewalk in front of the high school the morning of May 3, joining students across the province in protest of the newly-elected United Conservative Party (UCP) government’s stance on gay-straight alliances (GSAs).

“As a mom supporting these kids, I don’t know how much support they have at home and I want them to know that they have an adult who will support them,” said Jessica Salkeld, holding a sign she made with her two children that read, “This mom has your back even if your mom voted UCP.”

Salkeld was accompanied by a handful of other local advocates, prior to the group of students joining them for the 20-minute walkout during school hours.

“It resonates with me personally – I’m a teacher, I’m queer and I have two little kids,” said Brianna Sharpe, vice-president of local pride society Kindred Cochrane. “These kids are making themselves vulnerable no matter who is in government.”

Former town councillor and longtime human-rights advocate Dr. Ross Watson also took part in the protest, accompanied by his wife and their dog, who sported a rainbow kerchief.

“I was part of a panel that reviewed human-rights legislation – the big question was whether or not human sexuality should be included [in that],” Watson said, adding many of the parents on the panel had lost their children to suicide and it is with these people in mind that he chose to participate in the walkout.

According to a statement Premier Jason Kenney made at a campaign rally ahead of the recent election, the UCP's Education Act "will have the strongest legal protection for GSAs of any province in Canada.” However, the party also announced plans to revert to past legislation, scrapping the NDP’s Bill 24 – which prevents school staff from divulging student involvement in GSAs to their parents.

Peter Guthrie, the newly-elected MLA for Airdrie-Cochrane, said the demonstrations in Cochrane were fuelled by “misinformation” around GSAs and the UCP’s stance.

“I would like to make it clear that our government supports GSAs and we do not support mandatory notification. We believe a child should have a right to their anonymity,” he said.

Kenney has maintained that parent notification would be handled on a “case-by-case basis.”

Students throughout Cochrane joined in the protest, including around a dozen students from St. Timothy High School and approximately 20 from Cochrane High School. According to Angela Spanier, director of communications for Rocky View Schools, all of the district's high schools and most of its middle schools currently run GSA clubs to provide support for LGBTQ2+ students.

"Across the jurisdiction, we had a number of students participated in the student-led walkout,” she said. “The demonstrations were peaceful, with students walking out at 9:30 a.m. and returned to class at 9:50. Although no teachers, nor school staff, played any role in organizing this activity, students who choose to walkout were observed for safety reasons.”

According to one BVHS teacher who spoke to students about the protest, fear is rooted in bigotry – and if kids want to form a club and no harm is caused to others, they should be at liberty to do so.

About the Author: Lindsay Seewalt

Lindsay is a senior Eagle reporter who has transformed her penchant for storytelling into the craft of writing.
Read more