City to participate in development of EPR framework

The City of Airdrie is hoping to shift the responsibility of consumer waste management from Airdrie taxpayers and onto producers, by participating in the development of a provincial policy.
0
Mar 7, 2019 12:01 AM By: Jessi Gowan 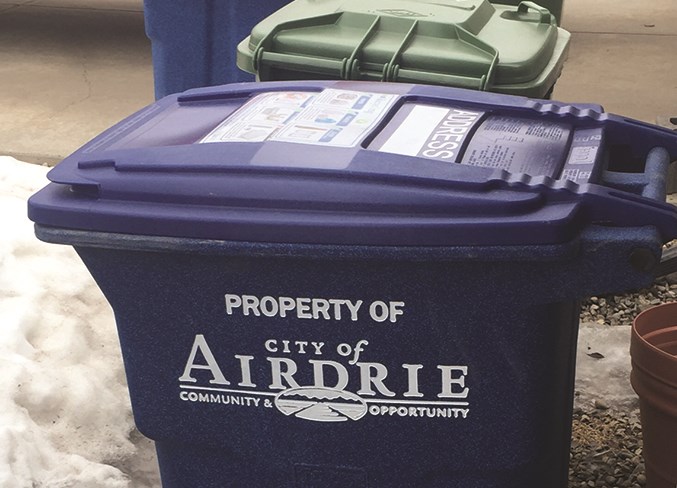 Through its participation in the development of provincial policy, the City of Airdrie hopes to see producers take responsibility for the waste-management costs associated with their products – and possibly make more environmentally-sound choices in the future to save on those costs.

The City of Airdrie is hoping to shift the responsibility of consumer waste management from Airdrie taxpayers and onto producers, by participating in the development of a provincial policy. “Municipalities don’t really have the ability to affect the generation of the waste,” said Susan Grimm, team leader with Airdrie’s Waste and Recycling Services. “Extended Producer Responsibility (EPR) is a concept that looks to move those waste-management costs to producers, who do have the ability to incorporate changes into their products and packaging design to reduce waste.” Grimm presented information about EPR programs to Airdrie City council at a regular meeting March 4, following a vote by City of Calgary council Feb. 4 directing administration to work with other interested municipalities to undertake the baseline research needed for the creation of EPR policy in Alberta. “Every other province in Canada does have one – Alberta and the territories are the only ones that don’t already have this program in place,” Grimm said. “I’ve been in this position since 2010, and since 2010, I’ve been attending regional waste meetings. At that table, probably once or twice a year, we talk about this – how Alberta is the only province that doesn’t have this legislation, and how are we going to do this.” While each province uses a different model for its EPR policy, Grimm said, the cost of the recycling would still likely be borne by the consumer – but through the producer, rather than municipal government. This could be in the form of increased costs to account for future recycling needs or refundable deposit fees charged to the customer at the retail point of sale. “What this could do is force the producers to make a better product that will last longer, so they’re not having to pay to have components and such recycled as frequently,” Grimm said. “Right now, when you buy a big TV, it comes in a big box. And inside of that box is Styrofoam packaging. Some producers are shifting from Styrofoam to cardboard, because cardboard, right now, is a commodity that is revenue-generating. Most places, that Styrofoam is going to the landfill – so you’re taking something that was landfilled and replacing it with something that potentially has market value.” As the EPR program would ultimately be provincial policy, Grimm said, council’s decision just begins a work-in-progress to build a framework that could be the basis for such a program. Throughout the next six to eight months, City staff will partner with the City of Calgary and the Alberta Urban Municipalities Association, as well as producers, to develop this baseline research. “We’ve committed to coming back [to council] in October, for a high-level outline of where we’re at, what we’ve accomplished and how we’re going to move forward,” Grimm said. “I think, ultimately, as a city, our goal ­– and my mandate for waste and recycling – is looking at ways to decrease waste to landfill. By forcing producers to use different, better material or make a better product, we’re working towards that goal, as well.”