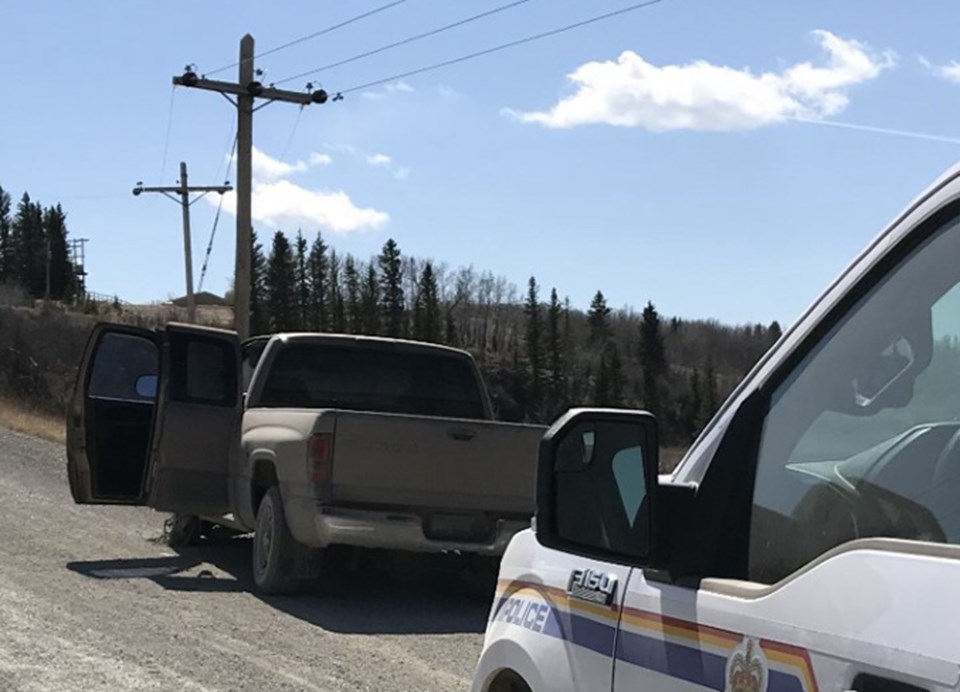 RCMP officers were forced to deploy a tire deflation device April 25 to stop a fleeing vehicle during a police chase on Star Ranch Road, west of Cochrane.

According to a press release from Cochrane RCMP, Nakoda Security notified the detachment April 25 that a suspicious vehicle, which had been reported stolen out of Calgary, was in the area. While the vehicle – a brown Dodge Ram – had left the area before RCMP arrived, police officers eventually located it.

When RCMP attempted to apprehend the Dodge Ram, the driver fled eastbound on Star Ranch Road, according to RCMP. While the officers attempted to follow the vehicle, another truck blocked their path before fleeing, as well.

Eventually, RCMP relocated the vehicle, which still continued to flee from police, and the tired deflation device was deployed. A tire deflation device had to be deployed in order to stop it.

Once the vehicle came to a halt, the two occupants exited the truck and fled on foot. Members of the Police Dog Services, Airdrie RCMP and Cochrane RCMP then arrested the two occupants, according to RCMP.

Brandon Unrau, 23, Karley Rylaarsdam, 30 – whose addresses were not included in the press release – were arrested on multiple charges. Unrau’s charges include flight from police, dangerous operation of a motor vehicle, possession of property obtained by crime, possession of break-in instruments and possession of a weapon for a dangerous purpose.

The occupant of the truck that attempted to block RCMP – Leah Beaver, 39 – was charged with resisting and obstructing a peace officer.

Nearly 20 people were involved in a bus-rollover on the Trans Canada Highway April 27, during the late-winter snowstorm that impacted southern Alberta and wreaked havoc on travelling motorists.

“The bus was travelling from Lake Louise to Calgary and extreme weather conditions were reported at the time of the incident which included high winds and blowing snow,” stated a release from Cochrane RCMP.

The bus had 15 occupants, according to RCMP, several of whom were transported to hospital with minor to serious injuries.

Cochrane RCMP is warning residents about a paving company that offers services, but does not follow through with the promised work after receiving payment.

“The RCMP would like everyone to be aware when people offer services door to door,” a press release from the detachment states. “Check for credentials and reviews, and do not buy services that are not accredited.

The company in question knocks on doors, offering to pave driveways using leftover asphalt at a discounted price, according to RCMP. Victims of the scam told police the company gets started on the work, but leaves before the driveways are completed.

Requests for comments from RCMP regarding these releases were not returned by press time.