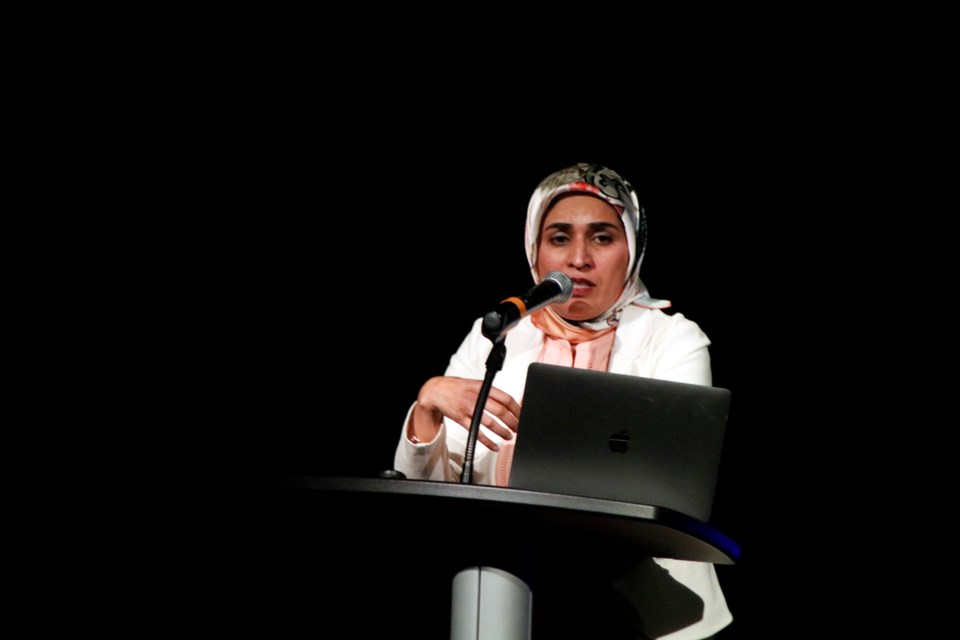 Dr. Fozia Alvi, pictured here giving a lecture to the Rotary Club of Airdrie in May, recently found out she has been nominated for a Nobel Peace Prize. File Photo/Rocky View Publishing.

A local family doctor has been nominated for the Nobel Peace Prize in recognition of her humanitarian work.

That philosophy, and her work with refugees overseas, has secured Alvi a nomination for the prestigious prize, which she said she found out about through an email she was forwarded May 24, confirming the nomination.

Since 2017, Alvi has made two trips to refugee camps in Bangladesh to tend to children, mothers and victims of sexual assault among Rohingya Muslims who have fled Myanmar due to religious persecution. Alvi and her husband recently opened a hospital in Pakistan to increase the sustainability of their outreach.

According to nobelprize.org, there are 301 candidates for the 2019 Nobel Peace prize – the fourth-highest number of candidates ever. The Nobel Foundation does not disclose information about the nominations, and the Nobel Committee does not announce the names of the nominees to either the media or the candidates. According to the website, “in so far as certain names crop up in the advance speculations as to who will be awarded any given year’s Prize, this is either sheer guesswork or information put out by the person or persons behind the nomination.”

In spite of the Nobel Foundation and Nobel Committee’s silence, the email Alvi received has many in the community buzzing. Initially, Alvi said she was honoured by the nomination but not overly excited. Her focus, she said, remains on her cause.

“Honestly, all I care about is the refugees that I’ve worked for,” she said. “My Nobel Prize, of course, is not going to help them, but it will help me to advocate for them more.”

Alvi’s excitement about the nomination did grow, she said, after sharing the news with friends, family and fellow doctors. When she saw how enthusiastically the nomination was received, she said, she started to appreciate it more fully.

Nobel Laureates are chosen, according to the website, by the Nobel Committee through a majority vote at the beginning of October, and are then publicly announced. The 2019 Laureates receive their prize during the Nobel Peace Prize Award Ceremony in Oslo, Norway Dec. 10.

Should she be chosen as a Nobel Laureate, Alvi said she would be honoured, but would be even more excited about the increased awareness for her cause that would accompany the recognition.

In the meantime, the nomination has spurred her to work even harder to help refugees, she said.

“The genocide is still going on, and I think it’s a moral obligation, as human beings, to do something,” Alvi said.