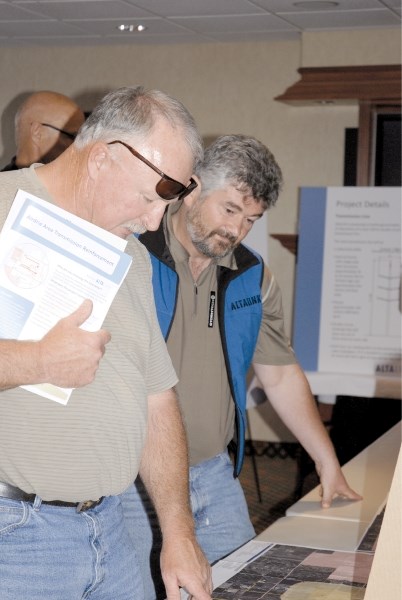 The session was held to obtain public input and provide information on the Airdrie Area Transmission Reinforcement Project, which includes a 240/138-kilovolt substation, a 131-foot high communications tower and about 12 kilometres of 138-kilovolt transmission lines.

The final plan is yet to be determined, but there are two potential substation sites and three transmission line routes proposed.

Construction is slated to begin next spring after public input and other factors including cost, visual, environmental, agricultural and residential impacts are determined.

Lisa Peters, communications advisor for AltaLink,, was pleased with the number of interested residents.

“We have had a lot of questions about the routes.”

All three potential routes run east of Airdrie through predominantly agricultural land. There are several acreage residents in the area.

AltaLink is hoping to determine which route will cause the least impact.

One option is along an existing road allowance, nullifying the need for the standard 20-metre easement, which is a selected area that must be kept clear of trees and other obstacles.

The other options run along private land.

“The road allowance is great because we don’t need easements,” said Niki Harms, right of way planner for AltaLink.

“But it has higher residential impact, so we have included other options.”

Bill Cliffe lives on a 30-acre parcel next to one of the proposed routes.

He expressed concern about the impact to his property value and potential health risks.

“Resale value on my real estate is my main concern,” said Cliffe.

“We were thinking of selling before, and this is definitely playing a role (in that decision).”

Airdrie resident Kevin McPherson was at the open house representing his elderly mother, whose property is directly along one of the proposed routes.

After conducting research, he has determined it would be best to bury the lines, although he is cognizant that the costs may be prohibitive.

He also said there may be other routes, which would cause less impact.

McPherson also raised a concern about the negative impact on his mother’s property value, he cited a report stating they could decrease by up to 40 per cent.

“There is no doubt that we have the need for the upgrading,” said McPherson.

“It is a case of where everyone doesn’t want it in their backyard. Burying the line would be optimal as it takes care of health issues and unsightly lines.”