Alderman Shawn Howard will be soul searching this summer to determine if he will run in the October municipal election. Howard has been on City council for two terms and is weighing his options before deciding if he will run for a third.
0
Jun 4, 2010 12:00 AM By: Airdrie Today Staff 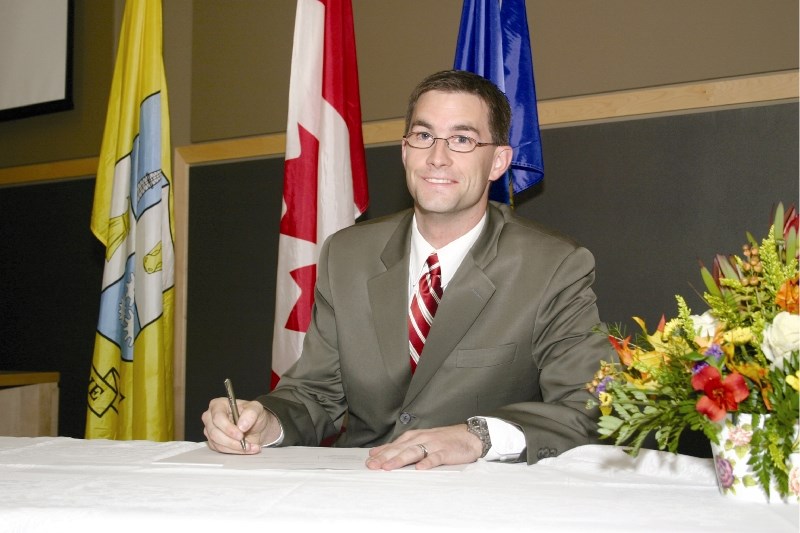 Alderman Shawn Howard signs in after being first elected in 2004. He received more votes than any other candidate in the 2007 civic election, but has yet to decide if he will run again this October.

Alderman Shawn Howard will be soul searching this summer to determine if he will run in the October municipal election.

Howard has been on City council for two terms and is weighing his options before deciding if he will run for a third.

“I’ve had two good terms and been able to work with others to get a number of things done,” he said.

“I know I still have some things to offer but I have to ask myself if I have the time. It is all about balancing your personal life and what you are hoping to accomplish there with your professional obligations. You have to ask yourself, ‘Have I got the fire in my belly to continue doing this community service?’”

Howard worked with the provincial and federal governments for years before joining council in 2004 after “political colleagues” urged him to take on a municipal role.

“I never thought I would see myself working in a municipal setting but I think this is where a lot of the important decisions are made,” said Howard.

“I think most people have the order of importance for governments mixed up. Your local government is the one that touches you the most directly, but people don’t see it as important and they don’t get out and vote. You have to have your voice heard and vote for the candidate that shares your vision and values or it becomes trickier to complain or be surprised if a decision doesn’t go your way. Your local level of government is where you can really have your input.”

Howard said the most frustrating part of his job is the fact that municipal governments must appeal to the Province for funding.

“When you are a local elected official and you see the need right in front to of you, it would be nice to be able to fix the problem without waiting for the Province.”

Howard pointed out the construction of the Highway 2 and Yankee Valley Boulevard overpass as an example of a much-needed project that didn’t come to fruition until it affected the highway, which falls under Provincial jurisdiction.

Howard currently works as a public relations representative with the Wildrose Alliance Party, but says he doesn’t see himself taking the leap into provincial politics any time soon.

“I’ve learned in politics to never say never but I have no plans right now to run provincially, it is not in the tea leaves,” he said.

“It is a huge time commitment to go from being an elected official locally to travelling across the province. I certainly wouldn’t run against (Airdrie-Chestermere MLA) Rob Anderson.”

Along with his political experience, Howard has brought financial expertise to council.

“I have a fairly relentless focus on the bottom line and I urge cautious spending,” he said.

“I tend to ask a lot of questions in advance. I have been fortunate to be able to apply my business experience to my work on council.”

Howard said it has been a pleasure to serve Airdrie for the past six years.

“I have learned a tremendous amount,” he said.

“Hopefully, regardless of what I do in the future, people will look back and say, ‘Shawn was consistent and stuck to his principles.’ I think it is important to stick to and honour the ideals you set out in your campaign and I feel I have done that.”

If he does decide to throw in the towel, Howard says he will miss “being in the know.”

“I like being right in the middle of major decisions that affect the community,” he said.

“It is great to get to see all the different pieces of machinery that make up the City and know you have made a difference in some way.”

Howard chaired the City’s finance committee for four years and sat on it for one. He is also a member of the police committee, the Calgary Regional Partnership committee and the environmental advisory board.

He says he sees economic growth and prosperity for the future of Airdrie.

“We need to decide what we want to be in five or 10 years and do everything it takes to get there,” he said.

“We need to attract more professional office-type businesses so people can work five minutes from where they live. We need to keep on track with sustainability. We have only scratched the surface. There is all sorts of opportunity here that hasn’t been fully tapped. I think Airdrie is only getting started in terms of its potential and what we can be.”

Howard’s advice to any residents who are considering running for council in the fall is to look at the big picture.

“You have to be able to see the long-term picture and vote accordingly.”