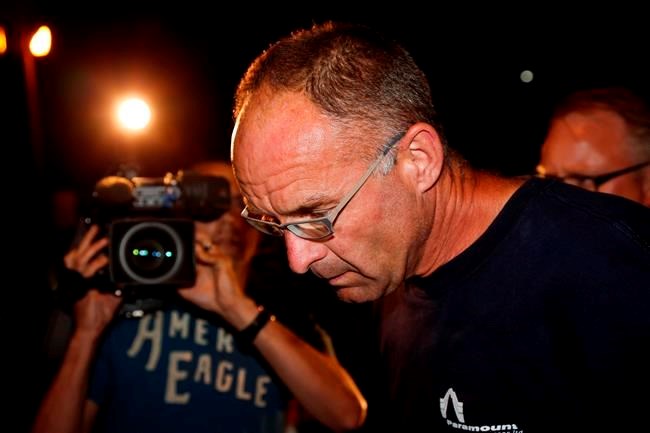 A lawyer for a man found guilty of killing a couple and their grandson has argued that a judge should never have allowed evidence taken from her client's farm because police shouldn't have been there in the first place.

Douglas Garland is appealing convictions of first-degree murder in the deaths of Alvin and Kathy Liknes and five-year-old Nathan O'Brien five years ago.

Garland, 59, is serving a life sentence with no chance of parole for 75 years.

He watched proceedings closely in Alberta's Appeal Court in Calgary on Thursday, but never looked at three rows of the victims' friends and relatives sitting quietly in the courtroom.

Garland's lawyer, Alias Sanders, told court the trial judge shouldn't have allowed the evidence that was gathered after the couple and their grandson disappeared.

The couple and the boy vanished after an estate sale at the Liknes home in Calgary. Nathan was there for a sleepover.

When his mother arrived the next morning to pick him up, she found blood pooling on the floors and spattered around rooms. A child's bloody handprint was on the wall.

"What was lacking was a reason to believe these people were on the farm in order to conduct the search or any indication from the farm that they would be there," Sanders told court.

"The only facets of the evidence that linked this to the farm was the sighting of a truck believed to be Garland's and historic animus that had never come to any kind of violence or threats in the past."

The trial heard that Garland had stewed for years over a dispute with Alvin Liknes about a patent for an oilfield pump they had both worked on. Jurors were told he had also fantasized about Kathy Liknes as evidenced by photos of her found in Garland's deleted computer files.

The victims' bodies were never recovered. Bone fragments, burned flesh, and teeth were found in ash from a burning barrel on Garland's property.

Sanders argued that police detained and questioned Garland, but he wasn't charged initially. Police seized his running shoes and took pictures of injuries he had sustained.

Investigators didn't have a warrant and were searching the farm in the belief that the three victims may have been held hostage there.

"It's indicative of the wide latitude given to the police without regards to the constitutional rights of Mr. Garland."

Sanders also argued the trial judge overemphasized the graphic nature of photo evidence. She said that was prejudicial and undermined the presumption of innocence.

Crown prosecutor Christine Rideout said police didn't violate any of Garland's constitutional rights and there was plenty to link him with the victims.

"Clearly this appellant had a connection to the Liknes family. His sister was married to Alvin's son. Alvin and the appellant had been involved in a business relationship that had gone sour seven to 10 years before," she said.

"Family members of both indicated that this grudge had continued. It had been expressed as recent as the Christmas before where the appellant accused Mr. Liknes of stealing property from his farm."

Appeal Court Justice Peter Martin challenged the defence's suggestion that there wasn't any reason to believe that the victims might be at the farm.

"These people are taken away and police are wondering who would do this? So who would have a grudge against these people?" Martin said.

"Is it a surprise that suspicions arose that maybe he's the one? We're talking about a unique vehicle, at three in the morning, in (their) neighbourhood. What is it doing there?"