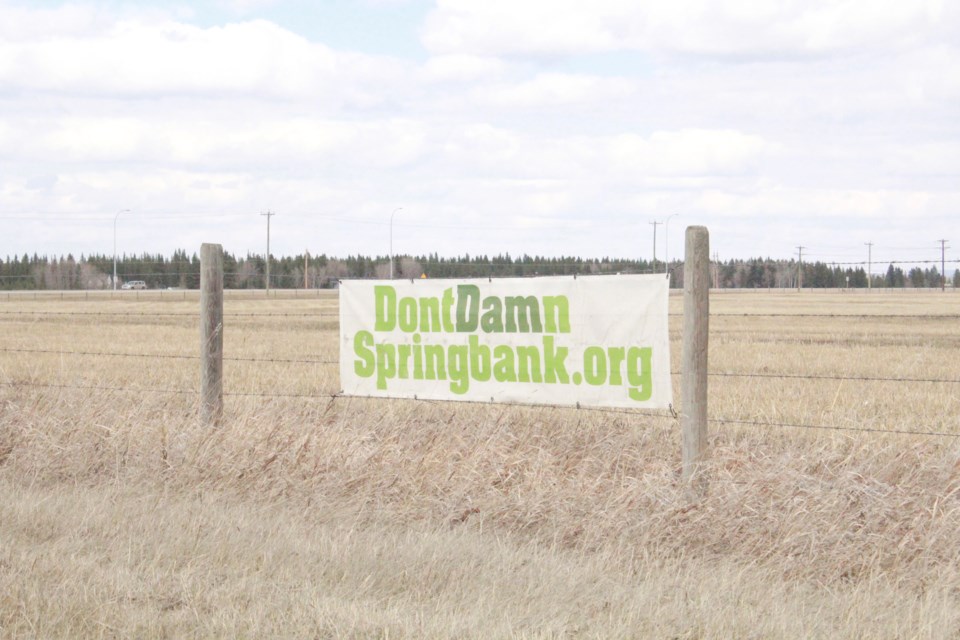 Despite continued opposition from local residents, the provincial government has appointed a lawyer to look at ways to move the controversial Springbank Off-stream Reservoir project forward. File Photo/Rocky View Publishing

The newly-elected provincial government is taking steps to expedite the construction of the controversial Springbank Off-Stream Reservoir (SR1), despite continued opposition from local groups.

The Government of Alberta announced May 3 it had appointed lawyer Michael Ignasiak, a partner at the law firm Osler, Hoskin & Harcourt LLP, to find ways to fast track the project. According to the press release, Ignasiak “has extensive experience developing and executing strategies to obtain regulatory approvals for large-scale projects.”

“We need an independent expert to evaluate the SR1 project and determine what can be done to move this project forward,” said newly-appointed Minister of Transportation Ric McIver in a press release. “We are confident that Ignasiak will help us move quickly to protect the safety and economic security of Calgary and those living in other communities downstream of the Elbow River.”

SR1 is currently under review by the Canadian Environmental Assessment Agency (CEAA), Alberta Environment and Parks, and the Natural Resources Conservation Board.

The project has been met by wide-spread opposition within Rocky View County (RVC), and groups continue to push for a different flood mitigation solution in the region. Lee Drewry, a landowner involved with the grassroots Don’t Damn Springbank initiative, said he was disappointed by the new government’s announcement – but added he was holding out hope the regulatory review process would reveal SR1 as a bad project.

While the government pushes ahead, Drewry said opposition to SR1 has also gained steam. He attended an open house hosted by the Springbank Community Association (SCA) May 7, which he said raised important questions about the impacts of the project on the broader community, outside of impacted landowners. A second open house took place the following evening.

“The conversation is not just about landowners anymore, and it should never have been just about the landowners, because it’s much broader,” Drewry said. “This project impacts the whole community – the whole county, actually. Unfortunately, it’s been spun as 20 landowners against 1.2 million people in Calgary, which is just such a false narrative.”

Karin Hunter, president of SCA, said she was pleased with the turnout to both events.

“We wanted to give our community a chance to hear the latest information from our perspective, because the only perspective that’s ever been shared by the provincial government is very one-sided,” she said.

According to Hunter, the open houses demonstrated that people are energized on the issue, and are interested in finding a solution that works not only for Calgary, but for the entire region.

Drewry and Hunter said they were also heartened by the discovery of another ally. In a letter to McIver dated May 7, new Banff-Kananaskis MLA Miranda Rosin said SR1 was insufficient to protect upstream communities from flooding.

“We need to protect Albertans from future flooding, but we should not protect only a few at the expense and detriment of the others,” she wrote. “We must ensure that all Albertans in affected flood areas are safe from harm.”

In her letter, Rosin requested McIver undertake two actions while the CEAA reviews the project – consider other flood mitigation strategies and engage in consultations with the residents of Springbank, Bragg Creek, Redwood Meadows and Tsuut’ina First Nation.

Ultimately, Drewry and Hunter both said they continued to hope for a different flood solution on the Elbow River, and would continue working to make that a reality.

“This is not just about the land owners, this is our whole community,” Hunter said. “There’s 12,000 or so residents in west RVC. We’re more than dwarfed by the City of Calgary, we get that. But if there’s a solution that would protect us all, why wouldn’t we take that opportunity to get this done right?”